From Infogalactic: the planetary knowledge core
Jump to: navigation, search
This article is about a major work of Virgil. For the genre of poetry known as "bucolics" or "eclogues", see Eclogue. For the poems by Dante, see Eclogues (Dante). 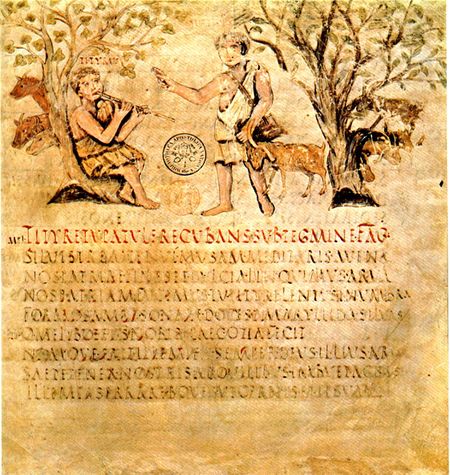 The opening lines of the Eclogues in the 5th-century Vergilius Romanus.

The Eclogues (/ˈɛklɒɡz/; Latin: Eclogae [ˈɛklɔɡaj]), also called the Bucolics, is the first of the three major works of the Latin poet Virgil.

Virgil's book contains ten pieces, each called not an idyll but an eclogue ("draft" or "selection" or "reckoning"), populated by and large with herdsmen imagined conversing and performing amoebaean singing in largely rural settings, whether suffering or embracing revolutionary change or happy or unhappy love. Performed with great success on the Roman stage, they feature a mix of visionary politics and eroticism that made Virgil a celebrity, legendary in his own lifetime.

Capping a sequence or cycle in which Virgil created and augmented a new political mythology, "Eclogue 4" reaches out to imagine a golden age ushered in by the birth of a boy heralded as "great increase of Jove," which ties in with divine associations claimed in the propaganda of Octavian, the ambitious young heir to Julius Caesar. The poet makes this notional scion of Jove the occasion to predict his own metabasis up the scale in epos, rising from the humble range of the bucolic to the lofty range of the heroic, potentially rivaling Homer: he thus signals his own ambition to make Roman epic that will culminate in the Aeneid. In the surge of ambition, Virgil also projects defeating the legendary poet Orpheus and his mother, the epic muse Calliope, as well as Pan, the inventor of the bucolic pipe, even in Pan's homeland of Arcadia, which Virgil will claim as his own at the climax of his eclogue book in the tenth eclogue. Biographical identification of the fourth eclogue's child has proved elusive; but the figure proved a link between traditional Roman authority and Christianity. The connection is first made in the Oration of Constantine [1] appended to the Life of Constantine by Eusebius of Caesarea (a reading to which Dante makes fleeting reference in his Purgatorio). Some scholars have also remarked similarities between the eclogue's prophetic themes and the words of Isaiah 11:6: "a little child shall lead."

"Eclogue 5" articulates another significant pastoral theme, the shepherd-poet's concern with achieving worldly fame through poetry. This concern is related to the metabasis Virgil himself undertakes thematically in "Eclogue 4." In "Eclogue 5," the shepherds Menalcas and Mopsus mourn their deceased companion Daphnis by promising to “praise… Daphnis to the stars— / yes, to the stars raise Daphnis.” Menalcas and Mopsus praise Daphnis out of compassion, but also out of obligation. Daphnis willed that his fellow shepherds memorialize him by making a “mound and add[ing] above the mound a song: / Daphnis am I in woodland, known hence far as the stars." Not only are Daphnis’s survivors concerned with solidifying and eternizing his poetic reputation, but the dead shepherd-poet himself is involved in self-promotion from beyond the grave through the aegis of his will. It is an outgrowth of the friendly poetic rivalries that occur between them, and of their attempts to best the gods, usually Pan or Phoebus, at their lyric craft. At the end of “Eclogue 5,” Daphnis is deified in the shepherds’ poetic praise: “‘A god, a god is he, Menalcas!’ / …Here are four altars: / Look, Daphnis, two for you and two high ones for Phoebus." Menalcas apostrophizes Daphnis with a promise: “Always your honor, name and praises will endure." Ensuring poetic fame is a fundamental interest of the shepherds in classical pastoral elegies, including the speaker in Milton's "Lycidas."[2]

In "Eclogue 10," Virgil caps his book by inventing a new myth of poetic authority and origin: he replaces Theocritus' Sicily and old bucolic hero, the impassioned oxherd Daphnis, with the impassioned voice of his contemporary Roman friend, the elegiac poet Gaius Cornelius Gallus, imagined dying of love in Arcadia. Virgil transforms this remote, mountainous, and myth-ridden region of Greece, homeland of Pan, into the original and ideal place of pastoral song, thus founding a richly resonant tradition in western literature and the arts.