Economic and Monetary Union of the European Union 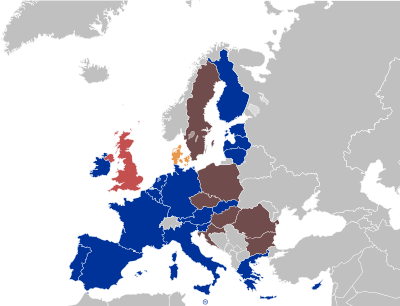 The Economic and Monetary Union (EMU)[1][2] is an umbrella term for the group of policies aimed at converging the economies of all member states of the European Union at three stages. Both the 19 eurozone states and the 9 non-euro states are EMU members. A Member State however needs to comply and be a part of the "third EMU stage", before being able to adopt the euro currency; and as such the "third EMU stage" has also become largely synonymous with the eurozone.

All Member States of the European Union, except Denmark and the United Kingdom, have committed themselves by treaty to join the "third EMU stage". The Copenhagen criteria is the current set of conditions of entry for new states wanting to join the EU. It contains the requirements that need to be fulfilled and the time framework within which this must be done, in order for a country to join the monetary union. An important element of this, is a participation for minimum two years in the European Exchange Rate Mechanism ("ERM II"), in which candidate currencies demonstrate economic convergence by maintaining limited deviation from their target rate against the euro.

Nineteen member states of the European Union, including most recently Lithuania, have entered the "third EMU stage" and have adopted the euro as their currency. Denmark participate in the Exchange Rate Mechanism (ERM II). Denmark and United Kingdom has received a special opt out from the EU Treaties, allowing for a permanent membership of ERM II, without being required to enter into the "third EMU stage". In regards of the remaining non-euro member states (Sweden, Poland, Czech Republic, Hungary, Romania, Bulgaria and Croatia), they are committed by treaty to enter the third stage upon the time of complying with all convergence criteria; of which the last one (ERM II membership) however is something the member state can choose not to apply for, if they do not want to adopt the euro. The non-euro EU member states will continue to use their own local and historic currencies.

First idea of an economic and monetary union in Europe were raised well before establishing the European Communities. For example, already in the League of Nations, Gustav Stresemann asked in 1929 for a European currency[3] against the background of an increased economic division due to a number of new nation states in Europe after World War I.

A first attempt to create an economic and monetary union between the members of the European Communities goes back to an initiative by the European Commission in 1969, which set out the need for "greater co-ordination of economic policies and monetary cooperation,"[4] which was followed by the decision of the Heads of State or Government at their summit meeting in The Hague in 1969 to draw up a plan by stages with a view to creating an economic and monetary union by the end of the 1970s.

On the basis of various previous proposals, an expert group chaired by Luxembourg’s Prime Minister and Finance Minister, Pierre Werner, presented in October 1970 the first commonly agreed blueprint to create an economic and monetary union in three stages (Werner plan). The project experienced serious setbacks from the crises arising from the non-convertibility of the US dollar into gold in August 1971 (i.e., the collapse of the Bretton Woods System) and from rising oil prices in 1972. An attempt to limit the fluctations of European currencies, using a snake in the tunnel, failed.

The debate on EMU was fully re-launched at the Hannover Summit in June 1988, when an ad hoc committee (Delors Committee) of the central bank governors of the twelve member states, chaired by the President of the European Commission, Jacques Delors, was asked to propose a new timetable with clear, practical and realistic steps for creating an economic and monetary union.[5] This way of working was derived from the Spaak method.

The Delors report of 1989 set out a plan to introduce the EMU in three stages and it included the creation of institutions like the European System of Central Banks (ESCB), which would become responsible for formulating and implementing monetary policy.[6]

The three stages for the implementation of the EMU were the following:

There have been debates as to whether the Eurozone countries constitute an optimum currency area.[7]

There has also been a lot of doubt if all eurozone states really fulfilled a "high degree of sustainable convergence" as demanded by the Maastricht treaty as condition to join the Euro without getting into financial trouble later on.

Since membership of the eurozone establishes a single monetary policy for the respective states, they can no longer use an isolated monetary policy, e.g. to increase their competitiveness at the cost of other eurozone members by printing money and devalue, or to print money to finance excessive government deficits or pay interest on unsustainable high government debt levels. As a consequence, if member states do not manage their economy in a way that they can show a fiscal discipline (as they were obliged by the Maastricht treaty), they will sooner or later risk a sovereign debt crisis in their country without the possibility to print money as an easy way out. This is what happened to Greece, Ireland, Portugal, Cyprus, and Spain.[8]

Plans for a Genuine Economic and Monetary Union

Being of the opinion that the pure austerity course was not able to solve the Euro-crisis, French President François Hollande reopened the debate about a reform of the architecture of the Eurozone. The intensification of work on plans to complete the existing EMU in order to correct its economic errors and social upheavals soon introduced the keyword "genuine" EMU.[9] At the beginning of 2012, a proposed correction of the defective Maastricht currency architecture comprising: introduction of a fiscal capacity of the EU, common debt management and a completely integrated banking union, appeared unlikely to happen.[10] Additionally, there were a widespread fear that a process of strengthening the Union's power to intervene in eurozone member states and to impose flexible labour markets and flexible wages, might constitute a serious threat to Social Europe.[11]

In December 2012, at the height of the European sovereign debt crisis, which revealed a number of weaknesses in the architecture of the EMU, a report entitled "Towards a genuine Economic and Monetary Union" was issued by the four presidents of the Council, European Commission, ECB and Eurogroup. The report outlined the following roadmap for implementing actions being required to ensure the stability and integrity of the EMU:[12]

In June 2015, a follow-up report entitled "Completing Europe's Economic and Monetary Union" was issued by the five presidents of the Council, European Commission, ECB, Eurogroup and European Parliament. The report outlined the following roadmap for implementing further EMU-deepening actions, being required to ensure a smooth functioning of the currency union and to allow the member states to be better prepared for adjusting to global challenges:[15]

All of the above three stages are envisaged to bring further progress on all four dimensions of the EMU:[15]