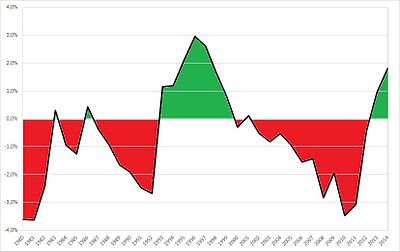 The unification of Italy in 1861-70 broke down the feudal land system that had survived in the south since the Middle Ages, especially where land had been the inalienable property of aristocrats, religious bodies, or the king. The breakdown of feudalism, however, and redistribution of land did not necessarily lead to small farmers in the south winding up with land of their own or land they could work and profit from. Many remained landless, and plots grew smaller and smaller and thus more and more unproductive as land was subdivided among heirs.[1]

A factory in Turin, set in 1898, during the period of industrialisation.

The Italian diaspora did not affect all regions of the nation equally, principally low income agricultural areas with a high proportion of small peasant land holdings. In the second phase of emigration (1900 to World War I) most emigrants were from the south and most of them were from rural areas, driven off the land by inefficient land management policies. Robert Foerster, in Italian Emigration of our Times (1919) says, " [Emigration has been]…well nigh expulsion; it has been exodus, in the sense of depopulation; it has been characteristically permanent.[2] ".

Mezzadria, a form of sharefarming where tenant families obtained a plot to work on from an owner and kept a reasonable share of the profits, was more prevalent in central Italy, which is one of the reasons why there was less emigration from that part of Italy. Although owning land was the basic yardstick of wealth, farming in the south was socially despised. People did not invest in agricultural equipment but in such things as low-risk state bonds.[1]

Italy had emerged from World War I in a poor and weakened condition. The National Fascist Party of Benito Mussolini came to power in Italy in 1922, at the end of a period of social unrest. During the first four years of the new regime, from 1922 to 1925, the Fascist had a generally laissez-faire economic policy: they initially reduced taxes, regulations and trade restrictions on the whole.[3] However, "once Mussolini acquired a firmer hold of power... laissez-faire was progressively abandoned in favour of government intervention, free trade was replaced by protectionism and economic objectives were increasingly couched in exhortations and military terminology."[4] In 1929, Italy was hit hard by the Great Depression.[5] Trying to handle the crisis, the Fascist government nationalized the holdings of large banks which had accrued significant industrial securities.[6] A number of mixed entities were formed, whose purpose it was to bring together representatives of the government and of the major businesses. These representatives discussed economic policy and manipulated prices and wages so as to satisfy both the wishes of the government and the wishes of business. This economic model based on a partnership between government and business was soon extended to the political sphere, in what came to be known as corporatism.

Throughout the 1930s, the Italian economy maintained the corporatist model that had been established during the Great Depression. At the same time, however, Mussolini had growing ambitions of extending Italy's foreign influence through both diplomacy and military intervention. After the invasion of Ethiopia, Italy began supplying both troops and equipment to the Spanish nationalists under General Francisco Franco, who were fighting in the Spanish Civil War against a leftist government. These foreign interventions required increased military spending, and the Italian economy became increasingly subordinated to the needs of its armed forces. By 1939, Italy had the highest percentage of state-owned enterprises after the Soviet Union.[7][8][9]

Finally, Italy's involvement in World War II as a member of the Axis powers required the establishment of a war economy. This put severe strain on the corporatist model, since the war quickly started going badly for Italy and it became difficult for the government to persuade business leaders to finance what they saw as a military disaster. The Allied invasion of Italy in 1943 caused the Italian political structure — and the economy — to rapidly collapse. The Allies, on the one hand, and the Germans on the other, took over the administration of the areas of Italy under their control. By the end of the war, the Italian economy had been all but destroyed; per capita income in 1944 was at its lowest point since the beginning of the 20th century.[10]

The Italian economy has had very variable growth. In the 1950s and early 1960s, the Italian economy was booming, with record high growth rates, including 6.4% in 1959, 5.8% in 1960, 6.8% in 1961, and 6.1% in 1962. This rapid and sustained growth was due to the ambitions of several Italian businesspeople, the opening of new industries (helped by the discovery of hydrocarbons, made for iron and steel, in the Po valley), re-construction and modernisation of most Italian cities, such as Milan, Rome and Turin, and the aid given to the country after World War II (notably the Marshall Plan).

After 1964, Italy maintained for a while a constant growth rate of above 8% every year.[11] Despite this, due to political, economical and social problems in the country during the late-1960s and most of the 1970s,[12] the economy went stagnant and entered its first recession after that of the late-1940s. The problems included an increasingly high inflation rate, high energy prices (Italy is highly dependent on foreign oil and natural gas resources). This economic recession went on into the early-1980s until a reduce of public costs and spendings, tighter budgets and deficits, a steady economic growth, and a lowered inflation rate meant that by the recovery plan of 1983, Italy left recession.[12] This plan led to an increasing GDP growth, lower inflation, and increased industrial/agricultural/commercial produce, exports and output, yet made the unemployment rate rise.[12] A decrease in energy prices and lowered value of the dollar led to foreign exchange being liberalised and the economy to re-grow rapidly.[12] As a matter of fact, in 1987, Italy had a period when it surpassed the British economy, becoming the sixth in the world.

The 1970s and 1980s was also the period of investment and rapid economic growth in the South, unlike Northern and Central Italy which mainly grew in the 1950s and early 1960s. The "Vanoni Plan" ensured that a new programme to help growth in the South called "Cassa per il Mezzogiorno" (Funds for the "Mezzogiorno" (a slang for Southern Italy, literally meaning "midday")) was put in place. Investment was worth billions of US dollars: from 1951–1978, the money given to the South was $11.5 billion for infrastructure,[12] $13 billion for low-cost loans,[12] and outrighted grants were worth $3.2 billion.[12]

On 15 May 1991, Italy became the fourth worldwide economic power, overcoming France,[13] called the "secondo sorpasso" with a GDP of US$1.268 trillion, compared to France's GDP of US$1.209 trillion and Britain's of US$1.087 trillion. Despite this, however, Italy's alleged, according to the Economist's, 1987 GDP growth of a phenomenal 18%,[14][15] Italy was shortly re-overtaken by both France and the United Kingdom after Britain's economic growth and the arrival of a new strong pound sterling.

By the 1990s, the Italian government was fighting to lower the internal and external debt, liberalise the economy, reduce governmental spending, selling business and enterprises owned by the state, and trying to stop tax evasion;[12] the liberalisation of the economy meant that Italy was able to enter the EMU (European Monetary Union) and it later, in 1999, qualified to enter the eurozone. However, the main problem which plagued the 1990s, and still plagues the economy today, was tax evasion and underground "black market" business, whose value is an estimated 25% of the country's gross domestic product.[12] Despite social and political attempts to reduce the difference in wealth between the North and South, and Southern Italy's modernisation, the economic gap remained still pretty wide.[12]

In the 1990s, and still today, Italy's strength was not the big enterprises or corporation, but small to middle-sized family owned businesses and industries, which mainly operated in the North-Western "economic/industrial triangle" (Milan-Turin-Genoa). Italy's companies are comparatively smaller than those of similar countries in size or of the EU, and rather than the common trend of less, yet bigger businesses, Italy concentrated on more, yet smaller enterprises. This can be seen in the fact, that the average workers per company in the country is of 3.6 employees (8.7 for industrial/manufacturing-orientated businesses), compared to the Western European Union average of 15 workers.[12] 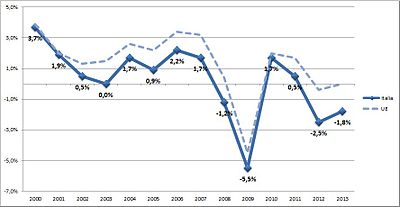 Italy's economy in the 21st century has been mixed, experiencing both relative economic growth and stagnation, recession and stability. As of the late 2000s recession, more notably the 2008 recession and the 2009 recession, Italy was one of the few countries whose economy did not contract dramatically, and kept a relatively stable economic growth, yet figures for economic growth in 2009 and 2010 have showed a negative average, ranging from around -1% to -5%.[16] The late-first decade of the 21st century recession has also gripped Italy; car sales in Italy have fallen by almost 20 percent over each of the past two months. Italy's car workers' union said; "The situation is evidently more serious than had been understood."[17] On 10 July 2008 economic think tank ISAE lowered its growth forecast for Italy to 0.4 percent from 0.5 percent and cut the 2009 outlook to 0.7 percent from 1.2 percent.[18] Analysts have predicted Italy had entered a recession in the second quarter or would enter one by the end of the year with business confidence at its lowest levels since the September 11 attacks.[19] Italy's economy contracted by 0.3 percent in the second quarter of 2008.[20]

ISTAT predicts that Italy's falling economic growth rate is due to a general decrease in the country's industrial production and exports.[21] However, the Government of Italy believes that 2010 and beyond will bring higher growth rates: anything from circa +0.7% - +1.1%.[21]

A table showing the different compositions of the Italian economy: