This figure illustrates the percentages of a country's economy made up by different sector. The figure illustrates that countries with higher levels of socio-economic development tend to have less of their economy made up of primary and secondary sectors and more emphasis in tertiary sectors. The less developed countries exhibit the inverse pattern. 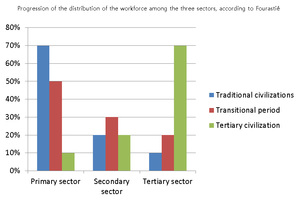 Three sectors according to Fourastié 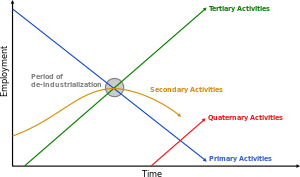 The classical breakdown of all economic sectors follows:[1]

In the 20th century, it began to be argued that traditional tertiary services could be further distinguished from "quaternary" and quinary service sectors.[2]

An economy may include several sectors (also called industries), that evolved in successive phases.

Even in modern times, developing countries tend to rely more on the first two sectors, compared to developed countries.

An economy can also be divided along different lines: