Belize has a small, essentially private enterprise economy that is based primarily on agriculture, tourism, and services. The cultivation of newly discovered crude oil in the town of Spanish Lookout has presented new prospects and problems for this developing nation.[7] Besides petroleum, Belize's other primary exports are citrus, sugar, and bananas. Belize's trade deficit has been growing, mostly as a result of low export prices for sugar and bananas.[citation needed]

The new government faces important challenges to economic stability. Rapid action to improve tax collection has been promised, but a lack of progress in reining in spending could bring the exchange rate under pressure. The Belize Dollar is fixed to the U.S. dollar at a rate of 2:1.[8]

Domestic industry is limited, constrained by relatively high-cost labour and energy and a small domestic market. Tourism attracts the most foreign direct investment although significant foreign investment is also found in the energy, telecommunications, and agricultural sectors.

Belize's economy depended on forestry until well into the 20th century. Logwood, used to make dye, was Belize's initial main export. However, the supply outstripped the demand, especially as Europeans developed man-made dyes which were less expensive. Loggers turned to mahogany, which grew in abundance in the country's forests. The wood was prized for use in cabinets, ships, and railroad carriers.

While many merchants and traders became wealthy from the mahogany industry, ups and downs in the market had a large impact on the economy. In addition, new mahogany trees weren't being planted, because mahogany trees grow slowly; the rate of natural regrowth necessitated a large, long-term investment in tree farming, which was not made. As the 19th century progressed, loggers were forced to go deeper into the forests to find the trees, increasing labour costs.

Variations of mahogany exports over long periods of time were linked to the accessible supply of the resource. Thus, improvements in hauling methods helped the cutters satisfy increasing demands for mahogany by enabling them to extract timber from areas in the interior that had been previously inaccessible to them. Immediately after the introduction of cattle in the early 19th century, tractors in the 1920s, and lorries in the 1940s, production levels rose dramatically.

When the supply of accessible timber dwindled and logging became too unprofitable in the 20th century, the country's economy shifted to new sectors. Cane sugar became the principal export and recently has been augmented by expanded production of citrus, bananas, seafood, and apparel. The country has about 8,090 km² of arable land, only a small fraction of which is under cultivation. To curb land speculation, the government enacted legislation in 1973 that requires non-Belizeans to complete a development plan on land they purchase before obtaining title to plots of more than 10 acres (40,000 m²) of rural land or more than one-half acre (2,000 m²) of urban land.

Banana production accounted for 16 percent of total Belizean exports in 1999.[9] 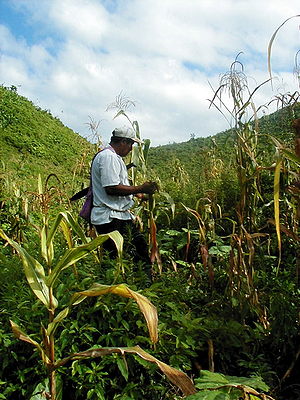 Agriculture is a key part of the economy

A major constraint on a functioning market economy in Belize continues to be the scarcity of infrastructure investments. Although electricity, telephone, and water utilities are all relatively good, Belize has the most expensive electricity in the region. Several capital projects are currently underway. The largest of these is a $15 million rural electrification program to be jointly implemented by the government and Belize Electricity Limited (BEL).

A combination of factors—climate, the Belize Barrier Reef (longest in the Western Hemisphere), 127 offshore Cayes (islands), excellent fishing, safe waters for boating, scuba diving, and snorkeling, abundant jungle flora and fauna, and numerous Mayan ruins—support the thriving tourism and ecotourism industry. Development costs are high, but the Government of Belize has designated tourism as its second development priority after agriculture.

In 2011, tourist arrivals totaled 888,191 (mostly from the U.S.) and tourist receipts amounted to $260 million.[10] The travel and tourism industry in 2011 directly contributed 350.6 million BZD (176 million USD) to Belize's GDP (12.0% of GDP). This primarily reflects the economic activity directly generated by industries supported by tourists, such as hotels, restaurants, leisure industries, travel agents, airlines and other transportation services. The total contribution to GDP in 2011 (including wider effects from investment, the supply chain, and induced income impacts) was 971.9 million BZD (486 million USD) (33.2% of GDP). Travel and tourism directly generated 14,500 jobs in 2011 (10.9% of total employment) and, including indirect and induced effects, supported 40,000 jobs (30.1% of total employment).[11] 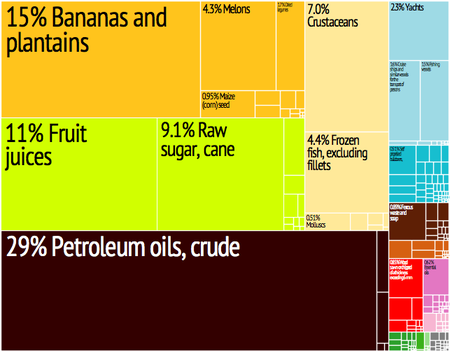 A proportional representation of Belizean exports, 2010.

Belize's economic performance is highly susceptible to external market changes. Although moderate growth has been achieved in recent years, the achievements are vulnerable to world commodity price fluctuations and continuation of preferential trading agreements, especially with the U.S. (cane sugar) and UK (bananas).

Belize continues to rely heavily on foreign trade with the United States as its number one trading partner. Total imports in 2000 totaled $446 million while total exports were only $349.9 million. In 2000, the U.S. accounted for 48.5% of Belize's total exports and provided 49.7% of all Belizean imports. Other major trading partners include the European Union, Canada, Mexico, and Caribbean Community (CARICOM) member states. Belize established a preferential trade agreement with Guatemala in 2010.

Belize aims to stimulate the growth of commercial agriculture through CARICOM. Belizean trade with the rest of the Caribbean is small compared to that with the United States and Europe. Belize is a beneficiary of the Caribbean Basin Initiative (CBI), a U.S. Government program to stimulate investment in Caribbean nations by providing duty-free access to the U.S. market for most Caribbean products.

Significant U.S. private investments in citrus and shrimp farms have been made in Belize under CBI. U.S. trade preferences allowing for duty-free re-import of finished apparel cut from U.S. textiles have significantly expanded the apparel industry. EU and UK preferences also have been vital for the expansion and prosperity of the sugar and banana industries.

In 1990, Belize enacted the International Business Companies Act based on the British Virgin Islands model. In ten years, Belize has registered more than 15,000 IBCs. A Belizean IBC is a corporate vehicle for international financial transactions and allows the investor to engage in activities including asset protection, operating bank accounts, brokerage accounts, ship ownership, and commission arrangements.

The IBC legislation was supplemented in 1992 with the enactment of a Trusts Act which provides for both onshore and offshore trusts.[12]

Belize IBCs have the following features: