Chicago Board of Trade

Chicago and its suburbs, which together comprise the Chicago Metropolitan Area, is home to 29 Fortune 500 companies and is a transportation and distribution center. Manufacturing, printing, publishing, insurance and food processing also play major roles in the city's economy. The total economic output of Chicago in GMP totaled 547 billion in 2012[1] making Chicago the 21st largest economy in the world[2] just surpassing the total economic output of Switzerland.

The central downtown area has experienced a resurgence, in contrast to recent years, with construction of major new condominium and Class A office buildings. These include the 92-story Trump Tower Chicago, Lakeshore East development, and the 300 North Lasalle office building. Since the recession, other projects, like the planned 150-story 2000 foot Chicago Spire by architect Santiago Calatrava, have now been cancelled.[3] Many city neighborhoods are gentrifying at a rapid pace as well, including Humboldt Park, Logan Square, Pilsen, Uptown, Near Southside, and Rogers Park. The massive expansion of O'Hare International Airport and recently reconstructed Dan Ryan Expressway will shape development patterns for years to come.

Changes in house prices for the Chicago metropolitan area are publicly tracked on a regular basis using the Case–Shiller index; the statistic is published by Standard & Poor's and is also a component of S&P's 10-city composite index of the value of the residential real estate market. Home prices in Chicago advanced 7.8% in March 2013 over March 2012[4]

The city houses one of the Federal Reserve Banks, established in 1914. There is also the Federal Home Loan Bank of Chicago. The largest banks in the Chicago region (by % of deposits) are: JPMorgan Chase, Bank of America (through its acquisition of LaSalle Bank), BMO Harris Bank (a BMO subsidiary), and Northern Trust. The largest banks headquartered in Chicago are: Northern Trust, Chase, BMO Harris Bank, Wintrust Financial, and First Midwest Bank. Many financial institutions are in the Loop. 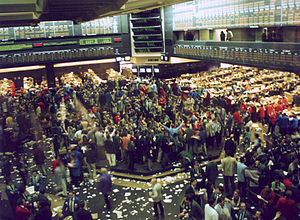 Chicago Board of Trade

Before it was incorporated as a town in 1833, the primary industry was fur trading. In the 1770s, Jean Baptiste Pointe du Sable, the area's first resident and Haitian-born fur trader, established a fur trading post in the area which later became known as Fort Dearborn, along the bank of the Chicago River, where he traded until relocating again in 1800.[6]

The American Fur Company, established in 1808 by John Jacob Astor to compete with the powerful Canadian North West and Hudson Bay companies, practically took control of the fur trade in the United States following the War of 1812. It quickly became known for its ruthless practice of buying out or destroying the competition, as most private traders in Chicago soon found out. It appointed John Kinzie and Antoine Deschamps as its first agents in northern Illinois, and they reported to the company's headquarters on Mackinac Island. Their field of operations covered northeastern Illinois and the Illinois River. In 1819, Charles H. Beaubien was brought in to assist Kinzie and eventually became head of the outfit. Gurdon S. Hubbard replaced Deschamps in 1823 but soon went on his own by purchasing all interests of the company in Illinois.

Late in the 19th century, Chicago was part of the bicycle craze, as home to Western Wheel Company, which introduced stamping to the production process and significantly reduced costs,[7] while early in the 20th Century, the city was part of the automobile revolution, hosting the brass era car builder Bugmobile, which was founded there in 1907.[8]

It was also home to Grigsby-Grunow, which manufactured radios under the Majestic brand until the company failed in 1934.[9] (Majestic Radio and Television Corporation preserved the Majestic name, while General Household Utilities kept Grunow alive.)[10] Chicago also hosted E. H. Scott's Scott Transformer Company, which introduced a high-grade radio in 1928, and grew into Scott Radio Laboratories;[11] this was located at 4450 Ravenswood Avenue in 1946,[11] and produced "very expensive, beautifully-designed, chrome-plated chassis".[12] It added "a line of high-quality television sets in 1949".[13] Other entrants in this business were Zenith, which started life there in 1918, entering auto radios in the 1930s,[14] and Galvin Manufacturing Corporation, which started manufacturing power supplies in 1928 and went on to automobile radios under the Motorola marque in 1930,[15] as well as Walkie-talkie and Handie-Talkie and for the Army.[15]

Modern-day futures and commodity trading markets were pioneered in Chicago.[citation needed] A number of events led to this, along with Chicago's transportation systems and geographic proximity to the rest of the country. Massive amounts of goods passed through Chicago from places in the Mississippi Valley such as St. Louis, Missouri. Grain was stored in Chicago, and people began buying contracts on it. Later, people as far away as New York City began buying contracts by telegraph on the goods that would be stored in Chicago in the future. From this were established the Chicago Board of Trade (CBOT), the Chicago Mercantile Exchange (CME), and the modern systems in use today for futures and commodity trading.