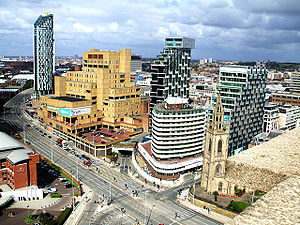 The Economy of Liverpool encompasses a wide range of economic activity that occurs within and surrounding the city of Liverpool, England. With a population of over 1.3 million in its Larger Urban Zone, and a metropolitan area population of 2,241,000, Liverpool is one of the largest cities in the United Kingdom and sits at the centre of the broader Merseyside economic area, which is itself one of the two core economies of the North west of England.[1]

By sector, Liverpool's GVA is predominantly produced through service sector industries, with industry accounting for almost all of the rest.[4] 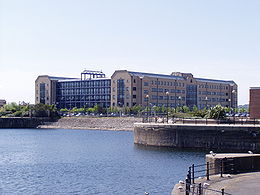 In common with much of the rest of the UK today, Liverpool's economy is dominated by service sector industries, both public and private. In 2007, over 60% of all employment in the city was in the public administration, education, health, banking, finance and insurance sectors.[3]

Public Administration, Education and Health are combined, the single largest employment sector within Liverpool's economy, accounting for approximately 40% of all jobs in the city.[3] Despite a recent fall in the number of jobs, the level of employment in these sectors remains higher than the average for the other core cities of England.[3]

Liverpool is an important centre for public administration having offices from several government departments and non-departmental public bodies, in addition to local government agencies. Agencies such as HM Passport Office,[5][6] Criminal Records Bureau,[7][8] and Her Majesty's Revenue and Customs[9][10] all have offices in the city.

Due to the economic recession of the late 2000s (decade), Liverpool Council, along with other local authorities within the United Kingdom, has had a significant reduction in its budget. During the 2011/12 tax year, Liverpool has had a 22% reduction in its council budget amounting to a figure of £91m and, as a result, has announced that up to 1200 jobs may be lost during the year. It will also have to make a further £50m of savings during the 2012/13.[11]

The banking, finance and insurance sectors are one of the fastest growing areas of Liverpool's economy with a 5.3% increase in jobs in these areas 2006/07.[3] Major private sector service industry concerns have also invested in Liverpool especially the financial services sector with Barclays, JPMorgan, Abbey National, Alliance & Leicester, Royal Bank of Scotland Group, HBOS and the Bank of Ireland either opening or expanding their sites, a number of major call centres have opened in recent years too and the professional advice sector. 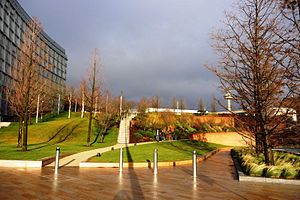 Chavasse Park, located on the waterfront by Liverpool One
See also: Landmarks in Liverpool and Culture of Liverpool

Tourism is a major factor in the economy and this has led to a great increase in the provision of high quality services such as hotels, restaurants and clubs.

Liverpool is one of the few cities in the world where cruise liners can berth in the city centre, and from 2008 a significant number of ships called at Liverpool's cruise liner terminal, including the Grand Princess, and the Queen Elizabeth 2. From 2013 Liverpool will start cruise turnaround operations from the cruise liner terminal attracting cruise passengers from the north of England and the Midlands.[12] Large visiting naval ships draw large crowds. Liverpool and its boroughs have a large number of sandy beaches accessible by Merseyrail, which prove popular in the summer months.

The buildings and districts of Liverpool attract film makers, who regularly use Liverpool to double for cities around the world making it the second most filmed city in the UK.[13] 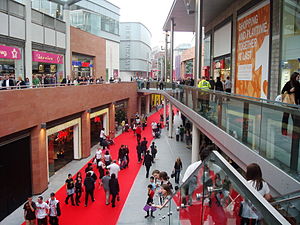 Liverpool's main shopping area consists of numerous streets and shopping centres. Amongst the larger predominantly retail orientated streets in Liverpool city centre are Church Street, Lord Street, Bold Street and Mathew Street. Liverpool One opened fully in October 2008 being the redevelopment of a large part of the postcode area L1—hence the name. It is also partly built on the old Chavasse Park, but much of the park still remains. Previous to the opening of the Liverpool One complex, St. John's Shopping Centre was the largest shopping centre in Liverpool, it still remains the largest covered shopping centre in the city. Clayton Square Shopping Centre is also located in the very centre of the city as is Metquarter, an upmarket shopping centre consisting primarily of boutique stores which opened in 2006. Another ambitious retail project for Liverpool city centre was also approved for construction in 2010, Central Village will be built around Liverpool Central railway station and Lewis's Department Store. This will further enhance Liverpool's status as a major retail destination in the UK with it already being ranked in the national top five. New Strand Shopping Centre and New Mersey Shopping Park are two other large shopping complexes in the Liverpool Urban Area, in Bootle and Speke respectively.

Growth in the areas of New Media has been helped by the existence of a relatively large computer game development community. Sony based one of only a handful of European PlayStation research and development centres in Wavertree, after buying out noted software publisher Psygnosis. According to a 2006 issue of industry magazine 'Edge' (issue 162), the first professional quality PlayStation software developer's kits were largely programmed by Sony's Liverpool 'studio'. Other notable development studios include the Activision-owned Bizarre Creations, and Sony-owned Evolution Studios.

Car-manufacturing also takes place in the city at the Halewood plant where the Jaguar X-Type and Land Rover Freelander models are assembled. The X-Type ceased production in 2010 however, the new Range Rover Evoque filled the gap when production began in the Spring of 2011.

The owner of Liverpool's port and airport, Peel Holdings, announced on 6 March 2007 that is had plans to redevelop the city's northern dock area with a scheme entitled Liverpool Waters, which may see the creation of 17,000 jobs and £5.5bn invested in the vicinity over a 50 year period. This is coupled with a sister scheme on the other side of the River Mersey, called Wirral Waters.[citation needed]

In recent years, the Port of Liverpool has seen somewhat of a revival, with both Japanese firm NYK and Danish firm Maersk Line locating their UK headquarters to the city.[14][15]

The port is being expanded with plans to construct a post-Panamax container terminal, for ships wider than the Panama Canal locks, and will be capable of handling ships carrying 13,500 containers, compared to the current limit of 3,500 in Liverpool.[16]