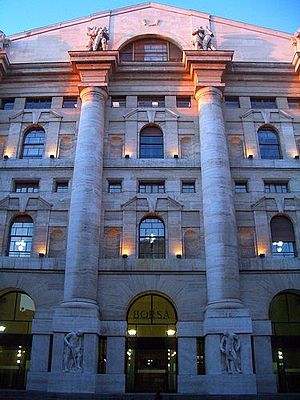 Milan is one of the EU's and the world's major financial and business centres, with the Milan metropolitan area having a 2004 GDP of €241.2 billion (US$312.3 billion), which means that it has Europe's 4th highest GDP. This means that, if Milan were a country, it would have the world's 28th largest economy, almost the size of that of the economy of Austria. The city, on the other hand, has a GDP of $115 billion, making it the world's 26th richest city by purchasing power.[1] Milan is the world's 11th most expensive city for expatriate employees,[2] and its influence in fashion, commerce, business, banking, design, trade and industry make it an Alpha world city,[3] as well as the world's 42nd most important in the Global Cities Index. Also, the city's hinterland is Italy's largest industrial area, and the FieraMilano fair is considered the largest in Europe. Milan, also, has one of Italy's highest GDP (per capita), about €35,137 (US$52,263), which is 161.6% of the EU average GDP per capita.[4]

Milan is also regarded as the true current fashion capital of the world, according to the 2009 Global Language Monitor, and annually competes with other major international centres, such as New York, Paris, Rome, London, Los Angeles and Tokyo.[5] Major fashion houses and labels, such as Versace, Gucci, Armani, Valentino, Prada, Dolce & Gabbana, Moschino and Missoni are headquartered in Milan, which greatly contribute to the city's economy.

Milan was, in the late 12th century, a wealthy and industrious city, as the production of armours and wool, led the Lombard town to become rich. During the Renaissance, along with Venice, Rome and Florence, in the making of luxury goods, textiles, hats and fabrics, and the city cultivated such as reputation that the English word "millinery", referring to women's hats in the 19th century, came from the word "Milan". Towards the late 19th and early 20th centuries, Milan became a major European industrial centre for the automotive industry, chemicals, textiles, tools, heavy machinery and book and music publishing, with companies such as Alfa Romeo opening up. After the city's World War II bombings and the opening of the Milan (camp) for refugees, the city witnessed an "economic miracle", with new buildings being built (such as the Pirelli Tower), more industries opening up and many immigrants from Southern Italy and China immigrating to the city. The city experienced a strong flow of immigrants, and became a major international and cosmopolitan centre for expatriate employees. A study showed that by the late-1990s, more than 10% of the city's workers were foreigners.[6] In January 2008, according to ISTAT statistics, it was estimated that 181,393 foreign-born immigrants lived in the city, representing 13.9% of the total population.[7]

Milan had a strong industrial and economic production after the war, however, it fell slightly in the late 1990s and early 2000s, especially with the tangentopoli political scandal. However, from 2004 onwards, economic growth started to increase again, with an average of 1%, below Lombardy (whose growth rate was 4.6%) and the Italy's 2004 6% average, and a significant reduced production in some industries: footwear (-11.4%), textiles (-6.1%) and clothing (-5%). The bulk of the plastic (-2%), chemicals (-1.8%) and mechanics (-1.6%) industries show a downward trend. Publishing production decreased by -2.6%, while the wood-processing industry production decreased by -1.2%. In contrast, despite an industrial decrease in production, Milan has had a rapid and strong growth in the tertiary and quaternary sectors, with logistics and transport (+6.8%) and food (+1.7%). Milan also has an important role in book production and publishing. It is the most important city in the nation for publishing.[8]

Banks and other services

Banks throughout Italy went through many changes in the late 1800s to early 1900s. One of the Milanese banks, the SBI, had many issues resolving its resources. It did not have support from foreign banks nor enough savings domestically. Other banks during this time in Italy, specifically during the 1907 international crisis, had high liquid assets and would have had to go bankrupt without the help from Banca d'Italia. A group of industrialists and bankers from Milan transformed the banking institute Figli di Weil Schott e C. into the Società Bancaria Milanese.[9]

Most traditional industries have relocated to other locations other than cities or have even closed down since the late 1970s in Italy. However, Milan, became Italy's most successful postindustrial city. Milan’s service sector has benefited from the efficiency of the city’s banks and the stock market, the Borsa Italiana located in Piazza degli Affari in the centre of the city. The majority of the services revolve around the Fashion industry, but the city is also a world centre of design at whole. There are specialties in the city in furniture design, graphic design, among other specialties. The design industry is centrally located to the Besana in the Brianza area north of the city. Communications is also a major service sector of the city. Milan is home to Mondadori, one of Italy’s largest publishing group. In addition, the newspapers Corriere della Sera and La Gazzetta dello Sport along with the newsmagazine L'espresso.[4]

Milan’s service sector has benefited from the efficiency of the city’s banks and the stock market, the Borsa Italiana, located in Piazza degli Affari in the centre of the city.[10]

Milan's main trading partners are Switzerland, Russia, Turkey and the European Union (especially Germany and France). In non-European trade, the main trading, exporting and importing partners are China, Hong Kong, the countries of North Africa, Singapore and United Arab Emirates. The city's main export products are electronics, electrical engineering, steel, textile and clothing products and motor vehicles (which, however, has dropped drastically in 2005 by 28.6%). On import side of things, the main partners in Milan South Korea, Thailand, India, China, Hong Kong, Taiwan and Japan. The imported goods from around 86% of these countries. Also, the city imports a significant amount from South American countries and the European Union (Germany, Belgium, Netherlands are the main partners).

Employment in Italy is linked to manufacturing as it has been seen that when there are technological changes in place, there is typically a positive effect on job growth; therefore, on employment rates. This was seen in the late twentieth century in the country as a whole.[11]

There is a steady workforce in the city of Milan due to the presence of new graduates from the five major universities located in the city. In the province, there are 1.6 million individuals employed, and about twenty five percent of that population are recorded as self-employed. The unemployment rate in Milan is recorded to be less than half of the national average, at about 4.6% in 2001.[12] 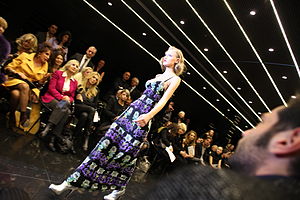 A photo of the runway from Milan Fashion Week 2013

In 2009, Milan is regarded as the world fashion capital, even beating New York, Paris, Rome and London.[5] Most of the major Italian fashion brands, including Valentino, Gucci, Versace, Prada and Dolce & Gabbana, are currently headquartered in the city. Milan also hosts a fashion week twice a year, just like other international centres such as Paris, London, Tokyo, New York, Los Angeles and Rome.[citation needed]

Italian Ready-to-Wear has grown tremendously in Milan, in addition to the Fashion industry on a general note. Many economists don’t pay a great deal attention to the fashion sector of the business in Milan. However, there is a great deal of quantitative weight being held by the fashion industry in terms of the economy of Milan, yet not much research has been conducted by historians or economists. The industrial center of Milan had been creating textiles and clothing for centuries, but it became an international superstar of fashion in 1970, and a leading international fashion hub or center.[15] 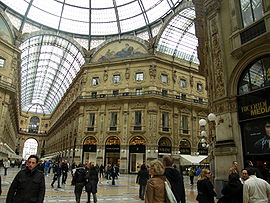 The Galleria Vittorio Emanuele II is one of Milan's most popular tourist attractions.
Main article: Tourism in Milan

According to a study, most of the visitors who come from the USA to the city go on business matters, whilst Chinese and Japanese tourists mainly take up the leisure segment.[19] The city boasts several popular tourist attractions, such as the city's Duomo and Piazza, the Teatro alla Scala, the San Siro Stadium, the Galleria Vittorio Emanuele II, the Castello Sforzesco, the Pinacoteca di Brera and the Via Montenapoleone. Most tourists visit sights[20] such as Milan Cathedral, the Castello Sforzesco and the Teatro alla Scala, however, other main sights such as the Basilica di Sant'Ambrogio, the Navigli and the Brera district are less visited and prove to be less popular.[19]

The city also has numerous hotels, including the ultra-luxurious Town House Galleria, which is the world's first seven-star hotel according to Société Générale de Surveillance (five-star superior luxury according to state law, however) and one of The Leading Hotels of the World.[21] The average stay for a tourist in the city is of 3.43 nights, whilst foreigners stay for longer periods of time, 77% of which stay for a 2-5 night average.[19]

In addition to Milan being regarded as one of the major Fashion capitals of the world, being home to many services, banks, and industries, the city has also become important to the world of environmental matters and energy issues. It is home to about 350 companies that are active in areas of interest such as, water, energy efficiency, air, external noises, energy from renewable sources and hydrogen. In addition, the metropolitan city holds some of these companies that have components of research and development (about 30% of the companies) and is one of the most active areas in terms of patents for energy efficiency [13]

In fact, in July 2014, the city of Milan hosted the first meeting of the European Employment and Environmental Ministers. Milan, looking to create new jobs for the nation with a rising unemployment rate, and have many of these jobs be in the environmental sector, such as those employment areas being linked to renewable energy, energy efficiency, development of green infrastructure, as well as waste reduction.[22]