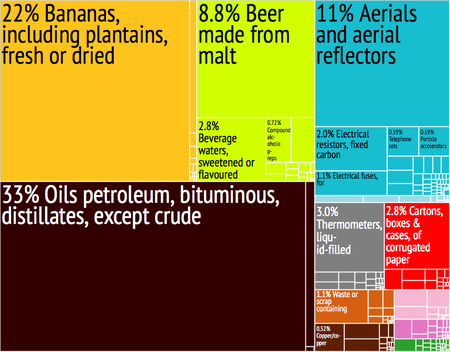 Saint Lucia is one of the Windward Islands, a group of islands located off the southeast coast of North America. Due to its small size and relative lack of geological resources, its 2000s economy relies primarily on the sale of banana crops, and the income generated from tourism, with additional input from small-scale manufacturing.

The island's banana output was heavily impacted in 2007 by the passage of Hurricane Dean.[1] In 2006 the Governor stated:

While living standards have improved for many, a large number of persons has been pushed to the margin of economic activity especially in the areas which once depended heavily on the banana industry for a livelihood.[2]

In addition to banana production for export, a variety of crops are produced on the island for domestic consumption.

In order to broaden the island's economic base, the government added small computer-driven information technology and financial services as development objectives.

St. Lucia's leading revenue producers—agriculture, tourism, and small-scale manufacturing—benefited from a focus on infrastructure improvements in roads, communications, water supply, sewerage, and port facilities. Foreign investors also have been attracted by the infrastructure improvements as well as by the educated and skilled work force and relatively stable political conditions. The largest investment is in a petroleum storage and transshipment terminal built by Hess Oil. The Caribbean Development Bank (CDB) funded an airport expansion project.

Until the events of 11 September 2001, the tourism sector had made significant gains, experiencing a boom despite some untimely and destructive hurricanes. Stay-over visitors and cruise arrivals declined in 2001 and several hotels declared bankruptcy, including the Hyatt. The development of the tourism sector remains a priority, and the government is committed to providing a favourable investment environment. Incentives are available for building and upgrading tourism facilities. There has been liberal use of public funds to improve the physical infrastructure of the island, and the government has made efforts to attract cultural and sporting events and develop historical sites.

St. Lucia's economy depends primarily on revenue from tourism and banana production, with some contribution from small-scale manufacturing. All sectors of the economy have benefited from infrastructure improvements in roads, communications, water supply, sewerage, and port facilities. These improvements, combined with a stable political environment and educated work force, have attracted foreign investors in several different sectors. Although St. Lucia enjoys a steady flow of investment in tourism, the single most significant foreign investment is Hess Oil's large petroleum storage and transshipment terminal. In addition, the Caribbean Development Bank funded an extensive airport expansion project.

Although banana revenues have helped fund the country's development since the 1960s, the industry is now in a terminal decline, due to competition from lower-cost Latin American banana producers and reduced European Union trade preferences. The country is encouraging farmers to plant crops such as cocoa, mangoes, and avocados to diversify its agricultural production and provide jobs for displaced banana workers.

Tourism recovered in 2004, following the post-11 September 2001 recession, and continued to grow in 2005, making up more than 48% of St. Lucia's GDP. The hotel and restaurant industry grew by 6.3% during 2005. Stay-over arrivals increased by 6.5%, and the United States remained the most important market, accounting for 35.4% of these arrivals. Yacht passengers rose by 21.9%. Redeployment of cruise ships, remedial berth construction, and high fuel costs prevented higher growth rates. However, several investors have planned new tourism projects for the island, including a large hotel and resort in the southern part of the island. The global recession has caused a reduction in tourist revenue and foreign investment, significantly slowing growth rates.

St. Lucia is a beneficiary of the U.S. Caribbean Basin Initiative and is a member of the Caribbean Community and Common Market (CARICOM). The country hosts the executive secretariat of the Organization of Eastern Caribbean States (OECS).

St. Lucia is a member of the Eastern Caribbean Currency Union (ECCU). The Eastern Caribbean Central Bank (ECCB) issues a common currency (the East Caribbean dollar) for all members of the ECCU. The ECCB also manages monetary policy and regulates and supervises commercial banking activities in its member countries.

St. Lucia is a beneficiary of the U.S. Caribbean Basin Initiative and is a member of the Caribbean Community and Common Market (CARICOM) and the Organization of Eastern Caribbean States (OECS).

St. Lucia is the headquarters of the Eastern Caribbean Telecommunications (ESTEL) authority, which is developing the regulations to liberalize the telecommunications sector in the region by 2004.