He was elected Conservative Member of Parliament for the constituency of Wantage at the 2005 general election, and was re-elected in the 2010 general election being again returned to House of Commons in 2015.

A qualified barrister, Vaizey is also a regular media columnist and political commentator.[3] 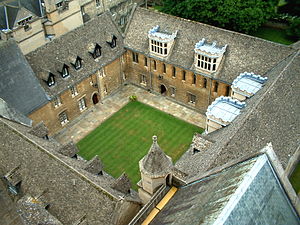 Vaizey is the son of the late Lord Vaizey, a Labour Life Peer, and Marina Vaizey (The Lady Vaizey CBE), the well-known art historian. His family hails from Essex[4] and, as the son of a peer, he can be styled "The Honourable Edward Vaizey".

Vaizey spent part of his childhood growing up in Berkshire. He was educated at St Paul's School before reading History at Merton College, Oxford. Elected Librarian (Vice-President) of the Oxford Union, he graduated with a 2.1 degree. After leaving Oxford, he worked for the Conservative parliamentarians Kenneth Clarke and Michael Howard as an adviser on employment and education issues.

Vaizey practised as a barrister for several years, specialising in family law and child care.[5]

Vaizey first stood for Parliament at the 1997 general election, when he was the candidate for Bristol East. In the 2001 UK general election, he acted as an election aide to Iain Duncan Smith. He stood at the 2002 local elections for the safe Labour ward of Harrow Road in the City of Westminster.

Vaizey was one of Michael Howard's inner circle of advisers and a member of a group of Young Conservatives somewhat disparagingly referred to as the "Notting Hill Set" along with David Cameron — elected party leader in December 2005 — George Osborne, Michael Gove, Nicholas Boles and Rachel Whetstone. Like Gove and Boles, he is a Fellow of the Henry Jackson Society, and is also a Vice-Chairman of Conservative Friends of Poland.[6] Conservative commentator Peter Oborne describes him as Cameron's "unofficial ambassador to the Murdoch press".[7]

In 2002, Vaizey was selected by Wantage Conservative Association to be its candidate for the 2005 general election to succeed the sitting MP, Robert Jackson, who subsequently crossed the floor to Labour. Vaizey won a two-thirds majority in the final ballot of members and was elected as Member of Parliament in that election, receiving 22,394 votes. His majority was 8,017 over the Liberal Democrats, this represented 43% of the voters and a 1.9% swing from the Liberal Democrats to the Conservatives.

When first elected to the House of Commons, Vaizey became a member of the Standing Committee on the Consumer Credit Bill. Before being appointed to the Opposition frontbench he was a member of the Modernisation and Environmental Audit Select Committees and was Deputy Chairman of the Conservative's Globalisation and Global Poverty Policy Group.

In November 2006, Vaizey was appointed to the Conservative frontbench as a Shadow Minister for Culture, overseeing Arts and Broadcasting policy.

In the 2010 general election he received a vote of 29,284, which was 52% of the votes cast, winning an increased majority. While the Conservative Party was in negotiations with the Lib Dems in the days after 6 May 2010, Vaizey was appearing regularly on television putting forward the Conservative viewpoint. 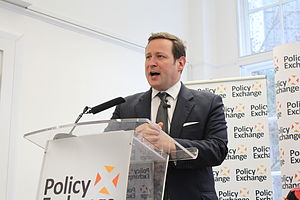 On 18 May 2009 the Daily Telegraph reported that receipts submitted by Vaizey show that he ordered a £467 sofa, a £544 chair, a £280.50 low table and a £671 table in February 2007 from Oka, a furniture shop run by Annabel Astor. The Commons Fees Office initially rejected the claim as the receipt said that the furniture was due to be delivered to Vaizey's home address in West London, but was later paid when Vaizey advised the Fees Office that the furniture was intended for his second home at his Wantage constituency. Vaizey told the Daily Telegraph that we (he and his wife) "had it delivered to London because we would be in to collect it and we were driving down with it".[8]

When these claims became public, Vaizey said that he had repaid the cost of the Oka furniture and the antique chair which he had bought with taxpayers' money: "I accept that the £300 armchair was an antique item and therefore that claim should not have been made. I also accept that the Oka items could be deemed as being of higher quality than necessary. I have paid back both these claims. I have not claimed for any other furniture bought for my constituency home at any time before or since."[8] Vaizey has described himself as "relatively affluent".[9]

Vaizey has been a regular commentator for the Conservative Party in the broadcast and news media. He has written regular comment pieces for The Guardian since 1998, and contributes articles to The Sunday Times News Review. He has also written for The Times and The Daily Telegraph as well as editorials for the London Evening Standard. Vaizey is also a regular broadcaster, appearing on Fi Glover's and Edwina Currie's shows on BBC Radio 5 Live, as a regular panellist on five’s The Wright Stuff with Matthew Wright, BBC Radio 4's Despatch Box and Westminster Hour, and occasionally presents People and Politics on the BBC World Service.