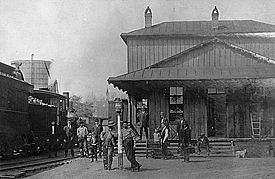 Eden is a city in Rockingham County, North Carolina, United States. The population was 15,527 at the 2010 census. The city was incorporated in 1967 through the consolidation of three separate towns: Leaksville, Spray, and Draper.

Several small historic downtown areas have opened up, such as the "Olde Leaksville" shopping district, in an effort to bring tourists to the city.

Eden is located at Lua error in Module:Coordinates at line 668: callParserFunction: function "#coordinates" was not found. (36.506434, -79.745092).[3] The Smith and the Dan River have their confluence on the south side of Eden. The Dan River flows along Eden's southern border while the Smith River flows from the north bisecting the city on its route to meet the Dan River.

Eden was a 70,000-acre (280 km2) estate owned by William Byrd II, a planter of Virginia and North Carolina. The estate was originally called "The Land of Eden".

During the last years of his life, William Byrd II dreamed of bringing large numbers of Swiss Protestants to the "Land of Eden", which eventually included over 100,000 acres (400 km2) in Virginia. He envisioned an industrious, self-sufficient colony that would thrive on the abundance of the frontier. Byrd's dream was not to be realized. After years of negotiations, at least one boatload of Swiss did sail for "The Land of Eden" from Europe, but it was shipwrecked in a December gale off the coast of Virginia, and none of the few survivors are believed to have reached Eden. Byrd died August 26, 1744, as the "Land of Eden" began to be surrounded by the settlement of Scotch-Irish, whom Byrd had compared to the "Goths and Vandals."[citation needed]

"Eden" descended to William Byrd III, who shared none of his father's dreams of colonization. Young Byrd married Elizabeth Hill Carter in 1748. He sought to dispose of Eden to gain cash to support his grand lifestyle. He was finally successful on November 8, 1755, when he sold 26,000 acres (110 km2) in North Carolina to two merchant brothers from the island of Antigua, Simon and Francis Farley. By this time, settlement was increasing at a considerable pace. The Farley brothers attempted to create plantations on some of the richest acres, but more frequently, settlers squatted on the land and built homesteads. In 1762 James Parke Farley, son of Francis Farley, went to Williamsburg to attend the College of William and Mary and soon married Elizabeth Hill Byrd, daughter of William Byrd III and Elizabeth Hill Carter.

Many later settlers migrating to the Dan River Area knew little of William Byrd. They were familiar with an old Indian village in the area near Town Creek and the Farley holdings. This location became the center of settlement, and the 26,000 acres (110 km2) came to be called the Sauratown tract. In 1775, James Parke Farley and his new bride moved from cosmopolitan Williamsburg, Virginia, to the Sauratown. Farley claimed that Sauratown was his, created new plantations, and attempted to drive off the squatters. He built a home overlooking the Dan River. Farley was also a member of the 3rd Provincial Congress that met at Hillsboro. In 1776, the family left the Sauratown, partly as a result of Elizabeth Farley's father's suicide and perhaps also of her dislike of frontier life. James Parke Farley was killed during the Revolutionary War, leaving his wife and four daughters to fend for themselves, and Sauratown was unmanaged. Farley's widow married Reverend John Dunbar, who attempted to manage Sauratown but failed. Finally, the Governor became involved in settling the legal interests of the Farley heirs. The 26,000 acres (110 km2), became a magnet for settlement due to its proximity to the Petersburg-Salem road that crossed the Smith River at an island ford. In 1795, the town of Leaksville was established on the southwest edge of the Sauratown along the main road. Joseph Cloud resurveyed the tract and divided it into two equal shares in 1798. A year later, Farley's daughters, Maria Farley and Rebecca Parke Farley, sold their shares to Patrick Henry of Virginia, the man who delivered the "Give me Liberty, or give me Death!" speech. Henry, on his deathbed June 6, 1799, gave the land to two of his sons, Alexander Spottswood Henry and Nathaniel West Henry. In the century that Sauratown was in existence many still prominent families settled in the "Land of Eden", including the Brodnax, Dillard, Ruffin, Morehead, Henry, and Winston families. Many Scots also settled in the area, including the Galloway, Scales, Watt, Lenox, Campbell, and Moir families. Other residents of the county have included General Lighthorse Harry Lee.[citation needed] On the third weekend of September; Eden hosts The River Fest each year to celebrate Eden's history.

Miller Brewing Company announced it will be shutting down the brewery by September 2016.[6]

There were 6,644 households out of which 28.0% had children under the age of 18 living with them, 45.0% were married couples living together, 16.5% had a female householder with no husband present, and 34.2% were non-families. 31.0% of all households were made up of individuals and 14.1% had someone living alone who was 65 years of age or older. The average household size was 2.34 and the average family size was 2.90.

Eden boasts an average of 8 churches per square mile.[citation needed]

Eden has in total: Four Elementary Schools, One Middle School, and One High School.