From Infogalactic: the planetary knowledge core
(Redirected from Edessa, Mesopotamia)
Jump to: navigation, search
This article is about the city in Mesopotamia. For the Greek city, see Edessa, Greece. For other uses, see Edessa (disambiguation). 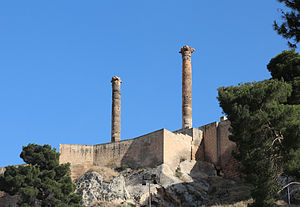 The heritage of Roman Edessa survives today in these columns at the site of Urfa Castle, dominating the skyline of the modern city of Şanlıurfa.

The earliest name of the city was Adma (Aramaic: אדמא‎ also written Adme, Admi, Admum) which first appeared in Assyrian cuneiform sources in the 7th century BC.[1] A Hellenistic settlement was founded on the location of the Syrian town by Seleucus I Nicator in 304 B.C. The new settlement was named "Edessa" after the ancient capital of Macedonia, perhaps due to its abundant water, just like its Macedonian eponym.[2] The native Syriac name of the city, "Orhay" (Syriac: ܐܘܪܗܝ‎), appears to correspond with the toponym Antiochia Kallirhoe "Antioch by the Kallirhoe" (Ἀντιόχεια ἡ ἐπὶ Καλλιρρόης), which is found on Edessan coins struck by Antiochus IV Epiphanes (175–164 BC).[3] The same name appears also in Armenian as Ուռհա, transliterated Urha or Ourha, in Arabic it is الرُّهَا transliterated as Er Ruha or Ar-Ruha, commonly Urfa, and Riha in Kurdish, to the Frankish Crusaders Rohais, and in Turkish Urfa, Ourfa, Sanli Urfa, or Şanlıurfa ("Glorious Urfa"), its present name. During Byzantine rule it was named Justinopolis.

File:N-Mesopotamia and Syria.svg In the second half of the 2nd century BC, as the Seleucid monarchy disintegrated in the wars with Parthia (145–129), Edessa became the capital of the Abgar dynasty, who founded the Kingdom of Osroene (also known in history as Kingdom of Edessa). This kingdom was established by Nabataean or Arab tribes from North Arabia, and lasted nearly four centuries (c. 132 BC to 214), under twenty-eight rulers, who sometimes called themselves "king" on their coinage. Edessa was at first more or less under the protectorate of the Parthians, then of Tigranes of Armenia, Edessa was Armenian Mesopotamia's capital city, then from the time of Pompey under the Romans. Following its capture and sack by Trajan, the Romans even occupied Edessa from 116 to 118, although its sympathies towards the Parthians led to Lucius Verus pillaging the city later in the 2nd century. From 212 to 214 the kingdom was a Roman province. The emperor Caracalla was assassinated on the road from Edessa to Carrhae by one of his guards in 217. Edessa became one of the frontier cities of the province of Osroene and lay close to the border of Sassanid Persia. The Battle of Edessa took place between the armies of the Roman Empire under the command of Emperor Valerianus and Sassanid forces under Shahanshah Shapur I in 260. The Roman army was defeated and captured in its entirety by the Persian forces, including Valerian himself, an event which had never previously happened.

The literary language of the tribes that had founded this kingdom was Aramaic, from which Syriac developed. Traces of Hellenistic culture were soon overwhelmed in Edessa, which employed Syriac legends on coinage, with the exception of the Syriac client king Abgar IX (179–214), and there is a corresponding lack of Greek public inscriptions.[4]

Rebuilt by Emperor Justin, and called after him Justinopolis,[5] Edessa was taken in 609 by Sassanid Persia, and soon retaken by Heraclius, but lost to the Muslim army under the Rashidun Caliphate during the Islamic conquest of Levant in 638 A.D. The Byzantines often tried to retake Edessa, especially under Romanus Lacapenus, who obtained from the inhabitants the "Holy Mandylion", an ancient portrait of Christ, and solemnly transferred it to Constantinople, August 16, 944. This was the final great achievement of Romanus's reign. This venerable and famous image, which was certainly at Edessa in 544, and of which there is an ancient copy in the Vatican Library, was brought to the West by the Venetians in 1207 following the Fourth Crusade. The city was ruled shortly thereafter by Marwanids.

In 1031 Edessa was given up to the Byzantines under George Maniakes by its Arab governor. It was retaken by the Arabs, and then successively held by the Greeks, the Armenians, the Seljuk Turks (1087), the Crusaders (1099), who established there the County of Edessa and kept the city until 1144, when it was again captured by the Turk Zengi, and most of its inhabitants were allegedly slaughtered together with the Latin archbishop (see Siege of Edessa). These events are known to us chiefly through the Armenian historian Matthew, who had been born at Edessa. In 1144 the city had an Armenian population of 47,000. Since the 12th century, the city has successively been ruled by the Sultans of Aleppo (Ayyubids), Sultanate of Rum, the Mongols, the Mameluks, the Akkoyunlu, the Safavids, and from 1517 to 1918 by the Ottoman Empire.[6] In 1890, the population of Edessa consisted of 55,000, of which the Muslim population made up 40,835.[6] 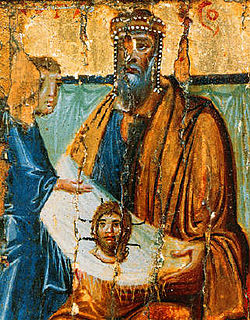 The precise date of the introduction of Christianity into Edessa is not known. However, there is no doubt that even before AD 190 Christianity had spread vigorously within Edessa and its surroundings and that shortly after the royal house joined the church.[7] According to a legend first reported by Eusebius in the 4th century, Syriac King Abgar V Ukāmā was converted by Addai,[8] who was one of the seventy-two disciples, sent to him by "Judas, who is also called Thomas".[citation needed]. Yet various sources confirm that the Abgar who embraced the Christian faith was Abgar IX.[9][10][11] Under him Christianity became the official religion of the kingdom.[12] As for Addai, he was neither one of the seventy-two disciples as the legend asserts, nor was sent by Apostle Thomas, as Eusebius says.[13] He was succeeded by Aggai, then by Palout (Palut) who was ordained about 200 by Serapion of Antioch. Thence came to us in the 2nd century the famous Peshitta, or Syriac translation of the Old Testament; also Tatian's Diatessaron, which was compiled about 172 and in common use until St. Rabbula, Bishop of Edessa (412–435), forbade its use. Among the illustrious disciples of the School of Edessa Bardesanes (154–222), a schoolfellow of Abgar IX, deserves special mention for his role in creating Christian religious poetry, and whose teaching was continued by his son Harmonius and his disciples.

A Christian council was held at Edessa as early as 197.[14] In 201 the city was devastated by a great flood, and the Christian church was destroyed.[15] In 232 the relics of the apostle Thomas were brought from Mylapore, India, on which occasion his Syriac Acts were written. Under Roman domination many martyrs suffered at Edessa: Sts. Scharbîl and Barsamya, under Decius; Sts. Gûrja, Schâmôna, Habib, and others under Diocletian. In the meanwhile Christian priests from Edessa had evangelized Eastern Mesopotamia and Persia, and established the first Churches in the kingdom of the Sassanids. Atillâtiâ, Bishop of Edessa, assisted at the First Council of Nicaea (325). The Peregrinatio Silviae (or Etheriae)[16] gives an account of the many sanctuaries at Edessa about 388.

When Nisibis was ceded to the Persians in 363, Ephrem the Syrian left his native town for Edessa, where he founded the celebrated School of the Persians. This school, largely attended by the Christian youth of Persia, and closely watched by Rabbula, the friend of Cyril of Alexandria, on account of its Nestorian tendencies, reached its highest development under Bishop Ibas, famous through the controversy of the Three Chapters, was temporarily closed in 457, and finally in 489, by command of Emperor Zeno and Bishop Cyrus, when the teachers and students of the School of Edessa repaired to Nisibis and became the founders and chief writers of the Nestorian Church in Persia.[17] Miaphysitism prospered at Edessa, even after the Arab conquest.

Under Byzantine rule, as metropolis of Osroene, it had eleven suffragan sees.[18] Lequien[19] mentions thirty-five Bishops of Edessa; yet his list is incomplete. The Eastern Orthodox episcopate seems to have disappeared after the 11th century. Of its Jacobite bishops twenty-nine are mentioned by Lequien (II, 1429 sqq.), many others in the Revue de l'Orient chrétien (VI, 195), some in Zeitschrift der deutschen morgenländischen Gesellschaft (1899), 261 sqq. Moreover, Nestorian bishops are said to have resided at Edessa as early as the 6th century.

The Armenian chronicler Sebeos, Bishop of the Bagratunis (writing in the 660s AD), gives the earliest narrative accounts of Islam in any language today.[citation needed] Sebeos writes of a Jewish delegation going to an Arab city (possibly Medina) after the Byzantines conquered Eddesa:

Twelve peoples [representing] all the tribes of the Jews assembled at the city of Edessa. When they saw that the Iranian troops had departed ... Thus Heraclius, emperor of the Byzantines, gave the order to besiege it. ... So they departed, taking the road through the desert to Tachkastan to the sons of Ishmael. [The Jews] called [the Arabs] to their aid and familiarized them with the relationship they had through the books of the [Old] Testament. Although [the Arabs] were convinced of their close relationship, they were unable to get a consensus from their multitude, for they were divided from each other by religion. In that period a certain one of them, a man of the sons of Ishmael named Mahmet, a merchant, became prominent. A sermon about the Way of Truth, supposedly at God's command, was revealed to them... he ordered them all to assemble together and to unite in faith... He said: "God promised that country to Abraham and to his son after him, for eternity. And what had been promised was fulfilled during that time when [God] loved Israel. Now, however, you are the sons of Abraham, and God shall fulfill the promise made to Abraham and his son on you. Only love the God of Abraham, and go and take the country which God gave to your father, Abraham. No one can successfully resist you in war, since God is with you."

Islamic tradition tells of a similar account, known as the Second pledge at al-Aqabah. Sebeos' account suggests that Muhammad was actually leading a joint venture toward Palestine, instead of a Jewish-Arab alliance against the Meccan pagans toward the south.

Following are some of the famous individuals connected with Edessa: