The Edgar Thomson Steel Works is a steel mill in the Pittsburgh area community of North Braddock, Pennsylvania, United States. It has been active since 1872. It is currently owned by U.S. Steel and is known as Mon Valley Works – Edgar Thomson Plant on its official website. 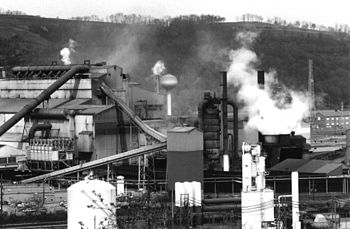 Ovens and mill building of the Edgar Thomson works, as of the mid-1990s

The mill occupies the historic site of Braddock's Field, on the banks of the Monongahela River east of Pittsburgh. On July 9, 1755, in the Battle of the Monongahela, French and Indian forces from Fort Duquesne defeated the expedition of British General Edward Braddock, who himself was mortally wounded.

Braddock's Field also was the site of a rally of rebellious militiamen and farmers during the Whiskey Rebellion, prior to a massive march on the town of Pittsburgh on August 1, 1794.[1]

The site is on the banks of the Monongahela, which provides cost-effective, riverine transportation of coke, iron and finished steel products.

The Edgar Thomson Steel Works was designed and built because of the Bessemer process, the first inexpensive industrial process for the mass production of steel. In the process, air blowing through the molten iron removed impurities via oxidation. This took place in the Bessemer converter, a large ovoid steel container lined with clay or dolomite.

In the summer of 1872, while in Europe, Andrew Carnegie learned about the Bessemer process. He returned to Pittsburgh with plans to build his own Bessemer plant. Some of the partners, stockholders, and connected people were William Coleman, Andrew Kloman, Henry Phipps, David McCandless, Wm. P. Shinn, John Scott, David A. Stewart, James Robb Wilson and Thomas Carnegie. The firm was known as Carnegie, McCandless, and Company.[2] The plant was named after J. Edgar Thomson, who was the president of the Pennsylvania Railroad.

On January 1, 1873, ground work began on the Edgar Thomson Steel Works in Braddock Twp. It has been estimated that the plant was built for about $1.2 million. The mill was built by Alexander Lyman Holley, who found a manager to run the mill, Capt. William Jones, a Civil War veteran. On August 22, 1875, the Edgar Thomson Steel Works' hulking Bessemer converter produced its first heat of liquid steel, destined to become 2,000 steel rails for the Pennsylvania Railroad. Within one year of beginning production the mill was able to create 32,228 tons of steel rail.[3] The district was known as Bessemer, later incorporated as North Braddock. The plant's first general superintendent, William R. Jones, described the steel mill writing, "This is the most powerful rail mill in the country; amongst its notable productions are a 62 lb. rail 120 feet long, rolled in five minutes from the time of drawing the bloom from the furnace and 600 rails 56 lb. per yard rolled in 11 1/2 hours."[4] With continual improvements in production the mill was capable of producing 225 tons of steel rails per day.[5]

In 1892, the workers of the plant took part in one of the most serious strikes in U.S. history. The Homestead Strike arose when Henry Clay Frick, an associate and partner of Carnegie, took over while Carnegie traveled to Scotland. Frick attempted to cut the wages of the steel workers.[6] The steelworkers at the Duquesne and Edgar Thomson Works joined the strike and shut their mills down in sympathy.[7] Frick took extreme measures. He brought in thousands of strikebreakers. When he sent in 300 Pinkerton guards to protect the strikebreakers, a riot broke out, resulting in 10 deaths and thousands of injuries. To prevent any further bloodshed, the governor, Robert Pattison, sent two brigades to stop the fighting. Carnegie, McCandless and Company recommenced operations with non-union immigrant workers.[8]

In 1901, Carnegie sold the Carnegie Steel Company, including the Edgar Thomson Works, to J. P. Morgan, Elbert H. Gary and other investors, as part of the foundation of U.S. Steel.

In October, 1984 a Merrill Lynch analyst infamously predicted that U.S. Steel would close Thomson within a few years.[9] The plant survived the collapse of the steel industry in the 1980s, which shuttered famous plants, like the Homestead Steel Works in Homestead, or the National Tube Works in Mckeesport, and became the last integrated mill in the valley, an area which once contained 90,000 people employed in the basic steel industry. [10]

Today, two blast furnaces (Furnaces No. 1 and No. 3) continue in operation at the Edgar Thomson Steel Works, which remains part of U.S. Steel. In 2005, the mill produced 2.8 million tons of steel, equal to 28% of U.S. Steel’s domestic production. The mill employs about 900 persons, some of whom belong to the second or third generations of their families to work in the mill.[11]

Among improvements to its physical plant is a $250 million continuous caster, which converts liquid steel directly into slabs, installed in 1992.

In April 1995, the mill was designated a historic landmark by ASM International, a society that honors works of structural engineering. Other structures honored by the society are the Statue of Liberty and the Eiffel Tower.