Edgbaston Cricket Ground, also known as the County Ground or Edgbaston Stadium, is a cricket ground in the Edgbaston area of Birmingham, England. It is home to Warwickshire County Cricket Club, and is also used for Test matches, One Day Internationals and Twenty20 Internationals.

With permanent seating for 25,000 spectators, Edgbaston is the second-largest cricketing venue in the United Kingdom, after Lord's Cricket Ground in London.[1]

The land that now makes up Edgbaston Cricket Ground was originally owned by the Calthorpe Estate, who have now sold the site onto Wylam Investments (Edgbaston Holdings) on a long lease. Calthorpe Estates had developed the manor of Edgbaston into an exclusive Birmingham suburb over the course of the 19th century, and believed that a cricket ground would be an asset that would add to the genteel image of the area.[2] Warwickshire County Cricket Club had considered Rugby and Leamington Spa for their headquarters, but club secretary William Ansell believed that Birmingham's large population and comprehensive railway connections made it preferable – envisaging first-class status for the county and Test status for the ground.[2] 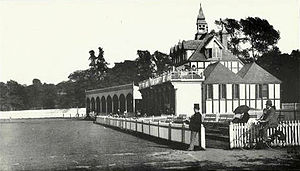 The Pavilion and East Stand in 1895

The club had initially favoured the Wycliffe Ground on Pershore Road, but were instead offered a 12-acre "meadow of rough grazing land" in an undeveloped area on the banks of the River Rea by the Calthorpe Estate – the less attractive development land having more to gain from association with the cricket ground.[3] With the site only 20 minutes' walk from New Street Station, Warwickshire agreed in 1885 to lease the land for £5 per acre over a 21-year period.[4] A further £1,250 was spent on draining and enclosing the site and building a wooden pavilion.[5] The new ground's first match took place on 7 June 1886 against the MCC, watched by 3,000 spectators over two days, with 6,000 turning out on 9 and 10 August to watch Warwickshire play Australia.[6]

Edgbaston's first test match was the first in The Ashes series against Australia in 1902,[7] for which the club erected a permanent stand, two temporary stands and facilities for 90 members of the press.[5] These developments cost a total of £1,500, however, and Warwickshire's share of the tour funds was only £750.[8] 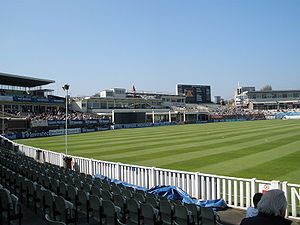 The first piece of development in the post-war era was the construction of the Rea Bank and the Thwaite Memorial Scoreboard in 1950.[5] In 1956 an Indoor Cricket School was built[9] and the Pavilion Suite was completed in the same year.[5] By the time the William Ansell Stand opened in 1967 the facilities at Edgbaston were considered to rival those at Lord's.[5]

In 1989 executive boxes were added to the rear of the Priory and Raglan Stands and the Sidney Barnes Stand was reconstructed and enlarged, expanding the ground capacity of 17,500.[10]

In July 1997, Edgbaston was the scene of the first competitive floodlit day-night cricket match in Britain.[11]

The pavilion end on the south side of the ground was completely redeveloped between 2010 and 2011 at a cost of £32 million, partly paid for from a £20 million loan from Birmingham City Council, bringing the ground's capacity up to 25,000.[12] Demolition of the pavilion – parts of which dated back to the 1890s – and the Leslie Deakins, R. V. Ryder and William Ansell Stands took place in January 2010, with construction of the new South and West Stands starting in April 2010 and reaching completion 66 weeks later.[13] 5 permanent floodlight pylons were erected around the ground at the same time, allowing up to 15 days of day-night cricket annually.[13] The new development was officially opened by the Duke of Edinburgh on 25 July 2011.[14] The first test match to be played at the redeveloped venue was the third Test vs India on 10 August 2011, which saw England reach the number 1 position in the ICC Test Championship for the first time with victory by an innings and 242 runs on the fourth day of the match.[15] 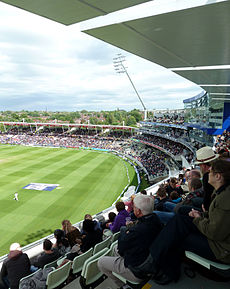 The Eric Hollies and South Stands and the Press Box.

Edgbaston is considered to be one of England's leading cricket grounds. Wisden's guide to cricket grounds in 1992 commented that "Lord's is really its only superior in the United Kingdom"[10] with The Daily Telegraph agreeing in 2009 that "taken all in all, it is now the best ground outside Lord's."[16] After the opening of the new South and West Stands in 2011 the England and Wales Cricket Board commented that "the spacious facilities are cutting edge, marginally better than the Home of Cricket".[1]

The atmosphere at Edgbaston is reputed to be the most hostile in England for visiting teams.[17] Former England captain Alec Stewart recalled "On a world level I would put it up there with Eden Gardens in Calcutta, which holds about 100,000. It inspires a team. It's like having another man in your side."[17] and the former England wicketkeeper Geraint Jones describes how "The crowd here makes such a big noise when you are doing well ... it's a unique environment."[17] After winning the 2015 Ashes Test Match with Australia at Edgbaston, England captain Alastair Cook commented "The Edgbaston crowd was up there with the loudest I can remember. With some of the chants, even guys who have played a fair bit of cricket were looking at each other and realising how special it was. Edgbaston has been a fantastic venue for us."[18]

The record attendance at a County Championship match at Edgbaston is 28,000 against Lancashire in the championship-winning season of 1951, and the record for a single day of a test match is 32,000 against the West Indies in 1957.[10]

For some years until 2000, Edgbaston had a distinctive motorized rain cover system, known as the Brumbrella. 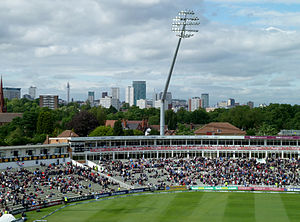 The Raglan and R. E. S. Wyatt Stands, with Birmingham City Centre in the distance.