From Infogalactic: the planetary knowledge core
Jump to: navigation, search
For other uses, see Edgware (disambiguation).

Edgware (/ˈɛdʒwɛər/) is a district of north west London, mainly in the London Borough of Barnet, with its western edge in the London Borough of Harrow. Edgware is centred 10 miles (16 km) north-northwest of Charing Cross and has its own commercial centre. Edgware has a generally suburban character, typical of the rural-urban fringe. The community benefits from some elevated woodland on a high ridge marking the Hertfordshire border of gravel and sand. Edgware is identified in the London Plan as one of the capital's 35 major centres. In 2011, Edgware had a population of 76,056. Edgware is principally a shopping and residential area and one of the northern termini of the Northern line. It has a bus garage, a shopping centre called the Broadwalk, a library, a hospital—Edgware Community Hospital, and two streams—Edgware Brook and Deans Brook, both tributaries of a small brook known as Silk Stream, which in turn merges with the River Brent at Brent Reservoir.

Edgware succeeds to the identity of the ancient parish in the county of Middlesex. Edgware is a Saxon name meaning Ecgi's weir. Ecgi was a Saxon and the weir relates to a pond where Ecgi's people caught fish. Edgware parish formed part of Hendon Rural District from 1894.[1] It was abolished in 1931 and formed part of the Municipal Borough of Hendon until 1965.[2] The Romans made pottery at Brockley Hill, thought by some to be the site of Sulloniacis. Canons Park, to the north-west, was developed as an estate by James Brydges, 1st Duke of Chandos and was the site of his great palace Cannons.

Edgware was identified in 2008 as a major centre for preferred development in the London Plan.[3]

Until the 20th century there were no major rises in the population of Edgware. In the manor of Edgware in 1277 there were eight free tenants (excluding the Grand Priory of Clerkenwell) and 52 customary tenants (assumed to all be men); the survey from which these figures are taken, however, includes lands appurtenant to the manor lying in Kingsbury. In 1425–26 the manor of Edgware had three free and 29 customary tenants in the parish, and in 1525–26 the numbers were two or three free and 26 customary tenants. In 1547 there were 120 (adult or teenage) communicants in the parish. In 1597 there were between 60 and 70 houses in the parish, and 44 more in the village of Edgware but on the west side of Watling Street and therefore in the parish of Little Stanmore. In 1599 there were six free and 25 customary tenants of the manor within Edgware. In 1642 in the Civil War the protestation oath of 1641 was taken by 103 adult males. In 1664 there were 73 houses in the parish, but the hearth tax of 1672 gives only 66. During the 18th century the average numbers both of baptisms and burials declined gently but steadily; in the period 1717–26 the average number of baptisms was between 15 and 16 a year and the average number of burials 20, but by 1801–10 the figures were 11 and 9, respectively. There were said to be 69 houses in the village in 1766 and 76 houses in 1792. At the first census in 1801 the population was 412. Throughout the 19th century numbers rose slowly, except for the years between 1851 and 1871; the censuses of 1861 and 1871 show successive declines of 7 percent, attributed in 1871 to migration and to the absence of direct trains to London.[4]

Ten years later the losses had been more than made good, and in 1901 the figure of 868 had been reached. By 1921 the population had grown to 1,516, but the great infilling of the southern part of Edgware after 1924 caused the most spectacular increase. In 1931 the population was 5,352; this had increased to 17,513 by 1951 and to 20,127 by 1961.[4] As well as Christian and subsequent settling of other religious groups, Edgware's development coincided with that of its Jewish community,[5] currently forming the largest single religious group.[6] In the 2001 Census, 36% of Edgware residents give their religion as Jewish, 28% Christian, 9% Hindu and 5% Muslim.[7] The Jewish community in Edgware has constructed its own Eruv.[8]

Station Road. Here, all buses climb up the hill towards the station and the shops. St Margaret of Antioch Church can be seen in the background. 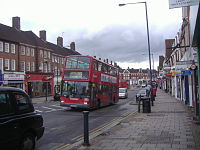 Station Road during a quiet evening, 2008. 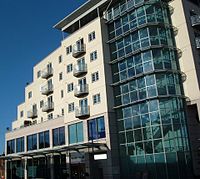 Main article: List of schools in the London Borough of Barnet