From Infogalactic: the planetary knowledge core
Jump to: navigation, search
For other uses, see Ediacara.

The Ediacaran Period's status as an official geological period was ratified in 2004 by the International Union of Geological Sciences (IUGS), making it the first new geological period declared in 120 years.[3][4][5] Although the Period takes its name from the Ediacara Hills where geologist Reg Sprigg first discovered fossils of the eponymous Ediacara biota in 1946, the type section is located in the bed of the Enorama Creek[6] within Brachina Gorge[7] in the Flinders Ranges of South Australia, at Lua error in Module:Coordinates at line 668: callParserFunction: function "#coordinates" was not found..

The Ediacaran Period overlaps, but is shorter than the Vendian Period, a name that was earlier, in 1952, proposed by Russian geologist and paleontologist Boris Sokolov. The Vendian concept was formed stratigraphically top-down, and the lower boundary of the Cambrian became the upper boundary of the Vendian.[8][9]

The Vendian in its type area consists of large subdivisions such as Laplandian, Redkino, Kotlin and Rovno Regional stages with the globally traceable subdivisions and their boundaries, including its lower one.

The Redkino, Kotlin and Rovno regional stages have been substantiated in the type area of the Vendian on the basis of the abundant organic-walled microfossils, megascopic algae, metazoan body fossils and ichnofossils.[9][13]

The lower boundary of the Vendian could have a biostratigraphic substantiation as well taking into consideration the worldwide occurrence of the Pertatataka assemblage of giant acanthomorph acritarchs.[12]

Boundaries of the Ediacaran 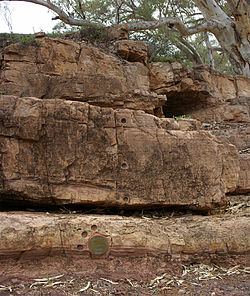 The 'golden spike' (bronze disk in the lower section of the image) or 'type section' of the Global Boundary Stratotype Section and Point (GSSP) for the base of Ediacaran period. 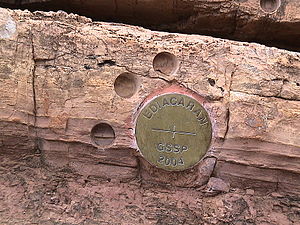 The 'golden spike' marking the GSSP 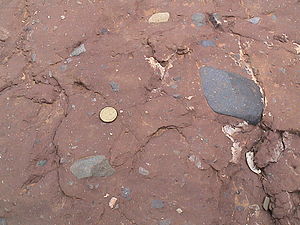 Although the Ediacaran Period does contain soft-bodied fossils, it is unusual in comparison to later periods because its beginning is not defined by a change in the fossil record. Rather, the beginning is defined at the base of a chemically distinctive carbonate layer that is referred to as a "cap carbonate," because it caps glacial deposits.

This bed is characterized by an unusual depletion of 13C that indicates a sudden climatic change at the end of the Marinoan ice age. The lower boundary GSSP of the Ediacaran is at the base of the cap carbonate (Nuccaleena Formation), immediately above the Elatina diamictite in the Enorama Creek section, Brachina Gorge, Flinders Ranges, South Australia.

The GSSP of the upper boundary of the Ediacaran is the lower boundary of the Cambrian on the SE coast of Newfoundland approved by the International Commission on Stratigraphy as a preferred alternative to the base of the Tommotian Stage in Siberia which was selected on the basis of the ichnofossil Treptichnus pedum (Seilacher, 1955). In the history of stratigraphy it was the first case of usage of bioturbations for the System boundary definition.

Nevertheless, the definitions of the lower and upper boundaries of the Ediacaran on the basis of chemostratigraphy and ichnofossils are disputable.[12][14]

Cap carbonates generally have a restricted geographic distribution (due to specific conditions of their precipitation)[vague] and usually siliciclastic sediments replace laterally the cap carbonates in a rather short distance and cap carbonates do not occur above every tillite elsewhere[clarification needed] in the world.

The C-isotope chemostratigraphic characteristics obtained for contemporaneous cap carbonates in different parts of the world may be variable in a wide range owing to different degrees of secondary alteration of carbonates, dissimilar criteria used for selection of the least altered samples, and, as far as the C-isotope data are concerned, due to primary lateral variations of δ l3Ccarb in the upper layer of the ocean.[12][15]

Furthermore, Oman presents in its stratigraphic record a large negative carbon isotope excursion, within the Shuram[16] Formation that is clearly away from any glacial evidence[17] strongly questioning systematic association of negative δ l3Ccarb excursion and glacial events.[18]

As to the Treptichnus pedum, a reference ichnofossil for the lower boundary of the Cambrian, its usage for the stratigraphic detection of this boundary is always risky, because of the occurrence of very similar trace fossils belonging to the Treptichnids group well below the level of T. pedum in Namibia, Spain and Newfoundland, and possibly, in the western United States. The stratigraphic range of T. pedum overlaps the range of the Ediacaran fossils in Namibia, and probably in Spain.[12][19]

No dating has been possible at the type section of the Ediacaran Period in South Australia. Therefore, the age range of 635 to 542 million years before the present is based on correlations to other countries where dating has been possible. The base age of approximately 635 million years ago is based on U-Pb (uranium-lead) isochron dating from Namibia[20] and China.[21]

Applying this age to the base of the Ediacaran assumes that individual cap carbonates are synchronous around the world and that the correct cap carbonate layers have been correlated between Australian and Namibia. This is controversial because an age of about 580 million years has been obtained in association with glacial rocks in Tasmania which some scientists tentatively correlate with those just beneath the Ediacaran rocks of the Flinders Ranges.[22] The age of the top is the same as the widely recognised age for the base of the Cambrian Period[23] 542± 0.3 Mya (million years ago).[24]

The fossil record from this period is sparse, as more easily fossilized hard-shelled animals had yet to evolve. The Ediacaran biota include the oldest definite multicellular organisms with tissues, and the most common types resemble segmented worms, fronds, disks, or immobile bags.

Ediacara biota bear little resemblance to modern lifeforms, and their relationship even with the later lifeforms of the Cambrian explosion is rather difficult to interpret. More than 100 genera have been described, and well known forms include Arkarua, Charnia, Dickinsonia, Ediacaria, Marywadea, Onega, Pteridinium, and Yorgia.

There is evidence that Earth's first mass extinction happened during this period when early animals changed the environment.[25]

A few English language documentaries have featured the Ediacaran era and biota: