From Infogalactic: the planetary knowledge core
Jump to: navigation, search
This article is about the Edict of Expulsion given by Edward I in 1290, that expelled all Jews from England. For the 1492 Edict of Expulsion from Spain, see Alhambra Decree. For other historic instances of Jews being expelled from the lands where they resided, see Jewish refugees.

In 1290, King Edward I issued an edict expelling all Jews from England. The expulsion edict remained in force for the rest of the Middle Ages. The edict was not an isolated incident, but the culmination of over 200 years of increased persecution. Oliver Cromwell permitted Jews to return to England in 1657, over 360 years after their banishment by Edward I, in exchange for finance.

The first Jewish communities of significant size came to England with William the Conqueror in 1066.[1] On the conquest of England, William instituted a feudal system in the country, whereby all estates formally belonged to the Crown; the king then appointed lords over these vast estates, but they were subject to duties and obligations (financial and military) to the king. Under the lords were further subjects such as serfs, who were bound and obliged to their lords, and their lords' obligations. Merchants had a special status in the system as did Jews. Jews were declared to be direct subjects of the King,[2] unlike the rest of the population. This was an ambivalent legal position for the Jewish population, in that they were not tied to any particular lord, but were subject to the whims of the king. This could at times prove advantageous and at other times disadvantageous. Every successive king formally reviewed a royal charter granting Jews the right to remain in England. Jews did not enjoy any of the guarantees of Magna Carta[3] of 1215.

Economically, Jews played a key role in the country. The church at the time strictly forbade the lending of money for profit. This created a vacuum in the economy of Europe that Jews filled due to extreme discrimination in every other economic area; canon law was not considered applicable to Jews, and Judaism permits loans with interest between Jews and non-Jews.[4] As a consequence, some Jews made large amounts of money. Taking advantage of their unique status as his direct subjects, the King could appropriate Jewish assets in the form of taxation. He levied heavy taxes on Jews at will without having to summon Parliament.[5] The Jewish community acted as a kind of giant monetary filter: Jews collected interest on money lent to the people which the King could take at his pleasure.

Jews acquired a reputation as extortionate moneylenders which made them extremely unpopular with both the church and the general public. While an anti-Jewish attitude was widespread in Europe, medieval England was particularly anti-Jewish.[3] An image of the Jew as a diabolical figure who hated Christ started to become widespread, and antisemitic myths such as the tale of the Wandering Jew and allegations of ritual murders originated and spread throughout England, as well as Scotland and Wales.[6] In frequent cases of blood libel, Jews were said to hunt for children to murder before Passover so they could use their blood to make matzah.[7] An anti-Jewish attitude on a number of occasions sparked riots where many Jews were murdered, most notably in 1190 when over a hundred Jews were massacred in the city of York.[7] 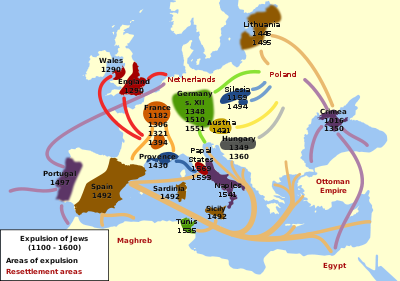 The situation only got worse for Jews as the 13th century progressed. In 1218, England became the first European nation to require Jews to wear a marking badge.[8] Taxation grew increasingly intense. Between 1219 and 1272, 49 levies were imposed on Jews for a total of 200,000 marks, a vast sum of money.[5] The first major step towards expulsion took place in 1275, with the Statute of the Jewry. The statute outlawed all lending at interest and gave Jews fifteen years to readjust.[9]

In the duchy of Gascony in 1287, King Edward ordered the local Jews expelled.[10] All their property was seized by the crown and all outstanding debts payable to Jews were transferred to the King’s name.[11] By the time he returned to England in 1289, King Edward was deeply in debt.[12] The next summer he summoned his knights to impose a steep tax. To make the tax more palatable, Edward in exchange essentially offered to expel all Jews.[13] The heavy tax was passed, and three days later, on July 18,[14] the Edict of Expulsion was issued. One official reason for the expulsion was that Jews had declined to follow the Statute of Jewry. The edict of expulsion was widely popular and met with little resistance, and the expulsion was quickly carried out.

The Jewish population in England at the time was relatively small, perhaps 2,000 people, though estimates vary.[15] The expulsion process appears to have been relatively non-violent, although there were some accounts to the contrary. One perhaps apocryphal story told of a captain taking a ship full of Jews to the Thames, en route to France, while the tide was low, and convincing them to go out for a walk with him. He then lost them and made it back to his ship quickly before the tide came back in, leaving them all to drown.[11]

Many Jews emigrated, besides France and the Netherlands, to countries such as Poland, which at that time protected them (see Statute of Kalisz).

Between the expulsion of Jews in 1290 and their formal return in 1655, there is no official trace of Jews as such on English soil except in connection with the Domus Conversorum, which kept a number of them within its precincts up to 1551 and even later. An attempt was made to obtain a revocation of the edict of expulsion as early as 1310, but in vain. Notwithstanding, a certain number of Jews appeared to have returned; for complaints were made to the king in 1376 that some of those trading as Lombards were actually Jews ("Rot. Parl." ii. 332a).

Occasionally permits were given to individuals to visit England, as in the case of Dr Elyas Sabot in 1410, but it was not until the expulsion of the Jews from Spain in 1492 and Portugal in 1497 that any considerable number of Sephardic Jews found refuge in England.[citation needed] One of these as early as 1493 attempted to recover no less a sum than 428,000 maravedis which the refugees from Spain had entrusted to Diego de Soria.[citation needed] In 1542 many were arrested on the suspicion of being Jews, and throughout the sixteenth century a number of persons named Lopez, possibly all of the same family, took refuge in England, the best known of them being Rodrigo López, physician to Queen Elizabeth I, and who is said to have been the origin of Shylock.[16] Besides certain distinguished converts like Immanuel Tremellius and Philip Ferdinand, the most remarkable visitor was Joachim Gaunse, who introduced new methods of mining into England.[citation needed] Occasional visitors, like Alonzo de Herrera and Simon Palache in 1614, are recorded.[citation needed] The writings of John Weemes provided a positive view in favour of the resettlement of the Jews in England.[citation needed]