From Infogalactic: the planetary knowledge core
Jump to: navigation, search
"Tanzimat Edict" redirects here. For for the 1856 edict, often referred to as "Tanzimat Reform Edict", see Ottoman Reform Edict of 1856. 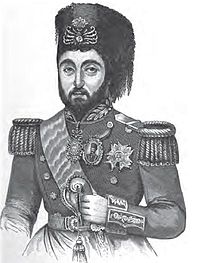 Mustafa Reşid Pasha, the principal architect of the Edict of Gülhane
(The Ottoman Imperial Edict of Reorganization, proclaimed on November 3rd, 1839)

The Gülhane Hatt-ı Şerif (Supreme Edict of the Rosehouse) or Tanzimât Fermânı (Imperial Edict of Reorganization) was a proclamation by Ottoman sultan Abdülmecid I in 1839 that launched the Tanzimât period of reforms and reorganization in the Ottoman Empire.

The proclamation was issued at the behest of reformist Grand Vizier Mustafa Reşid Pasha. It promised reforms such as the abolition of tax farming, reform of conscription, and guarantee of rights to all Ottoman citizens regardless of religion or ethnic group.[1] The goal of the decree was to help modernize the empire militarily and socially so that it could compete with the Great Powers of Europe. It also was hoped the reforms would win over the disaffected parts of the empire, especially in the Ottoman controlled parts of Europe, which were largely Christian.

The Edict of Gülhane was never fully implemented. At the end of the Crimean War, the Western powers pressured Turkey to undertake further reforms, mainly to deprive the Russians, with whom peace negotiations were then under way, of any further pretense for intervention in the internal affairs of the Ottoman Empire. The result of these pressures was the proclamation of the Hatt-ı Hümâyûnu (Imperial Rescript) of 18 February 1856.[2]

While the Edict of Gülhane was more complex, it consisted mainly of three demands. The first was an guaranteed insurance of the security of life of every subject. The direction of thought here being that if a subject's life is endangered, he/she can become a danger to others and the sultan, since people do many things out of fear in order to protect their health. If there is an absence of security to fortune, everyone is insensible to the government and public good. The second proposed a regular system of assessing and levying taxes, troops, and duration of service. Subjects would be taxed a quota determined by their means and a reduced military term would lessen the blow that occurred to industries when the men were away. This collection of demands can be summed up under the title of governmental impositions on subjects. This new system of taxing ended tax-farming and introduced taxing based on means rather than a flat rate. Finally, the third dealt with reformation in the area of human rights and the justice system. The accused were to be granted public trials; individuals could possess and dispose of property in freedom; and punishments were to fit the deed regardless of rank. Reward by merit was presented in this edict. Additionally, the edict emancipated minorities, which granted them the opportunity to be conscripted. However, conscription could be avoided by minorities if they paid the Jizya. This allowed minorities of means to avoid conscription and it allowed for the military to mostly maintain its purity of minorities. Below are some of the important clauses in detail:[3]

Some of the most important clauses are as follows:

Changes and effects of the Edict of Gülhane

Some of the changes instituted by the Edict of Gülhane:[7]