Not to be confused with the University of Edinburgh.

Edinboro University is a public liberal arts university located in Edinboro, Pennsylvania, United States, and one of 14 schools associated with the Pennsylvania State System of Higher Education (PASSHE). The town is named after Edinburgh in Scotland. Edinboro University is accredited by the Middle States Association of Colleges and Schools (MSACS). It has more than 8,000 enrolled students spread between the 585 acres (237 ha) main campus as well as the Porreco Center in Erie and a temporary campus location at Parkside Commons in Meadville.

The main campus is located 20 miles (32 km) from Erie and within 5 miles (8.0 km) of the educational and major population centers of McKean, Waterford, and Albion. The main campus has 42 buildings on a 585-acre (2.37 km2) campus which includes a 5-acre (20,000 m2) pond, open fields and woods, 11 on-campus residence halls (Highlands 1~8, Earp Hall, Dearborn Hall and Lawrence Towers) for approximately 5,000 students, and the modern seven-story Baron-Forness Library with more than 490,000 bound volumes, 1.4 million microform units, and Internet access. Edinboro University offers 100 degree programs and 57 minors. More than one-half of the faculty members at Edinboro University have earned doctorates or the highest degree attainable in their field. Many of them have been recognized nationally and internationally for their outstanding research and scholarly accomplishments. In addition, a number of faculty members have held state and national leadership roles in their professional organizations. The student-faculty ratio is 18:1.

Many facilities on Edinboro's campus are new, recently renovated, or have plans for renovation. In fall 2007, Academy Hall, the first building on Edinboro's campus, was reopened after a complete renovation in honor of the university's 150th Anniversary. Major renovations to Sox Harrison Stadium were completed by a gift from the Student Government Association, giving the football and track facilities Sportexe artificial turf, a new scoreboard, and lighting. A new state-of-the-art facility for the music program, the William Alexander Music Center, and a major renovation to the Frank G. Pogue Student Center were completed in early 2008. The Mike S. Zafirovski Sports and Recreation Center, a large domed indoor recreation and event facility, was completed in 2009. The university completed a $115 million partnership between American Campus Communities and the Edinboro University Foundation to construct eight suite-style residence halls. More recently the Commonwealth of Pennsylvania funded major renovations of Cooper Science Hall, Ross Hall with a climate controlled pedestrian bridge to the library, and making the president's home ADA compliant.

Edinboro students may also choose to complete coursework toward workforce-related associate's degrees at The Porreco College in Erie (the Parkside Commons classroom in Meadville was closed in 2014). The Porreco Center sits on the former Louis Porreco horse farm and estate in Millcreek Township and allows students to complete a community college-like education without leaving the Erie area. The Porreco Center consists of 10 buildings and a small pond.

File:Edin.jpg
The fountain on Mallory Lake and the Baron-Forness Library

An international education program provides educational opportunities for students from 37 other countries. Visiting scholars from around the world serve as resource individuals for area schools, businesses and industries, in addition to providing special lectures, seminars and workshops for Edinboro students and faculty. 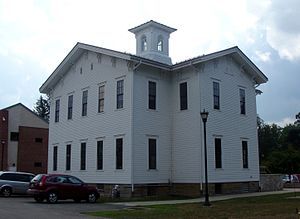 Edinboro University was founded as the Edinboro Academy, a private training school for Pennsylvania teachers in 1857, by the region's original Scottish settlers. It is the oldest training institution west of the Allegheny Mountains and the second oldest in all of Pennsylvania. In the beginning, Edinboro modestly consisted of one two-story building, six classrooms, three instructors, 110 students and a principal. That original building still stands—Academy Hall—the home of the undergraduate admissions office. In 1861, the Edinboro Academy affiliated with the Commonwealth of Pennsylvania to become the second State Normal School in Pennsylvania, occasionally known as the Northwest State Normal School. In 1914, the state purchased the school from the original stockholders and renamed the Edinboro State Normal School. By 1927, the advancement of academic programs to include liberal arts study required the school to rename itself Edinboro State Teachers College. Further development of the liberal arts to include degree programs outside the field of education result in Edinboro becoming Edinboro State College in 1960. Continued development of undergraduate liberal arts programs and advanced graduate degrees earned Edinboro university status in 1983.[4]

Edinboro now has more than 40 buildings on 585 acres (2.37 km2) and locations in Erie and Meadville. Edinboro University celebrated its 150th anniversary in 2006-07. Today, the academic focus at Edinboro goes well beyond the training of teachers. It has been transformed into what is now northwestern Pennsylvania's largest university.

As of Spring 2011, Edinboro is the first school in the world to offer a music education degree (BAME) that is open to students with a focus in bag-piping. The university and town that share the Edinboro name were founded by Scottish immigrants. Holding to its tradition, Edinboro University has a pipe band (a band that consists of bagpipes, snare drums and a bass drum) that performs alone and also with the "Spirit of the Scots" marching band for school related functions. Each year, Edinboro hosts a three-day highland games festival complete with Scottish games; dancing; bagpipe band; and cheese-based frying competitions. The University's fight song is a unique [sic] version of Scotland the Brave.

Social fraternities and sororities at Edinboro include: