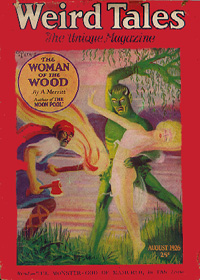 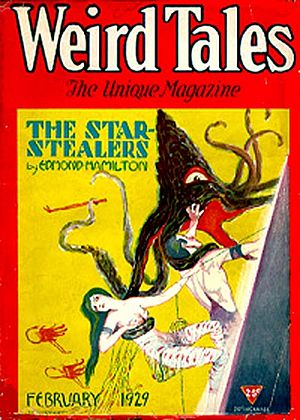 "The Star-Stealers" was first published in the February 1929 issue of Weird Tales. 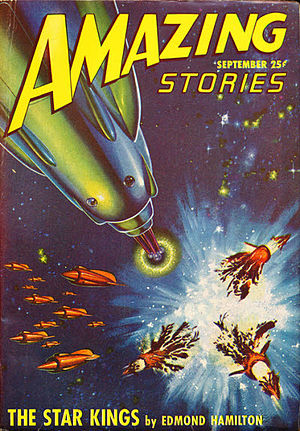 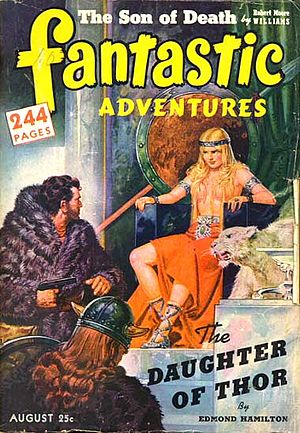 Hamilton's novella "The Daughter of Thor" was the cover story for the August 1942 issue of Fantastic Adventures. 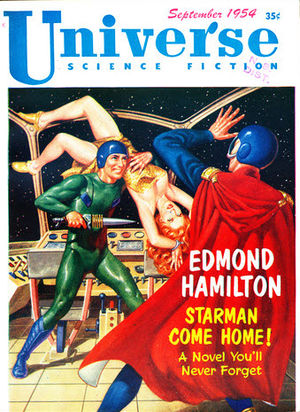 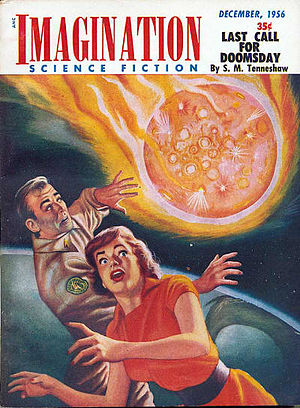 Hamilton's novella "Last Call for Doomsday!", written for Imagination under the house name "S. M. Tenneshaw", has never been included in an authorized Hamilton collection 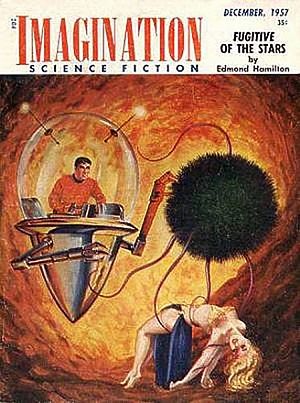 Hamilton's short novel "Fugitive from the Stars", cover-featured on the December 1958 issue of Imagination, was revised and published in an Ace Double in 1965

Edmond Moore Hamilton (October 21, 1904 – February 1, 1977) was an American writer of science fiction during the mid-twentieth century.[2]

Born in Youngstown, Ohio, he was raised there and in nearby New Castle, Pennsylvania. Something of a child prodigy, he graduated from high school and entered Westminster College in New Wilmington, Pennsylvania at the age of 14, but washed out at 17.

Edmond is credited[citation needed] with writing the first hardcover compilation of what would eventually come to be known as the science fiction genre, The Horror on The Asteroid and Other Tales of Planetary Horror (1936). The book compiles the following stories: "The Horror on the Asteroid", "The Accursed Galaxy", "The Man Who Saw Everything" ("The Man With the X-Ray Eyes"), "The Earth-Brain", "The Monster-God of Mamurth", and "The Man Who Evolved".

His career as a science fiction writer began with the publication of "The Monster God of Mamurth", a short story, in the August 1926 issue of Weird Tales[3]—now a classic magazine of alternative fiction. Hamilton quickly became a central member of the remarkable group of Weird Tales writers assembled by editor Farnsworth Wright, that included H. P. Lovecraft and Robert E. Howard. Weird Tales would publish 79 works of fiction by Hamilton from 1926 to 1948, making him one of the magazine's most prolific contributors (only Seabury Quinn and August Derleth appeared more frequently).[citation needed] Hamilton became a friend and associate of several Weird Tales veterans, including E. Hoffmann Price and Otis Adelbert Kline; most notably, he struck up a 20-year friendship with close contemporary Jack Williamson, as Williamson records in his 1984 autobiography Wonder's Child. In the late 1930s Weird Tales printed several striking fantasy tales by Hamilton, most notably "He That Hath Wings" (July 1938), one of his most popular and frequently-reprinted pieces.

Through the late 1920s and early 1930s Hamilton wrote for all of the SF pulp magazines then publishing, and contributed horror and thriller stories to various other magazines as well. He was very popular as an author of space opera, a subgenre he created along with E.E. "Doc" Smith. His story "The Island of Unreason" (Wonder Stories, May 1933) won the first Jules Verne Prize as the best SF story of the year (this was the first SF prize awarded by the votes of fans, a precursor of the later Hugo Awards). In the later 1930s, in response to the economic strictures of the Great Depression, he also wrote detective and crime stories. Always prolific in stereotypical pulp magazine fashion, Hamilton sometimes saw 4 or 5 of his stories appear in a single month in these years; the February 1937 issue of the pulp Popular Detective featured three Hamilton stories, one under his own name and two under pseudonyms. In the 1940s, Hamilton was the primary force behind the Captain Future franchise,[5] an SF pulp designed for juvenile readers that won him many fans, but diminished his reputation in later years when science fiction moved away from space opera. Hamilton was always associated with an extravagant, romantic, high-adventure style of SF, perhaps best represented by his 1947 novel The Star Kings. As the SF field grew more sophisticated, his brand of extreme adventure seemed ever more quaint, corny, and dated.

In 1946 Hamilton began writing for DC Comics, specializing in stories for their characters Superman[4] and Batman. One of his best known Superman stories was "Superman Under the Red Sun", which appeared in Action Comics No. 300 in 1963 and which has numerous elements in common with his 1951 novel City At World's End.[5] He was instrumental in the early growth of the Legion of Super-Heroes series, as one of its first regular writers. He introduced many of the early Legion concepts into the DC Universe. He also wrote other works for DC, including the short-lived science fiction series Chris KL-99 (in Strange Adventures), which was loosely based on Captain Future. Hamilton retired from comics in 1966.

In 1969, the MacFadden-Bartell Corporation, New York, published a collection of short science fiction stories "Alien Earth and Other Stories" (520-00219-075), where Hamilton's 1949 "Alien Earth" was featured along with novelettes by Isaac Asimov, Robert Bloch, Ray Bradbury, Arthur C. Clarke [and others].

On December 31, 1946, Hamilton married fellow science fiction author and screenwriter Leigh Brackett in San Gabriel, CA, and moved with her to Kinsman, Ohio. Afterward he would produce some of his best work, including his novels The Star of Life (1947), The Valley of Creation (1948), City at World's End (1951)[3] and The Haunted Stars (1960). In this more mature phase of his career, Hamilton moved away from the romantic and fantastic elements of his earlier fiction to create some unsentimental and realistic stories, such as "What's It Like Out There?" (Thrilling Wonder Stories, Dec. 1952), his single most frequently-reprinted and anthologized work.

Though Hamilton and Leigh Brackett worked side by side for a quarter-century, they rarely shared the task of authorship; their single formal collaboration, Stark and the Star Kings (originally intended for Harlan Ellison's The Last Dangerous Visions), would not appear in print until 2005. In the early 1960s, it has been speculated that when Brackett had temporarily abandoned SF for screenwriting, Hamilton did an uncredited revision and expansion of two early Brackett stories, "Black Amazon of Mars" and "Queen of the Martian Catacombs"—revised texts were published as the novellas People of the Talisman and The Secret of Sinharat (1964).

Edmond Hamilton died February 1977 in Lancaster, California, of complications following kidney surgery. In the year before his death, Toei Animation had launched production of an anime adaptation of his Captain Future novels and Tsuburaya Productions adapted Star Wolf into a tokusatsu series; both series were aired on Japanese television in 1978. The Captain Future adaptation was later exported to Europe, winning Hamilton a new and different fan base than the one that had acclaimed him half a century before, notably in France and Germany.

Joint interviews of Brackett and Hamilton were published in Tangent (Summer 1976, by Dave Truesdale)[6] and Amazing Stories (January 1978, by Darrell Schweitzer)[3]—the latter published several months after Hamilton's death, but conducted "much earlier", Truesdale attributes to Schweitzer.[6]

A space opera sequence based on the seminal "Crashing Suns". With the exception of "The Sun People", the stories were assembled as Crashing Suns in 1965.

A space opera sequence: the first, The Star Kings, is a reworking of The Prisoner of Zenda while Return to the Stars is a fix-up of four stories: "Kingdoms of the Stars", "The Shores of Infinity", "The Broken Stars" and "The Horror from the Magellanic". A crossover between this universe and Brackett's, "Stark and the Star Kings", was released in 2005, having originally been submitted to The Last Dangerous Visions. Two further stories in the same universe, "The Star Hunter" (1958) and "The Tattooed Man" (1957), were reissued in 2014 as The Last of the Star Kings. 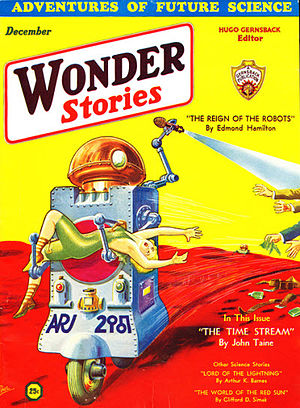 Frank R. Paul's cover for the December 1931 Wonder Stories, illustrating Hamilton's "The Reign of the Robots", was revived in 2013 for the cover of a volume of Hamilton's collected fiction

In 2009, Haffner Press released the first two books in a program to collect all of Hamilton's prose work. A volume (the first of six) collecting the first four Captain Future novels also appeared at the same time. Early in 2010, additional volumes were announced.