Edmund Beaufort, 2nd Duke of Somerset, KG (1406 – 22 May 1455), sometimes styled 1st Duke of Somerset, was an English nobleman and an important figure in the Wars of the Roses and in the Hundred Years' War. He also succeeded in the title of 4th Earl of Somerset and was created 1st Earl of Dorset and 1st Marquess of Dorset (previously held by his father and later forfeited), and Count of Mortain. He was known for his deadly rivalry with Richard Plantagenet, 3rd Duke of York.

Although he was the head of one of the greatest families in England, his inheritance was worth only 300 pounds. By contrast his rival, Richard, Duke of York, had a net worth of 5,800 pounds. His cousin King Henry VI's efforts to compensate Somerset with offices worth 3,000 pounds only served to offend many of the nobles and as his quarrel with York grew more personal, the dynastic situation got worse. Another quarrel with the Earl of Warwick over the lordships of Glamorgan and Morgannwg may have forced the leader of the younger Nevilles into York's camp.

His brothers were taken captive at the Battle of Baugé in 1421, but Edmund was too young at the time to fight. He acquired much military experience while his brothers were prisoners.

Affair with Catherine of Valois

In 1427 it is believed that Edmund Beaufort may have embarked on an affair with Catherine of Valois—the widow of Henry V. Evidence is sketchy, however the liaison prompted a parliamentary statute regulating the remarriage of queens of England. The historian G. L. Harriss surmised that it was possible that another of its consequences was Catherine's son Edmund Tudor and that Catherine, to avoid the penalties of breaking the statute of 1427–8, secretly married Owen Tudor. He wrote: "By its very nature the evidence for Edmund ‘Tudor's’ parentage is less than conclusive, but such facts as can be assembled permit the agreeable possibility that Edmund ‘Tudor’ and Margaret Beaufort were first cousins and that the royal house of ‘Tudor’ sprang in fact from Beauforts on both sides."[1]

Edmund became a commander in the English army in 1431. After his recapture of Harfleur and his lifting of the Burgundian siege of Calais, he was named a Knight of the Garter in 1436. After subsequent successes he was created Earl of Dorset in 1442 and the following year Marquess of Dorset. During the five-year truce from 1444 to 1449 he served as Lieutenant of France. In March 1448 he was created Duke of Somerset. As the title had previously been held by his brother, he is usually called the second duke.

Somerset was appointed to replace York as commander in France in 1448. Fighting began in Normandy in August 1449. Somerset's subsequent military failures left him vulnerable to criticism from York's allies. Somerset was supposed to be paid £20,000; but little evidence exists that he was. He failed to repulse French attacks, and by the summer of 1450 nearly all the English possessions in northern France were lost. By 1453 all the English possessions in the south of France were also lost, and the Battle of Castillon ended the Hundred Years War.

Power had rested with Somerset from 1451 and he virtually monopolised it, with Margaret of Anjou, wife of Henry VI, as one of his principal allies. It was also widely suspected that Edmund had an extra-marital affair with Margaret. After giving birth to a son in October 1453, Margaret took great pains to quash rumours that Somerset might be his father. During her pregnancy, Henry had suffered a mental breakdown, leaving him in a withdrawn and unresponsive state that lasted for one and a half years. This medical condition, untreatable either by court physicians or by exorcism, plagued him throughout his life. During Henry's illness, the child was baptised Edward, Prince of Wales, with Somerset as godfather; if the King could be persuaded, he would become legal heir to the throne. Somerset's fortunes, however, soon changed when his rival York assumed power as Lord Protector and imprisoned him in the Tower of London. Somerset's life was probably saved only by the King's seeming recovery late in 1454, which forced York to surrender his office. Henry agreed to recognise Edward as his heir, putting rest to concerns about a successor prompted by his known aversion to physical contact; subsequently he came to view Edward's birth as a miracle.[3][4]

By now York was determined to depose Somerset by one means or another, and in May 1455 he raised an army. He confronted Somerset and the King in an engagement known as the First Battle of St Albans which marked the beginning of the Wars of the Roses. Somerset was killed in a last wild charge from the house where he had been sheltering. His son, Henry, never forgave York and Warwick for his father's death, and he spent the next nine years attempting to restore his family's honour.

Their unlicensed marriage was later pardoned on 7 March 1438, and they had the following children: 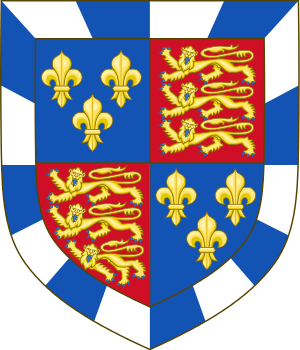 The Arms of Beaufort, Earls and Dukes of Somerset

As Duke of Somerset, Edmund Beaufort's arms were the Royal Arms of England within a bordure compony argent and azure.