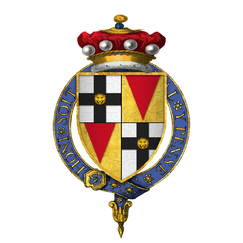 He was the eldest son and heir of John Brydges, 1st Baron Chandos of Sudeley Manor, Gloucestershire and Elizabeth Grey, daughter of Edmund Grey, 9th Lord Grey of Wilton. He succeeded to the barony on 12 April 1557 upon the death of his father.

He served in the army in France in 1544 and then in Scotland, being knighted in 1547 at the Battle of Pinkie Cleugh. He was elected Member of Parliament for Wootton Bassett in 1545 and knight of the shire for Gloucestershire in 1553. He was elevated to Knight of the Garter in 1572.[1]

He was the first husband of Dorothy Bray, who, several years prior to their marriage in 1546, had engaged in a love affair at court with William Parr, 1st Marquess of Northampton. Chandos and Dorothy together had five sons and a daughter.

Chandos died in 1573 and was succeeded by his eldest son Giles Brydges, 3rd Baron Chandos and, after the death of Giles in 1594, by his younger son William Brydges, 4th Baron Chandos.