Edmund Crouchback (16 January 1245 – 5 June 1296), a member of the House of Plantagenet, was the second surviving son of Henry III of England and Eleanor of Provence. In his childhood he had a claim on the Kingdom of Sicily, but he never ruled there. In 1265 he was granted all the lands of Simon de Montfort and from 1267 he was titled Earl of Leicester. In that year he also began to rule Lancashire, but he did not take the title Earl of Lancaster until 1276. Between 1276 and 1284 he governed the counties of Champagne and Brie with his second wife, Blanche of Artois, in the name of her daughter Joan. His nickname, "Crouchback" (meaning "crossed-back"), refers to his participation in the Ninth Crusade.[1]

In 1255 he was invested ruler of the Kingdom of Sicily and Apulia by the Bishop of Romania, on behalf of Pope Innocent IV. In return his father undertook to pay the papacy 135,541 marks and fight a war to dislodge Manfred of Sicily from the kingdom. Upon Innocent's death, Pope Alexander IV confirmed Edmund's grant of Sicily.[2] Henry's barons refused to contribute to what they called the "Sicilian business" and ultimately Henry was only able to pay 60,000 marks. Stephen Runciman says the grant of the kingdom was revoked by Pope Alexander IV on 18 December 1258;[3] Baines and Harland state that this occurred in 1263 under Pope Urban IV. Edmund renounced his claim to the crown of Sicily. 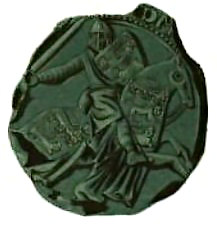 Edmund soon obtained, however, important possessions and dignities, for soon after the forfeiture of Simon de Montfort, 6th Earl of Leicester on 25 October 1265, Edmund received the Earldom of Leicester[2] and later that of Lancaster. He was granted the honour of the Stewardship of England and the lands of Nicolas de Segrave. He also acquired the titles and estates of Lord Ferrers, that included the earldom of Derby, and the Honour of Hinckley Castle.

In 1267 he was granted the lordship of Builth Wells in opposition to the then holder, Llywelyn ap Gruffudd (the last prince of an independent Wales). To help him conquer the land he was also granted his elder brother's lordships of the Trilateral of Skenfrith, Grosmont and White Castle together with Monmouth. After the civil war in 1267, he was appointed High Sheriff of Lancashire. Henry III created his second son Earl of Leicester in 1267, granting the honour and privileges of that city. The following year, he was made Constable of Leicester Castle, a royal possession in the king's name. By now Crouchback had a reputation for being a ruthless and ferocious warrior, but he was not in England fighting de Montfort.[4]

In 1271 he accompanied his elder brother Edward on the Ninth Crusade to Palestine. Some historians, including the authors of the Encyclopædia Britannica article on him, state that it was because of this that he received the nickname Crouchback (which means "cross back") indicating that he was entitled to wear a cross stitched into the back of his garments.

Edmund remained loyal to his brother, Edward I, who confirmed the Charter grants of 1265, 1267, and 1268-9, in a document of Inspeximus in 1284, and by parliament in the Great Charter of Leicester.[5] He fequently acted as an ambassador abroad. In 1291, he was sent as Governor of Ponthieu, on behalf of his second wife, Blanche of Artois.

On his return from the Crusade of 1271-2 he seems to have made Grosmont Castle his favoured home and undertook much rebuilding there. His son Henry, 3rd Earl of Lancaster was apparently born there in 1281.

Edmund's duty to the church included the foundation of the Nuns of Clara, Minories, at St Aldate's. In 1291, his estate paid for the establishment for the Chapel of Savoy, in memory of his mother, at St Clement Danes. Filial piety was part of the chivalric code of an honourable knight. He was a generous benefactor to the monastery of Grace Dieu in Leicestershire, and the nuns at Tarrant Crawford.

He also helped establish a major Grey friars monastery at Preston in the duchy of Lancaster. In 1281 he supervised the construction of Aberystwyth Castle for King Edward I to subjugate the Welsh. The next year he accompanied Roger Mortimer on campaign against Llywelyn, defeating and capturing the prince.

He took an army to Bordeaux for his brother. Amongst the nobles[6] was the Earl of Lincoln and 26 banneret knights. During the siege of Bayonne the English ran out of money, so the army melted into the countryside. Broken-hearted the warrior-prince Edmund Crouchback died on 5 June. His body was carried to England and was interred on 15 July 1296 at Westminster Abbey, London. 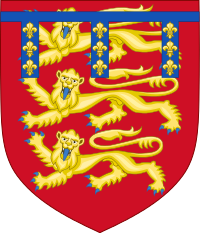 Edmund bore the arms of the kingdom, differenced by a label France of three points (that is to say azure three fleur-de-lys or, each).[7]

Edmund married (1st) 8 April 1269 Aveline de Forz, the daughter of William de Forz, 4th Earl of Albemarle and Isabella de Fortibus, Countess of Devon. She died just 4 years after the marriage, at the age of 15, and was buried at Westminster Abbey. The couple had no children, though some sources believe she may have died in childbirth or shortly after a miscarriage.[citation needed]

He married (2nd) in Paris, on 3 February 1276 Blanche of Artois, widow of King Henry I of Navarre, daughter of Robert I of Artois and Matilda of Brabant. With Blanche he had three children: