Edmund Grindal (c. 1519 – 6 July 1583) was an English Protestant leader who successively held the posts of Bishop of London, Archbishop of York and Archbishop of Canterbury during the reign of Elizabeth I of England. 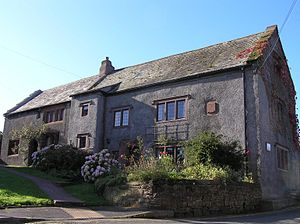 Early life to the death of Edward VI

Tradition, also retailed by Grindal's biographer John Strype, had long held that Grindal was born in Hensingham, now a suburb of Whitehaven.[1] However recent scholarship has shown that his birthplace was Cross Hill House, St. Bees, Cumberland.[2] Grindal himself gave a description of his birthplace in a letter to Sir William Cecil, Elizabeth I's Secretary of State, "... the house wherein I was born, and the lands pertaining thereto, being a small matter, under twenty shillings rent, but well builded at the charges of my father and brother", which corresponds to Cross Hill House. This has been proven by the discovery of the long-mislaid St. Bees long leases, which have provided the missing link in the chain of ownership back to William Grindal, Edmund's father, a farmer in the village.[3] Edmund Grindal's exact date of birth is uncertain, but is c.1519. His education may have started with the monks at the nearby St Bees Priory, though this is not recorded. It is believed by Collinson[4] that both Grindal and Edwin Sandys shared a childhood, quite probably in St Bees. Sandys himself recalled that he and Grindal had lived "familiarly" and "as brothers" and were only separated between Sandys's 13th and 18th Years. It is thought likely that Sandys grew up at nearby Rottington. Edwin Sandys kept one step behind Grindal in their subsequent careers, succeeding him as bishop of London, and then as archbishop of York. Whatever the place of early education, it is known that the Marian martyr John Bland was the schoolmaster of Sandys,[4] so it is likely he would also have taught Grindal.

Grindal was educated at Magdalene and Christ's Colleges and then at Pembroke Hall, Cambridge, where he graduated BA and was elected fellow in 1538.[5] Having obtained his MA in 1541, he was ordained deacon in 1544, appointed proctor in 1550 and was Lady Margaret preacher 1548–1549. Probably through the influence of Nicholas Ridley, who had been master of Pembroke Hall, Grindal was selected as one of the Protestant disputants during the visitation of 1549. He had a talent for this work and was often given similar tasks. When Ridley became Bishop of London, he made Grindal one of his chaplains and gave him the precentorship of St Paul's Cathedral. He was soon promoted to be one of King Edward VI's chaplains and prebendary of Westminster, and in October 1552 was one of six to whom the Forty-Two Articles were submitted for examination before being sanctioned by the Privy Council. According to John Knox, Grindal distinguished himself from most of the court preachers in 1553 by denouncing the worldliness of courtiers and foretelling the evils that would follow the king's death.

Grindal benefited greatly from the patronage of Ridley and Sir William Cecil during this period, to the extent that on 11 June 1553 he was nominated to be bishop of London.[4] However, only a month later Edward VI was dead, and very soon Catholicism would return under Mary I.

Although Grindal was not politically compromised by the events surrounding the accession of Mary I in October 1553, he had resigned his Westminster prebend by 10 May 1554, and made his way to Strasbourg as one of the Marian exiles. In 1554 he was in Frankfurt, where he tried to settle the disputes between the "Coxians", who regarded the 1552 Prayer Book as the perfection of reform, and the "Knoxians", who wanted further simplification.

He returned to England in January 1559 in the company of his friend Edwin Sandys, on the day that Elizabeth I was crowned.[6] He was soon gathered in to the body of men who would be at the centre of establishing the reformed church. He was appointed to the committee to revise the liturgy, and was one of the Protestant representatives at the Westminster conference. In July 1559 he was elected Master of Pembroke Hall in succession to the recusant Dr Thomas Young (1514?–1580) and finally created Bishop of London in succession to Edmund Bonner, six years after his first nomination in Edward's reign.[4] About this time he ordained to the ministry his friend the martyrologist John Foxe.[4]

Grindal had qualms about vestments and other traces of "popery" as well as about the Erastianism of Elizabeth's ecclesiastical government. Firmly Protestant, he did not mind recommending that a priest "might be put to some torment",[7] and in October 1562 he wrote to William Cecil, begging to know "if that second Julian, the king of Navarre, is killed; as he intended to preach at St Paul's Cross, and might take occasion to mention God's judgements on him".[8] Nevertheless, he was reluctant to execute judgements on English Puritans, and failed to give Matthew Parker much assistance in rebuilding the shattered fabric of the English Church.

Grindal lacked that firm faith in the supreme importance of uniformity and autocracy which enabled John Whitgift to persecute nonconformists whose theology was identical to his own. London, which was always a difficult see, involved Bishop Sandys in similar troubles when Grindal had gone to York. As it was, although Parker said that Grindal "was not resolute and severe enough for the government of London," his attempts to enforce the use of the surplice evoked angry protests, especially in 1565, when many nonconformists were suspended; and Grindal of his own accord denounced Thomas Cartwright to the Council in 1570. Other anxieties were brought upon him by the burning of his cathedral in 1561, for although Grindal himself is said to have contributed £1200 towards its rebuilding, the laity and even the clergy of his diocese were not generous.

In 1570 Grindal became Archbishop of York, where Puritans were few and coercion would be required mainly for Roman Catholics. His first letter from his residence at Cawood to Cecil told that he had not been well received, that the gentry were not "well-affected to godly religion and among the common people many superstitious practices remained." It is admitted by his Anglican critics that he did the work of enforcing uniformity against the Roman Catholics with good-will and considerable tact. He must have given general satisfaction, for even before Parker's death two persons so different as Cecil (now Lord Burghley), and Dean Nowell independently recommended Grindal's appointment as his successor, and Edmund Spenser spoke warmly of him in The Shepheardes Calender as the "gentle shepherd Algrind."

Grindal was appointed Archbishop of Canterbury on 26 July 1575, though there is no actual proof that the new archbishop ever visited the seat of his see, Canterbury, not even for his enthronement.

Burghley wished to conciliate the moderate Puritans and advised Grindal to mitigate the severity which had characterised Parker's treatment of the nonconformists. Grindal indeed attempted a reform of the ecclesiastical courts, but his activity was cut short by a disagreement with the queen. Elizabeth wanted Grindal to suppress the "prophesyings" or meetings for discussion which had come into vogue among the Puritan clergy, and she even wanted him to discourage preaching. Grindal remonstrated, claiming some voice for the Church, and in June 1577 was suspended from his jurisdictional, though not his spiritual, functions for disobedience. He stood firm, and in January 1578 Secretary Wilson informed Burghley that the queen wished to have the archbishop deprived. She was dissuaded from this extreme course, but Grindal's sequestration was continued in spite of a petition from Convocation in 1581 for his reinstatement. Elizabeth then suggested that he should resign; he declined to do so, and after apologising to the queen he was reinstated towards the end of 1582. But his infirmities were increasing, and while making preparations for his resignation, he died and was buried in Croydon Parish Church. 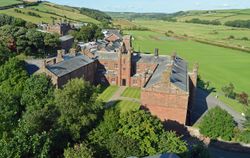 St. Bees School, Cumbria, the Foundation block. The original Elizabethan school is the range on the left of the quad.

By the seventeenth century, Grindal came to be admired by the Puritans who were experiencing persecution at the hands of Archbishop Laud. John Milton, who thought the Elizabethan bishops Laodiceans, neither hot nor cold, and who rejected episcopal church government, thought Grindal "the best of them" in his tract Of Reformation of 1641.[9] William Prynne had no time for Parker ("over pontifical and princely") and Whitgift ("stately pontifical bishop") but praised Grindal in 1641 as "a grave and pious man".[9] Richard Baxter in 1656 claimed of Grindal: "Such bishops would have prevented our contentions and wars".[10] Daniel Neal a century later in his History of the Puritans called him "the good old archbishop", "of a mild and moderate temper, easy of access and affable even in his highest exaltation", "upon the whole...one of the best of Queen Elizabeth's bishops".[9]

Conversely, Grindal came to be attacked by High Church Tories. Henry Sacheverell, in his famous sermon of 5 November 1709, "The Perils of False Brethren, Both in Church and State", attacked him as "that false son of the Church, Bishop Grindall...a perfidious prelate" who deluded Elizabeth into tolerating the "Genevan Discipline" and thereby facilitating "the first plantation of dissenters". This attack on Grindal's memory led to John Strype publishing his biography of Grindal, helped by a subscription list that included many leading Whig politicians and churchmen.[11]

By the late nineteenth and early twentieth centuries, it was Sacheverell's portrayal of a weak and ineffective prelate that had come to be the predominant view. Sidney Lee claimed Grindal "feebly temporised with dissent"; Mandell Creighton called him "infirm of purpose"; Walter Frere said Grindal possessed a "natural incapacity for government"; and W. P. M. Kennedy claimed he had "a constitutional incapacity for administration" which was Grindal's "outstanding weakness".[2] However, in 1979 was published the first critical biography of Grindal, by Patrick Collinson, who claimed Grindal was neither weak nor ineffectual but had the support of his fellow bishops and led the way for how the Anglican Church would develop in the early seventeenth century.[2]

He left considerable benefactions to Pembroke Hall, Cambridge, the Queen's College, Oxford, and Christ's College, Cambridge; he also endowed a free school at St Bees, and left money for the poor of St Bees, Canterbury, Lambeth and Croydon.

The most enduring monument to Grindal has up till now proved to be the St Bees School ( a "free grammar school"), which he founded in his native village of St Bees, where he had not been for perhaps forty-five years. However, in 2015 it was announced that the school was to close, though efforts persist to keep it open. Only three days before his death Grindal had published statutes for the school; a series of minute and specific regulations which are a noted treasury of information for historians of Tudor education. Although the school was to be sometimes at risk in its early years, a school building had been erected by 1588 at a cost of £366.3s.4d. and endowed with annual revenues of £50. Nicholas Copland was nominated by Grindal as the first Headmaster and a tradition of learning had begun which continued without a break for over four centuries.

Grindal also played a part in the establishment of Highgate School in North London, and is credited with having introduced the tamarisk tree to the British Isles.