Edmund I (Old English: Ēadmund; 921 – 26 May 946), called the Elder, the Deed-doer, the Just, or the Magnificent, was King of the English from 939 until his death. He was a son of Edward the Elder and half-brother of Æthelstan. Æthelstan died on 27 October 939, and Edmund succeeded him as king.

Edmund came to the throne as the son of Edward the Elder,[2] grandson of Alfred the Great, great-grandson of Æthelwulf of Wessex, great-great grandson of Egbert of Wessex and great-great-great grandson of Ealhmund of Kent. Shortly after his proclamation as king, he had to face several military threats. King Olaf III Guthfrithson conquered Northumbria and invaded the Midlands; when Olaf died in 942, Edmund reconquered the Midlands.[2] In 943, Edmund became the god-father of King Olaf of York. In 944, Edmund was successful in reconquering Northumbria.[3] In the same year, his ally Olaf of York lost his throne and left for Dublin in Ireland. Olaf became the king of Dublin as Amlaíb Cuarán and continued to be allied to his god-father. In 945, Edmund conquered Strathclyde but ceded the territory to King Malcolm I of Scotland in exchange for a treaty of mutual military support.[3] Edmund thus established a policy of safe borders and peaceful relationships with Scotland. During his reign, the revival of monasteries in England began.

One of Edmund's last political movements of which there is some knowledge is his role in the restoration of Louis IV of France to the throne. Louis, son of Charles the Simple and Edmund's half-sister Eadgifu, had resided at the West-Saxon court for some time until 936, when he returned to be crowned King of France. In the summer of 945, he was captured by the Norsemen of Rouen and subsequently released to Duke Hugh the Great, who held him in custody. The chronicler Richerus claims that Eadgifu wrote letters both to Edmund and to Otto I, Holy Roman Emperor in which she requested support for her son. Edmund responded to her plea by sending angry threats to Hugh, who brushed them aside.[4] Flodoard's Annales, one of Richerus' sources, report: 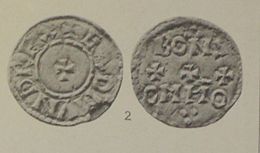 On 26 May 946, Edmund was murdered by Leofa, an exiled thief, while attending St Augustine's Day mass in Pucklechurch (South Gloucestershire).[7] John of Worcester and William of Malmesbury add some lively detail by suggesting that Edmund had been feasting with his nobles, when he spotted Leofa in the crowd. He attacked the intruder in person, but in the event, Leofa killed him. Leofa was killed on the spot by those present.[8] A recent article re-examines Edmund's death and dismisses the later chronicle accounts as fiction. It suggests the king was the victim of a political assassination.[9]

Edmund was succeeded as king by his brother Eadred, king from 946 until 955. Edmund's sons later ruled England as: