Edmund Ironside, or War Hath Made All Friends is an anonymous Elizabethan play that depicts the life of Edmund II of England. At least three critics have suggested that it is an early work by William Shakespeare. 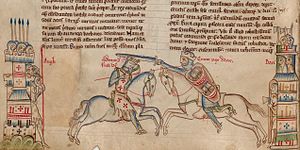 Ironside battles Canute, this illustrates the actual history the play is based on.

from Act I, scene i of Edmund Ironside. "Countrymen: Where is the king, that he may right our wrong? Canutus: The king is here; who is it calls the king? I am your king. Speak, gentle countrymen, what lawless hand hath done you injury?"

The play was never published in its own era; the unique copy of the text was preserved in MS. Egerton 1994, an important collection of play manuscripts now in the collection of the British Library.[1]

E.B. Everitt, Eric Sams, and Peter Ackroyd have argued that this play is perhaps Shakespeare's first drama. According to Sams, Edmund Ironside "contains some 260 words or usages which on the evidence of the Oxford English Dictionary were first used by Shakespeare himself.... Further, it exhibits 635 instances of Shakespeare's rare words including some 300 of the rarest."[2] Sams dates the play to 1587, noting that the play's presentation after that period until the death of Elizabeth I would have been illegal because of an edict that was passed that would have applied to a scene featuring a brawl between two archbishops. He further argues that the play's strong similarities in both line and plot to Titus Andronicus, and the latter's plays high number of mentions of the Roman setting may indicate that Titus is something of a rewriting of Edmund Ironside. His appendix notes correlations of images and ideas that are found only in Shakespeare's plays and not from any known playwright of the era, such as serpents stinging via their tongues and reporting of Judas Iscariot saying "all hail," which is non-Biblical, but also found in such plays as Henry VI, Part 3.

Edmund Ironside tells the story of a battle between two men who both want to be king of England: Edmund Ironside, who is a native, and noble, and Canutus, who is a Danish prince, and treacherous. A third important figure is Edricus, who is duplicitous, plays each side against the other, and who also wants the crown. Edricus occasionally finds himself alone onstage and boasts about his villainy in the manner of Shakespeare’s Richard III. Canutus is concerned that the native English population is rebelling against him in support of Ironside.

Stitch, brother to Edricus, is a cobbler, and wants to join the ranks his brother’s supporters. Their mother discloses tha Edricus was in fact born the bastard child of a soldier she once met. Edricus calls her a witch, and says that Stitch can enter his service, but first he must banish their parents from town. Stitch does this.

Canutus, angry that two of his supporters have deserted him on the day of his wedding to Southampton's daughter, Egina, decides to get revenge on the defectors by cutting of the hands and noses of their sons. Stitch gets an axe and cuts off the hands of the two boys. News arrives that Ironside has had a victory against Canutus' troops in the north.

Edricus attempts to frighten Ironside’s men by showing them a severed head and declaring it to Ironside’s. Then Ironside reappears, and in a battle Canutus is again driven back, and Ironside praises his men for the victory.

Canutus rails against his troops and supporters, calling them cowards. After this, Edricus writes to Ironside, asking forgivenes. He then exchanges clothing with Stitch.

Stitch, now dressed in aristocratic clothing, has a scene where he play-acts the part, and is a Falstafian comic tyrant.

Ironside reads the letter written by Edricus, and delivered by the disguised Edricus. In the letter Edricus claims that he defected because of rumors that Ironside was hunting for him, and he begs for mercy. Ironside is skeptical, and then recognizes Edricus beneath his disguise. Edricus explains that he planned to reveal himself and side with Ironside, or else exile himself. Edricus also claims to have information regarding Canutus' military plans. Ironside is trusting and announces that he will give Edricus a military command. In an aside, Edricus admires the success of his own dissimulation.

Meanwhile, as the Danes are ravaging the country, Emma, the stepmother of Ironside, says goodbye to her two young sons Alfred and Edward, who are about to embark and find safety with her brother, Duke Richard the Fearless of Normandy.

Canutus receives a letter from Edricus describing his insinuation into Ironside's confidences. Canutus exhaults in this, and his soldiers look forward to battle. The drums sound.

Ironside is cursing Edricus, when Edricus enters limping and with his hand wrapped in a scarf, claiming that he had a plan to support Ironside, if only Ironside had not retreated. Edricus points to his “injuries”. Ironside is persuaded and apologizes. Alone Edricus gloats.

Ironside and Canutus meet, each claiming to be king. Canutus, uses his knowledge of the law to argue his point. Ironside, angry, argues in return. They then draw swords, and a battle begins. Edricus has an idea to resolve the issue. He suggest that they either split the kingdom or that Canutus and Ironside fight one-on-one. The idea is accepted and the fight between the two men begins. Ironside seems to be winning, and Canutus yields, offering his hand to Ironside, who receives it honorably. Ironside wants the Danes to select which side, east or west, of England they want. Canutus and Ironside leave to go celebrate. Edricus, in an aside, speaks the last words of the play: “By heaven I'll be revenged on both of you.”[3]