From Infogalactic: the planetary knowledge core
Jump to: navigation, search
Not to be confused with Edmund Kean. 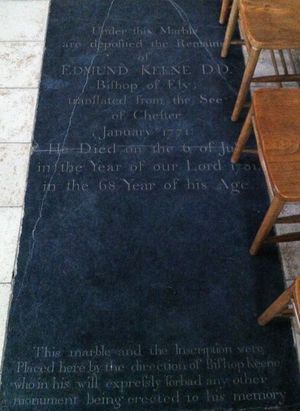 Edmund Keene (1714–1781) was an English churchman and academic, Master of Peterhouse, Cambridge, Bishop of Chester and Bishop of Ely.

He was the third but second surviving son of Charles Keene, and younger brother of Sir Benjamin Keene, and was born at King's Lynn, Norfolk. Through the influence of Sir Robert Walpole, friend of the family, he was educated at Charterhouse School, and was admitted to Caius College, Cambridge, in 1730.[1] He graduated B.A. in January 1734, and M.A. in 1737, having been incorporated at Oxford on 14 July 1735. From Michaelmas 1730 to Lady day 1734 he was scholar of Caius, and from Michaelmas 1736 to the same date in 1739 he was one of its junior fellows. In August 1739 he became a fellow of Peterhouse, Cambridge, and on 31 December 1748 was promoted to be master of the college.

For the two academic years ending November 1751 he was a reforming vice-chancellor of the university; a code of orders and regulations, proposed to the university senate on 11 May 1750, subsequently became law, and provoked an Occasional Letter to Dr. Keene, and other pamphlets. Having been ordained deacon on 18 July 1736, he held from 1740 to 1770 the rectory of Stanhope in County Durham. He made improvements to the house and gardens, and enlarged. On 22 March 1752 he was consecrated in the chapel of Ely House as bishop of Chester, but he did not resign the mastership of his college until 1754. While at Chester he rebuilt the episcopal palace; George Grenville, in December 1764, proposed that he should accept a transfer to the archiepiscopal see of Armagh, but Keene held out for the diocese of Ely.

On 22 January 1771 he was confirmed as bishop of Ely. He obtained in 1772 an act of parliament for alienating from the see the ancient bishop's palace in Holborn, and for purchasing the freehold of a house in Dover Street, Piccadilly, London; the house on that site was built by him about 1776.[2] He also rebuilt most of the palace at Ely, and furnished a gallery of portraits of its bishops from the Reformation. Many of Keene's appointments to livings did him credit, and where there was no resident incumbent he reserved to himself the right of appointing to the curacies, but he did not escape hostile criticism, and the epigrams of Thomas Gray were especially severe. He died at Ely House, Dover Street, London, on 6 July 1781 and at his own desire was buried in West's Chapel, Ely Cathedral, with a short epitaph written by himself.

Keene was select preacher at Whitehall Chapel in 1738, and published five sermons. He was the author of a translation of the first book of Theocritus, 'by a Gentleman,' which is inserted in John Whalley's Poems (1745), pp. 133–49. The original edition of Bentham's Ely was dedicated to him, and to it was prefixed a plate of his arms.

He married in May 1753 Mary, only daughter and heiress of Lancelot Andrews of Edmonton, formerly a linen-draper in Cheapside, and with her received a large fortune. She died on 24 March 1771, aged 48. and was buried in the south side of the choir of Ely Cathedral, Their son, Benjamin Keene, twice M.P. for Cambridge, married in 1780 Mary, only daughter of George Ruck of Swyncombe, Oxford (their descendants, including Admiral William George Elmhirst Ruck-Keene, all bore the name of Ruck-Keene).