From Infogalactic: the planetary knowledge core
(Redirected from Edor)
Jump to: navigation, search 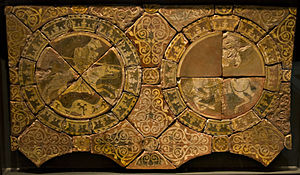 Richard I and Saladin in the British Museum tiles

Chertsey Abbey, dedicated to St Peter, was a Benedictine monastery located at Chertsey in the English county of Surrey.[1][2]

Originally founded by Saint Erkenwald, later Bishop of London, in 666 AD and he became the first abbot. Most of north-west Surrey was granted to the abbey by King Frithuwald of Surrey. Dark Age saints buried here include Saint Beocca, a Dark Ages Catholic Saint from Anglo-Saxon England buried here around 870 AD, and ninth century Saint Edor of Chertsey.

In the 9th century it was sacked by the Danes and refounded from Abingdon Abbey by King Edgar of England in 964. In the eleventh century the monks engineered the Abbey River as an offshoot of the River Thames to supply power to the abbey's watermill. In late medieval times, the Abbey became famous as the burial place of King Henry VI (whose body was later transferred to St George's Chapel, Windsor). The abbey was dissolved by the commissioners of King Henry VIII in 1537, but the community moved to Bisham.

The site was given to Sir William Fitzwilliam and now only slight traces remain amongst later buildings, although the abbey is remembered in many local names (for example: Abbey River, Monk's Walk, Abbey Fields). Some very fine medieval tiles from the abbey, some depicting the legend of Tristan and Iseult, may be seen in the British Museum.[3] From the ruins of the abbey, individual letter tiles dating to the second half of the 13th century were recovered.[4] They were assembled to form religious inscription texts on the floor and can be considered a forerunner of movable type printing.[5]

One of the Abbey's bells, cast by a Wokingham foundry circa 1380 and weighing just over half a ton is still in use as the 5th of the ring of eight at St Peter's church, Chertsey, and is one of the oldest bells in current use in Surrey.

A medieval stained glass panel with the abbey's coat of arms is displayed in the Burrell Collection near Glasgow, and the two crossed keys (of Saint Peter) from the arms are also in the official Banner of Arms of Surrey County Council. Some illuminated manuscripts from the abbey survive in various collections. The Chertsey Beviary, c. 1300, is in the Bodleian Library in Oxford (Bodley Ms Lat. liturg. d. 42).

Later history of the site

After Sir William Fitzwilliam, Chertsey Abby was owned Dr John Hammond (c. 1555–1617), physician to the royal household under James I, who purchased the site of Chertsey Abbey in Surrey in 1602. Dr.Hammond's son, Lt.Col.Thomas Hammond of Cromwell's New Model Army, was named as a Commissioner at the High Court of Justice for the trial of Charles I, and attending no fewer than fourteen of its sittings, he did not sign the death warrant.

In the mid-19th century the site of the abbey was excavated under the supervision of the architect and archaeologist Samuel Angell, who published an account of the investigations, accompanied by a ground plan of the abbey church, in 1862.[6]