Edward Franklin Albee III (/ˈɔːlbiː/ AWL-bee; born March 12, 1928) is an American playwright known for works such as The Zoo Story (1958), The Sandbox (1959), and Who's Afraid of Virginia Woolf? (1962). His works are often considered as well-crafted, realistic examinations of the modern condition. His early works reflect a mastery and Americanization of the Theatre of the Absurd that found its peak in works by European playwrights such as Samuel Beckett, Eugène Ionesco, and Jean Genet. Younger American playwrights, such as Paula Vogel, credit Albee's daring mix of theatricality and biting dialogue with helping to reinvent the post-war American theatre in the early 1960s. Albee continues to experiment in works such as The Goat, or Who Is Sylvia? (2002).

According to Magill's Survey of American Literature (2007), Edward Albee was born somewhere in Virginia (one popular belief is that he was born in Washington, D.C.). He was adopted two weeks later and taken to Larchmont, New York in Westchester County, where he grew up. Albee's adoptive father, Reed A. Albee, the wealthy son of vaudeville magnate Edward Franklin Albee II, owned several theaters. Here the young Edward first gained familiarity with the theatre. His adoptive mother, Reed's third wife, Frances (Cotter), tried to raise Albee to fit into their social circles. Albee attended the Clinton High School, then the Lawrenceville School in New Jersey, from which he was expelled. He then was sent to Valley Forge Military Academy in Wayne, Pennsylvania, where he was dismissed in less than a year. He enrolled at The Choate School (now Choate Rosemary Hall) in Wallingford, Connecticut, graduating in 1946. His formal education continued at Trinity College in Hartford, Connecticut, where he was expelled in 1947 for skipping classes and refusing to attend compulsory chapel.

Albee left home for good when he was in his late teens. In a later interview, he said: "I never felt comfortable with the adoptive parents. I don't think they knew how to be parents. I probably didn't know how to be a son, either."[1] More recently, he told interviewer Charlie Rose that he was "thrown out" because his parents wanted him to become a "corporate thug" and did not approve of his aspirations to become a writer.[2]

Albee moved into New York's Greenwich Village, where he supported himself with odd jobs while learning to write plays. His first play, The Zoo Story, was first staged in Berlin. The less than diligent student later dedicated much of his time to promoting American university theatre. He currently is a distinguished professor at the University of Houston, where he teaches an exclusive playwriting course. His plays are published by Dramatists Play Service[3] and Samuel French, Inc.. 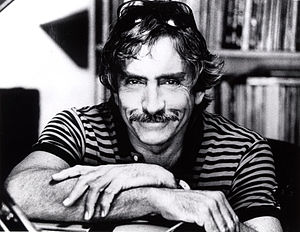 Albee is openly gay and states that he first knew he was gay at age 12 and a half.[4] He has insisted, however, that he does not want to be known as a "gay writer", stating in his acceptance speech for the 2011 Lambda Literary Foundation's Pioneer Award for Lifetime Achievement: "A writer who happens to be gay or lesbian must be able to transcend self. I am not a gay writer. I am a writer who happens to be gay."[5]

Albee's longtime partner, Jonathan Thomas, a sculptor, died on May 2, 2005, from bladder cancer. 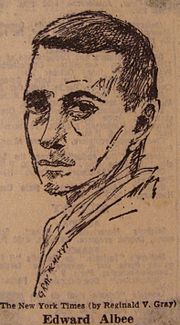 Edward Albee by Irish artist Reginald Gray (The New York Times, 1966), inspired by a photograph taken in 1962 from Bettmann/Corbis.

A member of the Dramatists Guild Council, Albee has received three Pulitzer Prizes for drama—for A Delicate Balance (1967), Seascape (1975), and Three Tall Women (1994). His play Who's Afraid of Virginia Woolf was selected for the 1963 Pulitzer Prize by the award's drama jury, but was overruled by the advisory committee, which elected not to give a drama award at all. Albee was elected a Fellow of the American Academy of Arts and Sciences in 1972.[6] In 1985, Albee was inducted into the American Theatre Hall of Fame.[7] In 1999, Albee received the PEN/Laura Pels International Foundation for Theater Award as a Master American Dramatist. He received a Special Tony Award for Lifetime Achievement (2005); the Gold Medal in Drama from the American Academy and Institute of Arts and Letters (1980); as well as the Kennedy Center Honors and the National Medal of Arts (both in 1996). In 2009 Albee received honorary degree a.k.a. "Doctor Honoris Causa" by the Bulgarian National Academy of Theater and Film Arts (NATFA), a member of the Global Alliance of Theater Schools.

Albee is the President of the Edward F. Albee Foundation, Inc., which maintains the William Flanagan Memorial Creative Persons Center, a writers and artists colony in Montauk, New York.

In 2008, in celebration of Albee's eightieth birthday, a number of his plays were mounted in distinguished Off Broadway venues, including the historic Cherry Lane Theatre. The playwright directed two of his one-acts, The American Dream and The Sandbox, there. These were first produced at the theater in 1961 and 1962, respectively.

The Edward F. Albee Foundation was founded in 1967 by Edward Albee, after proceeds from his play Who's Afraid of Virginia Woolf? proved abundant. The foundation had maintained the William Flanagan Memorial Creative Persons Center (better known as "The Barn") in Montauk, on Long Island in New York, as a residence for writers and visual artists. The mission of the foundation is to serve writers and visual artists from all walks of life, by providing time and space in which to work without disturbance. The only criteria for selection are talent and need, and the foundation invites any and all artists to apply.

The Pulitzer Prize committee for the Best Play in 1963 recommended Who's Afraid of Virginia Woolf?, but the Pulitzer board, which has sole discretion in awarding the prize, rejected the recommendation, due to the play's perceived vulgarity, and no award was given that year.[11]