Edward White Benson was born at Lombard Street in Highgate, Birmingham on 14 July 1829, the son of Birmingham chemical manufacturer Edward White Benson Sr. (26 August 1802 - 7 February 1843) and his wife Harriet Baker Benson (13 June 1805 - 29 May 1850).[1] He was educated at King Edward's School, Birmingham and Trinity College, Cambridge, where he graduated BA (8th classic) in 1852.[2] At King Edward’s, Benson “manifested a deeply religious tone of mind and was fond of sermons”. [3]

Benson began his career as a schoolmaster at Rugby School in 1852, and was ordained deacon in 1852 and priest in 1857. In 1859 Benson was chosen by Prince Albert as the first Master (headmaster) of Wellington College, Berkshire, which had been built as the nation's memorial to the Duke of Wellington. Benson was largely responsible for establishing Wellington as a public school, closely modelled on Rugby School, rather than the military academy originally planned.[4]

In 1883 he was appointed Archbishop of Canterbury. While at Canterbury, to avoid the prosecution before a lay tribunal of Edward King, Bishop of Lincoln, under the Public Worship Regulation Act 1874 for six ritual offences he heard the case in his own archiepiscopal court which had been inactive since 1699. [6] In his judgement (often called "the Lincoln Judgement"), he found against the Bishop on two points, with a proviso as to a third that, when performing the manual acts during the prayer of consecration in the Holy Communion service, the priest must stand so that they can be seen by the people.[7]

Benson also tried to amalgamate the two Convocations and the new houses of laity into a single assembly. In 1896 it was established that they could 'unofficially' meet together.[8] In September of the same year, the papal apostolic letter Apostolicae curae was published and Benson had started to work on a reply before his sudden death of a heart attack while attending Sunday service in St. Deiniol's Church, Hawarden, Wales on 11 October 1896, while on a visit to former Prime Minister William Gladstone. Three days later his body was put on the train at Sandycroft station to be returned to London.[9] He was buried at Canterbury Cathedral, in a magnificent tomb located at the western end of the nave. The tomb is emblazoned with the epitaph Benson had chosen: “Miserere mei Deus Per crucem et passionem tuam libera me Christe” ("Have mercy on me O Christ our God, Through Thy Cross and Passion, deliver thou me").[10][11]

His devotion to Saint Cyprian bore posthumous fruit with the publication of Cyprian, his life, his times, his work the following year.[12]

Benson is best remembered for devising the Festival of Nine Lessons and Carols, an order first used in Truro Cathedral on Christmas Eve, 1880. Considerably revised by Eric Milner White for King's College Cambridge, this service is now used every Christmas around the world.[13]

Benson was the founder of the Church of England Purity Society,[14] an organization which later merged with the White Cross Army. Alfred Ryder served as a trustee of the organization.[15]

Benson told Henry James a simple, rather inexpert story he had heard about the ghosts of evil servants who tried to lure young children to their deaths. James recorded the hint in his Notebooks and eventually used it as the starting-point for his classic ghost story, The Turn of the Screw.[16] 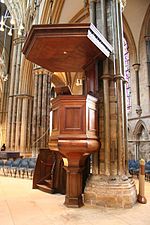 The hymn "God Is Working His Purpose Out" was written by Arthur C. Ainger as a tribute to Benson as both were Masters at Eton and Rugby respectively.[17]

In 1914, a boarding house at Wellington College was named after him. Benson House carries the emblem of a blue Tudor Rose, and is situated outside of the main College.[18]

In 2011, a book about Mary Benson characterized her husband as living "a life of relentless success."[19]

Benson married his distant cousin Mary (Minnie) Sidgwick, the sister of philosopher Henry. The couple had six children. Their fifth child was the novelist E. F. Benson, best remembered for his Mapp and Lucia novels. Another son was A. C. Benson, the author of the lyrics to Elgar's "Land of Hope and Glory" and master of Magdalene College, Cambridge. Their sixth and youngest child, Robert Hugh Benson, became a minister of the Church of England before converting to Roman Catholicism and writing many popular novels. Their daughter, Margaret Benson, was an artist, author, and amateur Egyptologist. None of the children married; and some appeared to suffer from mental illnesses, possibly bipolar disorder.[citation needed]

After the archbishop's death, his widow set up household with Lucy Tait, daughter of the previous Archbishop of Canterbury, Archibald Campbell Tait.[20] A full-length biography of her was published in 2011, casting light on the Bensons' domestic life.[21]

The Benson family was of Scandinavian origin with the name of Bjornsen. The Bensons "emerge into history" as an English family in 1348 when John Benson held a "toft" from the Abbey at Swinton-by-Masham.[23]

Arthur Christopher Benson, the Archbishop's son, wrote a genealogy of his family.[24] He found that "Old" Christopher Benson (born 1703) was the "real founder of the fortunes" of the Benson family having acquired a "good deal" of land. He also "established a large business."[25]

Archbishop Edward White Benson's grandfather was Captain White Benson, of the 6th Regiment of Foot. The Archbishop's seal and the Captain's coat of arms show their branch of the Benson family arms were blazoned: Argent, a quatrefoil between two trefoils slipped in bend sable, between four bendlets gules.[26]

The Archbishop's father was Edward White Benson (born in York in 1802, died at Birmingham Heath in 1843). He was a Fellow of the Royal Botanical Society of Edinburgh and the author of books on education and religion.[26] He was also an inventor whose inventions made "considerable fortunes" for others, but not for him.[27]