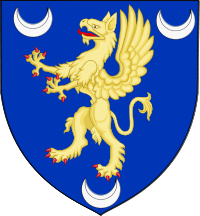 Arms of Bligh: Azure, a griffin segreant or armed and langued gules between three crescents argent[1]

The eldest son of John Bligh, 1st Earl of Darnley and Lady Theodosia Hyde, Baroness Clifton, he was educated at Westminster and at Geneva. He succeeded his mother as Baron Clifton in 1722 and, in 1728, his father as Earl of Darnley.

Lord Darnley was a Grand Master of Freemasons (1737 to 1738), elected a Fellow of the Royal Society (in 1737) and in 1742 was appointed a Lord of the Bedchamber to the Prince of Wales: a position that he held until his death. He was one of the Whigs who, under the auspices of William Pulteney, 1st Earl of Bath, opposed Robert Walpole's office. Although he never married, he is reputed to have been the lover of the popular Irish actress Margaret Woffington.