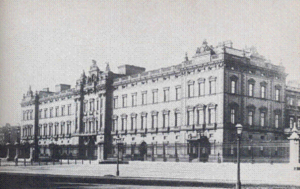 Buckingham Palace as completed by Blore in 1850. It was later refaced and altered by Sir Aston Webb in 1913. 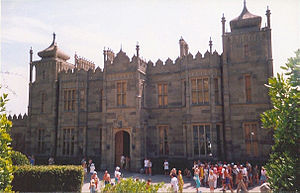 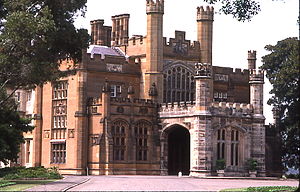 He was born in Derby, the son of the antiquarian writer Thomas Blore. [1]

Blore's background was in antiquarian draughtsmanship rather than architecture, in which he had no formal training. Charles Locke Eastlake, writing in 1872, believed that he had been apprenticed to an engraver,[2] but other sources dispute this.[3] He illustrated his father's History of Rutland (1811), and over the next few years he made the drawings of York and Peterborough for John Britton's English Cathedrals, and drew architectural subjects for various county histories.[1] In around 1822 Blore supplied the illustrations to Thomas Frognall Dibdin's Aedes Althorpianæ.[2] In 1823 he toured Northern England, making drawings for a work called the Monumental Remains of Noble and Eminent Persons. It was issued in parts with text by the Rev. Philip Bliss, and completed in 1826. Blore engraved many of the plates himself.[4]

In 1826, he was appointed surveyor to Westminster Abbey.[5] In 1827 he was engaged to furnish plans for the chancel fittings of Peterborough. Shortly afterwards he was employed to restore Lambeth Palace, then in a state of near ruin. His work there included the construction of a fire-proof room for the preservation of manuscripts and archives.[6]

Eastlake praised Blore's careful detail in his work at Westminster Abbey, adding "this was, in short, his great forte. He had studied and drawn detail so long and zealously that its design came quite naturally to him, and in this respect he was incomparably superior to his contemporaries".[7]

Blore is most notable for his completion of John Nash's design of Buckingham Palace, following Nash's dismissal. He completed the palace in a style similar to but plainer than that intended by Nash. In 1847, Blore returned to the palace and designed the great facade facing The Mall thus enclosing the central quadrangle. He also worked St James' Palace in London, and a large number of other designs in both England and Scotland, including restoring Salisbury Tower at Windsor Castle.

Blore was a personal friend of Sir Walter Scott, having been introduced by Daniel Terry,[3] and like Scott was interested in the baronial architecture of Scottish castles. This led to Prince Vorontsov's suggestion to design his extensive Vorontsov's Palace in Alupka, Crimea (now Russian Federation). The Alupka palace was built between 1828 and 1846, in a mixture of styles ranging from Gothic Revival to Moorish Revival. The palace's guidebook describes the building as "Blore's tribute to Muslim architecture". The structure features two facades, contrasting "the starkness of Scottish Baronial on its landward side with Arabian fantasy facing the sea".[8]

As a recognised establishment architect, Blore was involved in many projects related to the British Empire; this included Government House in Sydney, Australia, which he designed in 1834 in the form of a Gothic castle. Such designs were unusual and display a more adventurous side to Blore's work than can be seen from his work in London. His East front, the public face, of Buckingham Palace was criticised from the moment of its completion as banal street architecture, a view shared by King George V who had the facade redesigned in 1913. He was elected Fellow of the Royal Society in 1841.

Blore died in London on 4 September 1879,[1] and was buried in Highgate Cemetery (West), Highgate, London.

The architects Philip Charles Hardwick and Frederick Marrable and Henry Clutton were his pupils. William Mason worked for him before going to Australia and New Zealand.