Boyle was born in Kensington, London, the eldest son of Sir Edward Boyle, 2nd Baronet, and succeeded to his father's baronetcy in 1945.[1] He was educated at Eton and graduated from Christ Church, Oxford, in 1949 with a third-class BA (later converted to an MA) in history.[2] From 1942 to 1945, he was a temporary junior administration officer at the Foreign Office. He worked at Bletchley Park in intelligence.[3] 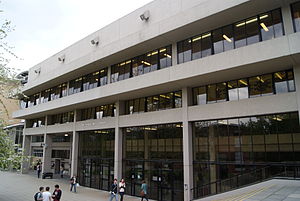 The Edward Boyle library at the University of Leeds was named in his honour.

Boyle was appointed Vice-Chancellor of the University of Leeds in 1970. He was a Trustee of the British Museum from 1970 to 1981 and Chairman of the Committee of Vice-Chancellors and Principals of UK Universities from 1977 to 1979.

In 1977 he had been due to deliver the Reith Lectures for the BBC. Despite 2 years preparation time, he withdrew with 3 months notice.[4]

Boyle died from cancer in Leeds on 28 September 1981, aged 58. He was unmarried and childless and whilst his life peerage became extinct at his death, his baronetcy passed to his brother, Richard.[2]

On his retirement from parliament in 1970, Boyle was awarded a life peerage as Baron Boyle of Handsworth, of Salehurst in the County of Sussex.

Boyle was awarded the honorary degree of Doctor of Laws (LLD) by the following universities:[5]

Boyle also received an Honorary Doctorate from Heriot-Watt University in 1977.[7]

Flanders and Swann satirically cited "Edward Boyle's Law" : The greater the external pressure, the greater the volume of hot air.