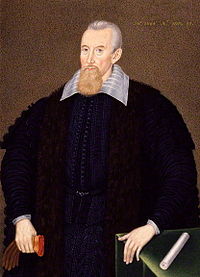 Kinloss was the second son of Edward Bruce of Blairhall and Alison Reid. He served as a Lord of Session from 1597 to 1603 and was created Lord Kinloss in 1602, with remainder to his heirs and assigns whatsoever. He played an important role in King James VI's succession to the throne of England, and accompanied the king to England on his accession in 1603. The same year Kinloss became an English subject,was admitted to the Privy Council and appointed Master of the Rolls for life. In 1604 he was made Lord Bruce of Kinloss, with remainder to his heirs male, and in 1608 he was created Lord Bruce of Kinloss, with remainder to any of his heirs. Lord Kinloss married Magdalene Clerk, daughter of Alexander Clerk. He died in London in January 1611 and was succeeded in his three titles by his eldest son Edward.