Edward Charles "Shy" Meyer (born December 11, 1928) was a United States Army general and the 29th Chief of Staff of the U.S. Army.

Meyer was born in St. Marys, Pennsylvania on December 11, 1928. Upon graduation from the United States Military Academy in 1951 he was commissioned a second lieutenant and attended the U.S. Army Infantry School at Fort Benning. His first assignment was as a platoon leader in Company C, 25th Armored Infantry Battalion in the Korean War from 1951 to 1952. After promotion to first lieutenant in July 1952 he served as a platoon leader, company commander, and battalion staff officer with the 2d Battalion, 24th Infantry Regiment, also in Korea, until 1953. He next served in the 1st Officer Candidate Regiment, Infantry School from 1953 to 1954, afterwards serving as aide to the assistant commandant of the Infantry School, and then as an instructor in operations until 1957. During his time there he was promoted to temporary captain, in July 1956. He next graduated from the infantry officers advanced and basic airborne courses in 1957, continuing on to command Headquarters and Headquarters Company, 1st Airborne Battle Group, 501st Infantry, from 1957 to 1958, followed by promotion to permanent captain in February, 1958 and command of the battle group's Company D from 1958 to 1959. After company command he attended the Command and General Staff College at Fort Leavenworth, graduating in 1960, and being promoted to temporary major in October of that year. He was next manpower control officer in the Office of the Assistant Chief of Staff, G–1, United States Army, Europe (Rear) from 1960 to 1961, and assistant executive and aide to the chief of staff at Supreme Headquarters, Allied Powers Europe from 1961 to 1963. He graduated from the Armed Forces Staff College in 1964, receiving a promotion to temporary lieutenant colonel in May 1964 and permanent major in June 1965. After graduation he served in the Coordination Division of the Office of the Chief of Staff until 1965. 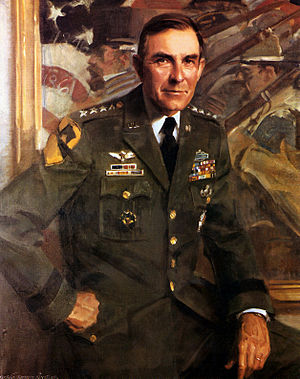 He again returned to combat as deputy commander of the 3d Brigade, 1st Cavalry Division (Airmobile) in Vietnam, later taking command of the 2d Battalion, 5th Cavalry from 1965 to 1966. Returning stateside, he graduated from the National War College in 1967, then served in the Plans and Operations Division, Office of the Joint Chiefs of Staff until 1969, promoted to temporary colonel in November 1968. He returned to Vietnam to command the 2d Brigade, 1st Cavalry Division (Airmobile), and then served as division chief of staff, leaving Vietnam in 1970.

Meyer was chosen as a federal executive fellow at the Brookings Institution from 1970 to 1971. He was promoted to temporary brigadier general in August 1971 and permanent lieutenant colonel in June 1972. After promotion to flag rank he served as assistant division commander (support) of the 82d Airborne Division from 1971 to 1972, followed by assignment as deputy commandant of the Army War College from 1972 to 1973. He was next deputy chief of staff for operations, United States Army, Europe, and Seventh Army until 1974, being promoted to temporary major general in August 1973. He was chosen as commanding general of the 3rd Infantry Division, United States Army, Europe from 1974 to 1975.

Senior Commands and Chief of Staff

He moved to the Pentagon in 1975 as assistant deputy chief and deputy chief of staff for operations and plans, United States Army, and remained in that position until 1979. He was promoted to permanent colonel in March 1976, and temporary lieutenant general in October 1976, and general in June 1979, whereupon he was selected as Chief of Staff of the United States Army, a post he filled from June 22, 1979 to June 21, 1983.[1] During his tenure he prosecuted an Army-wide modernization program with emphasis on quality over quantity, stressed the need for a long-term investment in land force materiel, and launched a unit-manning system to reduce personnel turbulence and to enhance readiness. Meyer retired from active service in June 1983.

Meyer married Carol McCunniff in 1954. He had five children. Three sons, Tom, Tim, and Doug; and two daughters, Nancy and Stuart. His daughter, Nancy, is an actress who is married to Michael Cartellone, the drummer for the band Lynrd Skynyrd. His son, Tom, is a political cartoonist who is married to Gretchen Nash and has a daughter named Mia.

Howard Hughes was involved in a near-fatal aircraft accident on July 7, 1946, while performing the first flight of the prototype U.S. Army Air Forces reconnaissance aircraft, the XF-11, near Hughes airfield at Culver City, California. When the XF-11 finally came to a halt after destroying three houses, the fuel tanks exploded, setting fire to the aircraft and a nearby home at 808 North Whittier Drive, owned by Edward C. Meyer.