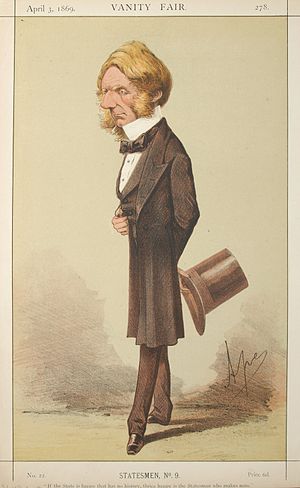 Edward Cardwell, 1st Viscount Cardwell PC, PC (Ire), FRS (24 July 1813 – 15 February 1886) was a prominent British politician in the Peelite and Liberal parties during the middle of the 19th century. He is best remembered for his tenure as Secretary of State for War between 1868 and 1874 and the introduction of the Cardwell Reforms.

Cardwell was the son of John Henry Cardwell, of Liverpool, a merchant, and Elizabeth, daughter of Richard Birley. He was educated at Winchester and Balliol College, Oxford, from where he took a degree in 1835. He was called to the bar, Inner Temple, in 1838.[1]

Cardwell was elected Member of Parliament for Clitheroe in Lancashire in 1842.[1] He became a follower and confidant of Sir Robert Peel, the Prime Minister, and held his first office under him as Financial Secretary to the Treasury between 1845 and 1846.[1] When Peel split the Conservative Party in 1846 over the issue of repealing the Corn Laws, Cardwell followed Peel, and became a member of the Peelite faction. When the Peelites came to power in 1852, Cardwell was sworn of the Privy Council[2] and made President of the Board of Trade by Lord Aberdeen, a position he held until 1855.[1] In 1854 he passed the Cardwell Railway Act which stopped the cut-throat competition between Railway Companies which was acting to their and the railusers' disadvantage.[citation needed]

During these years, Cardwell moved from seat to seat in Parliament. In 1847, he was elected as MP for Liverpool.[1][3] In 1852, he lost elections for Liverpool and for Ayrshire, but won a seat at Oxford. In 1857, he was defeated for the Oxford seat, but a second election for the seat was held shortly after, which he won (beating William Makepeace Thackeray).[1][4] The Peelite faction disintegrated in the late 1850s, and Cardwell officially became a Liberal in 1859,[citation needed] joining Lord Palmerston's cabinet as Chief Secretary for Ireland.[1] Unhappy in that position,[citation needed] he moved two years later to another cabinet post, Chancellor of the Duchy of Lancaster.[5] A second move within the cabinet came in 1864, when Cardwell became the Secretary of State for the Colonies,[6] a position he kept until the Liberals were turned out of office in 1866.

When the Liberals returned to power under William Ewart Gladstone in the 1868 election, Cardwell reached the peak of his career, as Gladstone's Secretary of State for War.[7] During his six years in the post, in what became known as "Cardwell reforms", Cardwell reorganised the British army, introduced professional standards for officers (including advancement by merit rather than purchase), and formed a home reserve force.[8] After Gladstone's defeat in the 1874 election, Cardwell was raised to the peerage as Viscount Cardwell, of Ellerbeck in the County Palatine of Lancaster.[9] His ennoblement ended his active political career.

Liberal Prime Minister William E. Gladstone paid little attention to military affairs but he was keen on efficiency. In 1870 he pushed through Parliament major changes in Army organisation. Germany's stunning triumph over France proved that the Prussian system of professional soldiers with up-to-date weapons was far superior to the traditional system of gentlemen-soldiers that Britain used.[10] The reforms were not radical—they had been brewing for years and Gladstone seized the moment to enact them. The goal was to centralise the power of the War Office, abolish purchase of officers' commissions, and to create reserve forces stationed in Britain by establishing short terms of service for enlisted men.[11]

Cardwell as Secretary of State for War (1868–1874) designed the reforms that Gladstone supported in the name of efficiency and democracy. In 1868 he abolished flogging, raising the private soldier status to more like an honourable career. In 1870 Cardwell abolished "bounty money" for recruits, discharged known bad characters from the ranks. He pulled 20,000 soldiers out of self-governing colonies like Canada, which learned they had to help defend themselves.

The most radical change, and one that required Gladstone's political muscle, was to abolish the system of officers obtaining commissions and promotions by purchase, rather than by merit. The system meant that the rich landholding families controlled all the middle and senior ranks in the army. Promotion depended on the family's wealth, not the officer's talents, and the middle class was shut out almost completely. British officers were expected to be gentlemen and sportsmen; there was no problem if they were entirely wanting in military knowledge or leadership skills. From the Tory perspective it was essential to keep the officer corps the domain of gentlemen, and not a trade for professional experts. They warned the latter might menace the oligarchy and threaten a military coup; they preferred an inefficient army to an authoritarian state. The rise of Bismarck's new Germany made this reactionary policy too dangerous for a great empire to risk.

The bill, which would have compensated current owners for their cash investments, passed Commons in 1871 but was blocked by the House of Lords. Gladstone then moved to drop the system without any reimbursements, forcing the Lords to backtrack and approve the original bill. Liberals rallied to Gladstone's anti-elitism, pointing to the case of Lord Cardigan (1797–1868), who spent £40,000 for his commission and proved utterly incompetent in the Crimean war, where he ordered the disastrous "Charge of the Light Brigade" in 1854.

Cardwell was not powerful enough to install a general staff system; that had to await the 20th century. He did rearrange the war department. He made the office of Secretary of State for War superior to the Army's commander in Chief; the commander was His Royal Highness The Duke of Cambridge, the Queen's first cousin, and an opponent of the reforms. The surveyor-general of the ordnance, and the financial secretary became key department heads reporting to the Secretary. The militia was reformed as well and integrated into the Army. The term of enlistment was reduced to 6 years, so there was more turnover and a larger pool of trained reservists. The territorial system of recruiting for regiments was standardised and adjusted to the current population. Cardwell reduced the Army budget yet increased the strength of the army by 25 battalions, 156 field guns, and abundant stores, while the reserves available for foreign service had been raised tenfold from 3,500 to 36,000 men.[12] 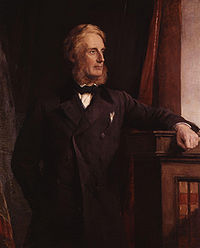 Lord Cardwell married Annie, daughter of Charles Stuart Parker, in 1838. They had two children, Margaret and Paul. He died in Torquay, Devon, in February 1886, aged 72. Lady Cardwell only survived him by a year and died in February 1887.[1] The town of Cardwell in Queensland, Australia, was named after Lord Cardwell, and the current branch of the Cardwells married into a Carinthian Austrian family.[13]