From Infogalactic: the planetary knowledge core
Jump to: navigation, search
This article is about the Elizabethan soldier and courtier. For other people of the same name, see Edward Denny. 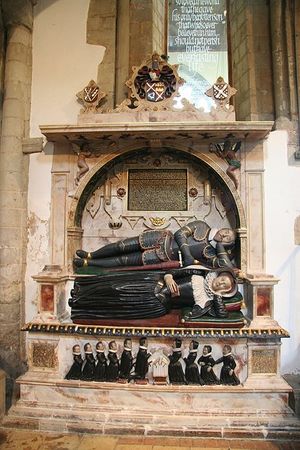 The monument to Sir Edward Denny and his wife Lady Margaret, with "weepers" depicting their seven sons and three daughters.

Sir Edward Denny (1547 – 12 February 1600), Knight Banneret of Bishop's Stortford, was a soldier, privateer and adventurer in the reign of Elizabeth I.

Denny was born in Cheshunt, Hertfordshire in 1547, the second surviving son of Sir Anthony Denny who was a Privy Councillor to Henry VIII and one of the Guardians of Edward VI. Orphaned in childhood, he inherited lands in Hertfordshire. After some minor appointments at court, in 1573 Edward Denny went to Ulster on a military expedition led by Walter Devereux, 1st Earl of Essex. Denny then took up privateering, capturing a Spanish ship in 1577 and a Flemish one in 1578. The same year saw him join a colonizing expedition led by Sir Humphrey Gilbert and Walter Raleigh; however, their ships were forced to turn for home by bad weather.

Denny and his cousin Raleigh were then sent to Ireland to help put down the Second Desmond Rebellion. Denny led a company at the infamous Siege of Smerwick, when 400 Spanish and Italian troops were beheaded by the English after surrendering. In 1581, he commanded another expedition to Ireland and returned with the head of Garret O’Toole, leader of one of the Irish clans. At court that year, he met Lady Margaret Edgcumbe, one of the queen’s maids of honour, and married her in 1583. They had seven sons and three daughters.

Children of Edward and Margaret Denny: 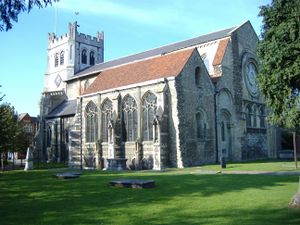 Denny first became Member of Parliament for Liskeard in Cornwall for the 1584 to 1585 parliament. He was granted lands at Tralee, confiscated from the Earl of Desmond; he both became High Sheriff of Kerry and was knighted in 1588. His estates in Ireland were a financial failure and in 1591 he returned to England to command a naval expedition to the Azores. It has not been established whether it was this Sir Edward Denny or his nephew and namesake who was elected Knight of the Shire for Westmorland in 1593, however it is certain that in 1597 he was returned to Parliament for the "rotten borough" of Tregony in Cornwall.[1]

The following year he returned to Ireland during the Nine Years' War, to find that the confiscated land he had been granted had been ransacked. Disgruntled by the lack of rewards for his service to the Crown, Denny allied himself to Robert Devereux, 2nd Earl of Essex. Late in 1599 or early in 1600, Denny "took a deadly sickness in his country’s service".[1] He died on 12 February 1600 at the age of 52; his tomb and monument are in Waltham Abbey Church in Essex. The monument is beside the high altar and depicts Denny lying on his side in a suit of armour, next to his wife; on a separate frieze below are depicted their ten children kneeling.[2] It carries the inscription;

Learn, curious reader, ere you pass,
What Sir Edward Denny was:
A courtier in the chamber, a soldier in the field;
Whose tongue could never flatter,
Whose heart could never yield.[3]

Sir Edward is interred in the family vault in the churchyard,[2] Lady Margaret Denny lived on until 1648 and is buried in St Michael's Church, Bishop's Stortford.