From Infogalactic: the planetary knowledge core
Jump to: navigation, search
For other uses, see Edward Fitzgerald.

Edward FitzGerald (31 March 1809 – 14 June 1883) was an English poet and writer, best known as the poet of the first and most famous English translation of The Rubaiyat of Omar Khayyam. The writing of his name as both FitzGerald and Fitzgerald is seen. The use here of FitzGerald conforms with that of his own publications, anthologies such as Quiller-Couch's Oxford Book of English Verse, and most reference books up until about the 1960s.

Edward FitzGerald was born Edward Purcell at Bredfield House in Bredfield, around 2 miles north of Woodbridge, Suffolk, England, in 1809. In 1818, his father, John Purcell, assumed the name and arms of his wife's family, the FitzGeralds.

This name change occurred shortly after FitzGerald's mother inherited her second fortune. She had previously inherited over half a million pounds from an aunt, but in 1818, her father died and left her considerably more than that. The FitzGeralds were one of the wealthiest families in England. Edward FitzGerald later commented that all of his relatives were mad; further, that he was insane as well, but was at least aware of the fact.[1]

In 1816, the family moved to France, and lived in St Germain as well as Paris, but in 1818, after the aforementioned death of his maternal grandfather, the family had to return to England. In 1821, Edward was sent to school at Bury St Edmunds. In 1826, he went to Trinity College, Cambridge.[2] He became acquainted with William Makepeace Thackeray and William Hepworth Thompson. Though he had many friends who were members of the Cambridge Apostles, most notably Alfred Tennyson, FitzGerald himself was never offered an invitation to this famous group. In 1830, FitzGerald left for Paris, but in 1831 was living in a farmhouse on the battlefield of Naseby.

Needing no employment, FitzGerald moved to his native Suffolk where he lived quietly, never leaving the county for more than a week or two while he resided there. Until 1835, the FitzGeralds lived in Wherstead; from that year until 1853 the poet resided in a cottage in the grounds of Boulge Hall, near Woodbridge to which his parents had moved. In 1860, he again moved with his family to Farlingay Hall, where they stayed until, in 1873, they moved to the town of Woodbridge; thereafter until his death, FitzGerald resided at his own house close by, called Little Grange. During most of this time, FitzGerald was preoccupied with flowers, music, and literature. Friends like Tennyson and Thackeray had surpassed him in the field of literature, and for a long time FitzGerald showed no intention of emulating their literary success. In 1851, he published his first book, Euphranor, a Platonic dialogue, born of memories of the old happy life in Cambridge. This was followed in 1852 by the publication of Polonius, a collection of "saws and modern instances," some of them his own, the rest borrowed from the less familiar English classics. FitzGerald began the study of Spanish poetry in 1850 at Elmsett, followed by Persian literature at the University of Oxford with Professor Edward Byles Cowell in 1853. He married Lucy, the daughter of the Quaker poet Bernard Barton in Chichester on 4 November 1856, following a death bed promise to Bernard made in 1849 to look after her. The marriage was evidently unhappy, for the couple separated after only a few months,[3] despite having known each other for many years, including collaborating on a book about her father's works in 1849.

In 1853, FitzGerald issued Six Dramas of Calderon, freely translated.[3] He now turned to Oriental studies, and in 1856 he anonymously published a version of the Sálamán and Absál of Jami in Miltonic verse. In March 1857, Cowell discovered a set of Persian quatrains by Omar Khayyám in the Asiatic Society library, Calcutta, and sent them to FitzGerald. At this time, the name with which he has been so closely identified first occurs in FitzGerald's correspondence—"Hafiz and Omar Khayyam ring like true metal." On 15 January 1859, a little anonymous pamphlet was published as The Rubaiyat of Omar Khayyam. In the world at large, and in the circle of FitzGerald's particular friends, the poem seems at first to have attracted no attention. The publisher allowed it to gravitate to the fourpenny or even (as he afterwards boasted) to the penny box on the bookstalls. 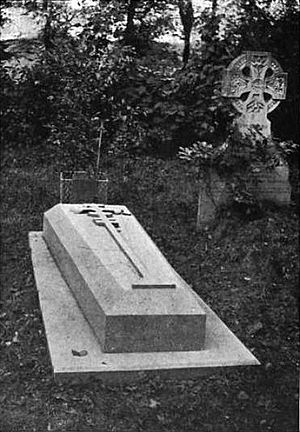 But in 1861, Rossetti discovered it, and Swinburne and Lord Houghton quickly followed. The Rubaiyat slowly became famous, but it was not until 1868 that FitzGerald was encouraged to print a second and greatly revised edition. He had produced in 1865 a version of the Agamemnon, and two more plays from Calderón. In 1880–1881, he privately issued translations of the two Oedipus tragedies; his last publication was Readings in Crabbe, 1882. He left in manuscript a version of Attar of Nishapur's Mantic-Uttair. This last translation FitzGerald called "A Bird's-Eye view of the Bird Parliament", whittling the Persian original (some 4500 lines) down to a much more manageable 1500 lines in English; some have called this translation a virtually unknown masterpiece.[4]

From 1861 onwards, FitzGerald's greatest interest had been in the sea. In June 1863 he bought a yacht, "The Scandal", and in 1867 he became part-owner of a herring-lugger, the "Meum and Tuum". For some years, till 1871, he spent his summers "knocking about somewhere outside of Lowestoft." In this way, and among his books and flowers, FitzGerald grew old. He died in his sleep in 1883, and was buried at Boulge. He was, in his own words, "an idle fellow, but one whose friendships were more like loves." In 1885 his fame was increased by Tennyson's dedication of his Tiresias to FitzGerald's memory, in some reminiscent verses to "Old Fitz."

Of FitzGerald as a man practically nothing was known until, in 1889, W. Aldis Wright, his close friend and literary executor, published his Letters and Literary Remains in three volumes. This was followed in 1895 by the Letters to Fanny Kemble. These letters reveal that FitzGerald was a witty, picturesque and sympathetic letterwriter.[5] One of the most unobtrusive authors who ever lived, FitzGerald has, nevertheless, by the force of his extraordinary individuality, gradually influenced the whole face of English belles-lettres, in particular as it was manifested between 1890 and 1900.[6]

FitzGerald's emotional life was complex. He was extremely close to many of his friends; amongst them was William Browne, who was sixteen when he met FitzGerald. Browne's tragically early death due to a horse riding accident was a major catastrophe for FitzGerald. Later, FitzGerald became similarly close to a fisherman named Joseph Fletcher, with whom he had bought the herring boat.[3]

As he grew older, FitzGerald grew more and more disenchanted with Christianity, and finally gave up attending church entirely.[7] This drew the attention of the local pastor, who decided to pay a visit to the self-absenting FitzGerald. Reportedly, FitzGerald informed the pastor that his decision to absent himself from church services was the fruit of long and hard meditation. When the pastor protested, FitzGerald showed him to the door, and said, "Sir, you might have conceived that a man does not come to my years of life without thinking much of these things. I believe I may say that I have reflected [on] them fully as much as yourself. You need not repeat this visit."[7]

Beginning in 1859, FitzGerald authorized four editions and had a fifth posthumous edition of his translation of the Rubáiyát of Omar Khayyám (Persian: رباعیات عمر خیام‎‎), of which three (the first, second, and fifth) differ significantly; the second and third are almost identical, as are the fourth and fifth. The first and fifth editions are almost equally reprinted[8][9] and equally often anthologized.[10]

A Book of Verses underneath the Bough,
A Jug of Wine, a Loaf of Bread—and Thou
Beside me singing in the Wilderness—
Oh, Wilderness were Paradise enow! 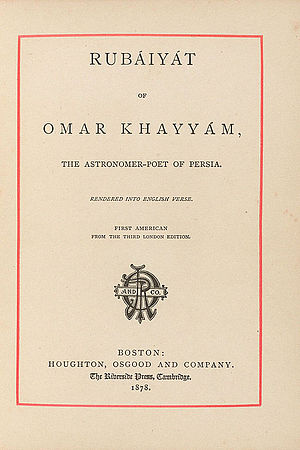 Title page from the first American edition of FitzGerald's translation, 1878

Stanza XI above, from the fifth edition, differs from the corresponding stanza in the first edition, wherein it reads: "Here with a Loaf of Bread beneath the bough/A Flask of Wine, a Book of Verse—and Thou". Other differences are discernible. Stanza XLIX is more well known in its incarnation in the first edition:

'Tis all a Chequer-board of Nights and Days
Where Destiny with Men for Pieces plays:
Hither and thither moves, and mates, and slays,
And one by one back in the Closet lays.

The fifth edition is less familiar: "But helpless Pieces of the Game He plays/Upon this Chequer-board of Nights and Days".

FitzGerald's translation of the Rubáiyát is notable for being a work to which allusions are both frequent and ubiquitous.[6] It remains popular, but enjoyed its greatest popularity for a century following its publication, wherein it formed part of the wider English literary canon.[6]

One indicator of the popular status of the Rubáiyát is that, of the 101 stanzas in the poem's fifth edition, the Oxford Dictionary of Quotations (2nd edition) quotes no less than 43 entire stanzas in full, in addition to many individual lines and couplets. Stanza LI, also well-known, runs:

The Moving Finger writes; and, having writ,
Moves on; nor all your Piety nor Wit
Shall lure it back to cancel half a Line,
Nor all your Tears wash out a Word of it.

Lines and phrases from the poem have been used as the titles of many literary works, amongst them Nevil Shute's The Chequer Board, James Michener's The Fires of Spring and Agatha Christie's The Moving Finger; Eugene O'Neill's Ah, Wilderness alludes to the Rubáiyát without being a direct quotation. Allusions to it are frequent in the short stories of O. Henry;[11] Saki's nom-de-plume makes reference to it. The popular 1925 song A Cup of Coffee, A Sandwich, and You, by Billy Rose and Al Dubin, makes reference to the first of the stanzas quoted above.

FitzGerald's translations were popular in the century of their publication, and since its publication humourists have used it for purposes of parody.[6]

"If you can prove to me that one miracle took place, I will believe he is a just God who damned us all because a woman ate an apple."

"Science unrolls a greater epic than the Iliad. The present day teems with new discoveries in Fact, which are greater, as regards the soul and prospect of men, than all the disquisitions and quiddities of the Schoolmen. A few fossil bones in clay and limestone have opened a greater vista back into time than the Indian imagination ventured upon for its gods. This vision of Time must not only wither the poet's hope of immortality, it is in itself more wonderful than all the conceptions of Dante and Milton."

"Leave well–even 'pretty well'–alone: that is what I learn as I get old."

"I am all for the short and merry life." Epitaph