Sir Edward George Clarke QC (15 February 1841 – 26 April 1931) was a British barrister and politician, considered one of the leading advocates of the late Victorian era and serving as Solicitor-General in the Conservative government of 1886–1892. His legal career included representing Oscar Wilde in his disastrous prosecution of the Marquess of Queensberry for libel, and representing the plaintiff in the "baccarat case", during which Sir Edward cross-examined the Prince of Wales.

Clarke was the son of J. G. Clarke of Moorgate Street, London. He was educated at King's College London. In 1859 he became a writer in India Office, but resigned in the next year, and became a law reporter. He obtained a Tancred Scholarship in 1861, and was called to the bar at Lincoln's Inn in 1864, joining the Home Circuit.

Clarke quickly gained a high reputation at the junior bar, and made his name appearing for the defence in the two most notorious cases of 1877, securing the acquittal of his namesake Chief Inspector Clarke in the Great Scotland Yard scandal (when other senior CID detectives were convicted of corruption) and unsuccessfully defending Patrick Staunton (who had been accused of complicity in starving his sister-in-law to death) in the Penge Murder. On the back of these successes Clarke took silk in 1880, and quickly came to be recognised as one of the leading members of the bar; he became a bencher of Lincoln's Inn in 1882, and was knighted in 1886. He also entered Parliament as Conservative MP for Southwark at a by-election early in 1880, but being unable to hold the seat at the general election later that year he was elected instead for Plymouth. He was Solicitor-General in the Conservative administration of 1886–1892, but declined office when the party returned to power in 1895 as he would have been debarred from continuing his lucrative private practice.

In 1899, Clarke found himself in total disagreement with his party over the government's South African policy, and he resigned his seat at Plymouth early the following year. He did not contest the general election of 1900, but returned to the House as MP for the City of London in 1906; however, he offended a section of his constituents by a speech against tariff reform in the House of Commons on 12 March 1906, and shortly afterwards he resigned his seat again on grounds of health.

He published a Treatise on the Law of Extradition in 1903, and several volumes of speeches (both political and legal). He also wrote a biography of Benjamin Disraeli. His autobiography, The Story of My Life, was published in 1918,[1] and a biography by Derek Walker-Smith and his grandson Edward Clarke (Life of Sir Edward Clarke) followed in 1939. 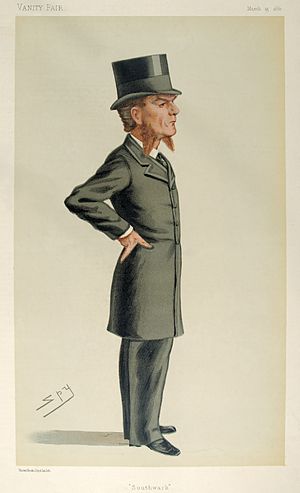 "Southwark". Caricature by Spy published in Vanity Fair in 1880.

Clarke's son, Percival Clark, was a prominent lawyer in the 1920s and 1930s. His great-nephew, Edward Clarke, followed him into law and was number two to Frederick Geoffrey Lawrence in the defence team for suspected serial killer John Bodkin Adams.[3] His youngest son William Clarke trained as a lawyer, but became a cryptographer.