The second of six children, DeBartolo was born in Youngstown, Ohio, a center of steel production that was also a major destination for immigrants from Southern and Eastern Europe. DeBartolo's parents, Anthony Paonessa and Rose Villani, had immigrated to the United States from Italy. DeBartolo never knew his biological father, who died suddenly before his birth.[1]

After Anthony Paonessa's death, Rose Villani Paonessa married Michael DeBartolo, and Edward took his stepfather's family name. Michael DeBartolo emigrated from Bari, Italy, with his family at age 17 and became a paving contractor and builder of warehouses and other structures.[1] While a teenager, Edward DeBartolo began working, transcribing paving contracts for his stepfather, who did not read or write English.

DeBartolo went on to earn a degree in civil engineering at the University of Notre Dame.[1] Next came a decade of construction jobs with his stepfather. Then in view of his engineering skills, DeBartolo found himself serving in the Army Corps of Engineers during World War II. It was during the War, in 1944, that he married Marie Patricia Montani and incorporated his own company, The Edward J. DeBartolo Corporation.

After the war ended, DeBartolo served as president of Michael DeBartolo Construction and as founder and president of his newly formed company. DeBartolo was able to take advantage of dramatic changes occurring across the United States after World War II. As more Americans moved into suburbs, there was a corresponding increase in demand for convenient access to stores. His first retail development was the construction of Gray's Drug Store and Sears, Roebuck department store in the "Uptown" area of Youngstown. DeBartolo's company was one of the first companies in the United States to build shopping centers in suburban communities. These shopping centers were initially plazas built as long strips, but soon DeBartolo began developing enclosed shopping malls as well, with brother Frank DeBartolo acting as architect.[1]

The Edward J. DeBartolo Corporation was the undisputed leader in the shopping mall industry from the birth of the industry until DeBartolo's death, owning almost one-tenth of all mall space in the United States.[1] DeBartolo also branched out into other types of urban development and construction, such as hotels, office parks, and condominiums. He established a work ethic of fifteen-hour days and seven-day weeks. He once told his senior executives, "My wife has never seen me lie down while the sun was up." By 1990, DeBartolo was estimated to have more than $1.4 billion in personal wealth.[1]

A powerful strategic thinker, DeBartolo began acquiring department store chains in the late 1980s. In 1986, he helped finance Robert Campeau's purchase of Allied Stores Corporation, a department store holding corporation that owned such iconic department store brands as Jordan Marsh and Maas Brothers, as well as specialty stores such as Bonwit Teller and Ann Taylor. DeBartolo loaned Campeau $150 million to bridge the financing gap. Campeau repaid the money and in 1986, DeBartolo assisted in financing Allied Stores Corporation's acquisition of Federated Department Stores, a department store holding company and the owner of Macy's and Bloomingdale's department stores. DeBartolo provided nearly $500 million in financing. In 1990, Federated went bankrupt, defaulting on the repayment of the loans made by DeBartolo; it emerged from bankruptcy after the ouster of Campeau in 1992 as a new public company under the name "Macy's, Inc." During the course of the bankruptcy, DeBartolo's cashflow was severely impaired due to Federated's nonpayment as well as the real estate recession of the time. DeBartolo's Federated positions were all realigned when Federated emerged from bankruptcy. Also in 1988 he partnered with Dillard's Department Stores to buy Higbee's of Cleveland, Ohio. In 1992 William Dillard, founder of Dillard's, bought DeBartolo's share, except for the property interest in Higbee's Public Square flagship store in Cleveland (sold to Tower City in 2001), and renamed the Higbee chain. The idea of a retail real estate developer going forward with new projects easily and quickly by virtue of anchor stores owned by the developer would never become a reality.

As a result of several years impaired cash flow, DeBartolo prepared to take his company public as a real estate investment trust or "REIT". Most of DeBartolo's competitors were preparing to do the same, their operations suffering from a lack of capital in the private markets. In late 1993, the two largest shopping center companies at the time, DeBartolo and Simon[ambiguous] were coming to the market simultaneously. Their advisors informed them that the capital markets could not absorb that much equity; either one of them must back down or prices would suffer severely. DeBartolo agreed to withdraw. In April, 1994, most of the properties owned by The Edward J. DeBartolo Corporation were transferred to DeBartolo Realty Corporation, a public REIT, in its initial public offering. The new company was chaired by Edward J. DeBartolo, Jr.; Edward J. DeBartolo, Sr. was unwilling to deal personally with the restraints of running a public company. In 1996, DeBartolo Realty Corporation was acquired by Simon Property Group, the public REIT formed by DeBartolo's longtime competitors, Melvin and Herbert Simon.

DeBartolo's contributions to the campus at the University of Notre Dame include DeBartolo Hall (the main classroom building) and DeBartolo Performing Arts Center (DPAC), both located on a quad that students refer to as "DeBartolo Quad". There is also a DeBartolo Hall on the campus of Youngstown State University in his hometown of Youngstown, where the DeBartolo Corporation continues to be based in nearby Boardman, Ohio and has made many endowments to YSU. 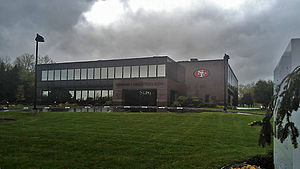 The headquarters of The DeBartolo Corporation in Boardman, Ohio with the San Francisco 49ers logo on the building, signifying the team's ownership by the DeBartolo-York family.

DeBartolo purchased the San Francisco 49ers in 1977, giving the team to his son. Edward J. DeBartolo, Jr. devoted significant resources to the team, became an expert in team management and player relations, and made it the most successful NFL franchise in the 1980s.[1]

DeBartolo founded the Pittsburgh Maulers of the United States Football League in March 1983, but folded the team after the first season (1984) when the league announced it would move to a fall schedule, the same time as the NFL's Pittsburgh Steelers.

The family also owned the Pittsburgh Penguins of the National Hockey League from February 1977 until selling it to an ownership group led by Howard Baldwin in November 1991. His team would win the Stanley Cup in 1991. He would be engraved onto the Stanley Cup along with his daughter Denise DeBartolo York.[2] DeBartolo said at a rally after the first win that the occasion "possibly the happiest moment of my life."[3] He also owned the soccer team Pittsburgh Spirit from 1978 until 1986.

While DeBartolo was unsuccessful in his attempt to purchase the Chicago White Sox in 1980,[1] he owned and developed three thoroughbred racetracks – Thistledown in Cleveland, Remington Park in Oklahoma City, and Louisiana Downs in Bossier City, Louisiana.[1]