He was born in Southampton on 19 April 1850. He was grandson of John Gregory, engineer-in-chief of the auxiliary engines in Sir John Franklin's last Arctic expedition, and was eldest child (in a family of three sons and five daughters) of Edward Gregory, a ship's engineer, and Mary Ann Taylor.[1]

On leaving Dr. Cruikshank's private school at fifteen he entered the drawing-office, in his native town, of the Peninsular and Oriental Steam Navigation Company, in whose employ his father sailed. He had set his mind upon being a painter. Making the acquaintance at Southampton of Hubert von Herkomer RA, whose family had settled there, he started a life-class with him.[1]

In 1869, Gregory went to London, and with Herkomer joined the South Kensington Art School. Subsequently he studied for a short time at the Royal Academy. He was soon employed in the decorations of the Victoria and Albert Museum, and in 1871, with his friends Herkomer and Robert Walker Macbeth, began working for The Graphic, which had just been started by William Luson Thomas. Gregory at first contributed sketches from the theatres, but soon freely transcribed sketches sent home from the French army at the front by Mr. Sydney P. Hall.

He married in 1876 Mary Joyner, who survived him without issue.[1] He died at his residence, Brompton House, Great Marlow, on 22 June 1909, and was buried in Great Marlow churchyard.[1] 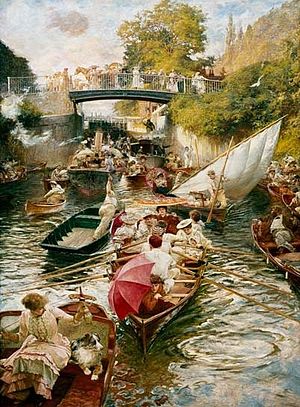 Gregory's illustrations, which were sometimes signed by both himself and Hall, discovered the variety and ingenuity of his draughtsmanship. He ceased to work regularly for the Graphic about 1875.[1]

Gregory was not a frequent exhibitor at Burlington House. His mark as a painter was first made by an oil-painting, Dawn (now in the possession of John Singer Sargent, R.A.), originally shown at Deschamps' gallery in 1879. Much of his best work appeared at the exhibitions of the Royal Institute of Painters in Water Colours, of which he was elected associate in 1871 and member in 1876. He succeeded Sir James Linton as president in 1898. From 1875 to 1882, his contributions to the Academy were mainly portraits, including that of Duncan McLaren MP, a replica of which is in the Scottish National Portrait Gallery. During his trip to Italy in 1882 he visited Capri and painted a beautiful picture of the Gardens of Augustus and Mount Solaro. As early as 1883, he was elected with Macbeth to the associateship, and he became academician in 1898, after the completion and exhibition of his Boulter's Lock: Sunday Afternoon, a work which hardly justified the years of elaboration spent upon it.[1]