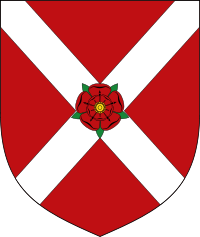 Arms of Edward Nevill, Baron Bergavenny: Gules, a saltire argent charged with a rose of the field (barbed and seeded proper).[1] These are his paternal arms of Neville differenced by a rose, the symbol of a 7th son. These arms are borne today by his descendants the Neville Marquesses of Abergavenny

Shortly after his first wife's death, in the summer or fall of 1448, he married Katherine Howard, daughter of Robert Howard and sister of John Howard, 1st Duke of Norfolk. His second wife bore him three additional daughters. Catherine Nevill (b. c. 1452/bef. 1473) married Robert Tanfield (b. 1461), son of Robert Tanfield and Elizabeth Brooke, daughter of Edward Brooke, 6th Baron Cobham, and Elizabeth Touchet, born c. 1433, and had children. Their son William was ancestor of Thomas Jefferson.[4][5] His daughter Margaret (b.bef. 1476-1506), married John Brooke, 7th Baron Cobham. John and Margaret are the grandparents of Elizabeth Brooke, Lady Wyatt. Daughter Anne (b.bef 1476-1480/81) did not long survive her father.

Neville was knighted sometime after 1426.[6]

He was a captain in the embattled Duchy of Normandy in 1449.[6] His eldest son Richard was one of the hostages given to the French when the English surrendered the city of Rouen in that year.

After the death of his first wife, he was summoned to Parliament in 1450 as "Edwardo Nevyll de Bergavenny", by which he is held to have become Baron Bergavenny. At the time, however, this was considered to be a summons by right of his wife, and so he was considered the 3rd, rather than the 1st, Baron.

In 1454, he was appointed to the Privy Council assembled by the Duke of York as Lord Protector, along with his more prominent Neville kinsmen. He was a commissioner of array in Kent in 1461, and was a captain in Edward IV's army in the North the following year. He was again a commissioner of array in 1470, remaining loyal to Edward IV, unlike his nephew, the Earl of Warwick[6]