The Honourable Sir Edward Pakenham GCB (pro. pack-en'um) (19 March 1778 – 8 January 1815), was an Anglo-Irish Army Officer and Politician. He was the son of the Earl of Longford and brother-in law of the Duke of Wellington, with whom he served in the Peninsular War. Appointed as commander of British forces in North America in 1814, he was killed in action at the Battle of New Orleans.

Pakenham was born at Pakenham Hall (now known as Tullynally Castle), County Westmeath, Ireland to Edward Pakenham, 2nd Baron Longford and the former Catherine Rowley. He was educated at The Royal School, Armagh. His family purchased his commission as a lieutenant in the 92nd Regiment of Foot when he was only sixteen. Between 1799 and 1800, Pakenham also represented Longford Borough in the Irish House of Commons.

Known as 'Ned' to his friends, he served with the 23rd Light Dragoons against the French in Ireland during the 1798 Rebellion and later in Nova Scotia, Barbados, and Saint Croix. He led his men in an attack on Saint Lucia in 1803, where he was wounded. He also fought in the Danish campaign at the Battle of Copenhagen (1807) and in Martinique against the French Empire, where he received another wounding. In 1806, his sister Catherine married Arthur Wellesley, the future Duke of Wellington.

Pakenham, as adjutant-general, joined his well known in-law, the Duke of Wellington, in the Peninsular War. He commanded a regiment in the Battle of Bussaco in 1810 and in 1811 fought in the Battle of Fuentes de Onoro to defend the besieged fortress of Almeida, helping to secure a British victory. In 1812 he was praised for his performance at Salamanca in which he commanded the Third Division and hammered onto the flank of the extended French line. He was awarded the Grand Cross to the Order of the Bath in 1815. He also received the Army Gold Cross and clasps for the battles of Martinique, Busaco, Fuentes d'Oñoro, Salamanca, Pyrenees, Nivelle, Nive, Orthez, and Toulouse. 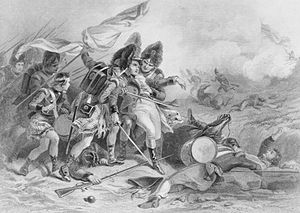 Death of Pakenham at the Battle of New Orleans

In September 1814, Pakenham, having been promoted to the rank of major-general, accepted an offer to replace General Robert Ross as commander of the British North American army, after Ross was killed during the skirmishing prior to the Battle of North Point near Baltimore. On October 24, 1814, Pakenham's Secret Orders were issued in regard to the military operation against New Orleans. The UK Secretary of War and the Colonies, Henry Bathurst, 3rd Earl Bathurst, instructed Pakenham to not stop offensive military operations, even during the peace talks. The following are the actual orders:

Sir: It has occurred to me that one case may arise affecting your situation upon the Coasts of America for which the Instructions addressed to the late Major General Ross have not provided. You may possibly hear whilst engaged in active operations that the Preliminaries of Peace between His Majesty and the United States have been signed in Europe and that they have been sent to America in order to receive the Ratification of The President. As the Treaty would not be binding until it shall have received such Ratification in which we may be disappointed by the refusal of the Government of the United States, it is advisable that Hostilities should not be suspended until you shall have official information that The President has actually ratified the Treaty and a Person will be duly authorized to apprise you of this event. As during this interval, judging from the experience we have had, the termination of the war must be considered as doubtful, you will regulate your proceedings accordingly, neither omitting an opportunity of obtaining signal success, nor exposing the troops to hazard or serious loss for an inconsiderable advantage. And you will take special care not so to act under the expectation of hearing that the Treaty of Peace has been ratified, as to endanger the safety of His Majesty’s Forces, should that expectation be unhappily disappointed.

I have etc. Bathurst

[1] The next year during the Battle of New Orleans while rallying his troops near the enemy line, grapeshot from US artillery shattered his left knee and killed his horse. As he was helped to his feet by his senior Aide-de-camp, Major Duncan MacDougall, Pakenham was wounded a second time in his right arm. After he mounted MacDougall's horse, more grapeshot ripped through his spine, fatally wounding him, and was carried off the battlefield on a stretcher. He was laid beneath the oaks which today still bear his name.[2] He was 36 years of age. His last words were reputed to be telling MacDougall to find General Lambert to tell him to assume command as well as "Tell him... tell Lambert to send forward the reserves."[3] The battle ended in defeat for the British.

The American commander was Major General Andrew Jackson, who would go on to become the President of the United States. A general ceasefire had already been declared by the Treaty of Ghent, signed on 24 December 1814, but as peace was not yet ratified in Washington as required by the treaty, the nations were still formally at war. The news of the treaty did not reach the combatants until February, several weeks after the battle.[4]

Wellington had held Pakenham in high regard and was deeply saddened by news of his death, commenting:

We have but one consolation, that he fell as he lived, in the honourable discharge of his duty and distinguished as a soldier and a man. I cannot but regret that he was ever employed on such a service or with such a colleague. The expedition to New Orleans originated with that colleague... The Americans were prepared with an army in a fortified position which still would have been carried, if the duties of others, that is of the Admiral (Sir Alexander Cochrane), had been as well performed as that of he whom we now lament.[5]

There is a statue in his memory at the South Transept of St Paul's Cathedral in London. His body was returned in a cask of rum and buried in the Pakenham family vault in Killucan in County Westmeath, Ireland.

There is a small village in Ontario, Canada, named in honour of the general's short visit there and his role in the War of 1812. The village is located on the Mississippi River which originates from Mississippi Lake and empties into the Ottawa River.

There is also a suburb of Melbourne, Australia, named after him.