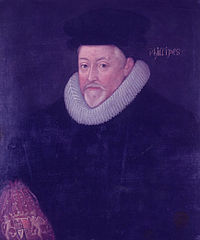 Sir Edward Phelips (ca. 1555/1560 – 1614) was an English lawyer and politician, the Speaker of the English House of Commons from 1604 until 1611, and subsequently Master of the Rolls from 1611 until his death in 1614. He was an elected MP from 1584, and in 1588, following a successful career as a lawyer, he commissioned Montacute House to be built as a home for himself and his family. He was knighted in 1603[1] and one of his major roles was as the opening prosecutor during the trial of the Gunpowder Plotters.[2]

He married Elizabeth Newdigate, and his son, Sir Robert Phelips, inherited his land and property.[3]

He was fourth and youngest son of Thomas Phelips (1500–1588) of Montacute, Somerset, by his wife Elizabeth (d. 1598), daughter of John Smythe of Long Ashton in the same county. His father stood godfather to Thomas Coryate. Edward was born about 1560: according to Coryate, who refers to him as a patron, he was about 53 in 1613.[4]

He joined the Middle Temple, where he was autumn reader in 1596. In 1601 he entered parliament as knight of the shire for Somerset. On 11 February 1603 he was named serjeant-at-law, but Queen Elizabeth died, and he did not proceed to his degree until the following reign. On 17 May he was made king's serjeant and knighted. In November he took part in the trial of Sir Walter Raleigh.He was re-elected to parliament for Somerset on 11 February 1604, and on 19 March was elected speaker. According to Sir Julius Cæsar, he was the best speaker for some decades, and though long-winded did expedite some business for the king.[4]

On 17 July 1604 he was granted the office of justice of common pleas in the county palatine of Lancaster. In this capacity he was very active against Catholics; he is said to have declared that, as the law stood, all who were present when mass was celebrated were guilty of felony. He was one of those appointed to examine the Gunpowder Plot conspirators, and in January 1606 opened the indictment against Guy Fawkes. He was also chancellor to Henry Frederick, Prince of Wales. On 2 December 1608 he was granted the reversion of the mastership of the rolls, but did not succeed to the office until January 1611. On 14 July 1613 he was appointed ranger of all royal forests, parks, and chases in England.[4]

Besides his London house in Chancery Lane, and another at Wanstead, Essex, where he entertained the king, Phelips built a large mansion in Somerset, Montacute House, which is still standing, and in the possession of his descendants. He died on 11 September 1614, having married, firstly, Margaret (d. 28 April 1590), daughter of Robert Newdegate of Newdegate, Surrey, by whom he had two sons, Sir Robert and Francis; secondly, Elizabeth (d. 26 March 1638), daughter of Thomas Pigott of Doddershall House, Buckinghamshire.[4]