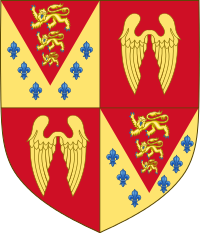 Arms of Edward Seymour, 1st Duke of Somerset: Quarterly, 1st and 4th: Or, on a pile gules between six fleurs-de-lys azure three lions of England (special grant); 2nd and 3rd: Gules, two wings conjoined in lure or (Seymour)[2] These arms concede the positions of greatest honour, the 1st & 4th quarters, to a special grant of arms incorporating the fleurs-de-lys and lions of the royal arms of Plantagenet

Edward Seymour was born circa 1500, the son of Sir John Seymour (1474-1536) by his wife Margery Wentworth. In 1514 aged about 14 he received an appointment in the household of Mary Tudor.

When Edward's sister Jane Seymour married King Henry VIII in 1536, he was created Viscount Beauchamp on 5 June 1536, and Earl of Hertford on 15 October 1537. He became Warden of the Scottish Marches and continued in royal favour after his sister's death on 24 October 1537.

Upon the death of Henry VIII (28 January 1547), Seymour's nephew became king as Edward VI. Henry VIII's will named sixteen executors, who were to act as Edward's Council until he reached the age of 18. These executors were supplemented by twelve men "of counsail" who would assist the executors when called on.[4] The final state of Henry VIII's will has occasioned controversy. Some historians suggest that those close to the king manipulated either him or the will itself to ensure a shareout of power to their benefit, both material and religious. In this reading, the composition of the Privy Chamber shifted towards the end of 1546 in favour of the Protestant faction.[5] In addition, two leading conservative Privy Councillors were removed from the centre of power. Stephen Gardiner was refused access to Henry during his last months. Thomas Howard, 3rd Duke of Norfolk, found himself accused of treason; the day before the king's death his vast estates were seized, making them available for redistribution, and he spent the whole of Edward's reign in the Tower of London.[6] Other historians have argued that Gardiner's exclusion had non-religious causes, that Norfolk was not noticeably conservative in religion, that conservatives remained on the Council, and that the radicalism of men such as Sir Anthony Denny, who controlled the dry stamp that replicated the king's signature, is debatable.[7] Whatever the case, Henry's death was followed by a lavish hand-out of lands and honours to the new power group.[8] The will contained an "unfulfilled gifts" clause, added at the last minute, which allowed Henry's executors to freely distribute lands and honours to themselves and the court,[9] particularly to Seymour, who became the Lord Protector of the Realm and Governor of the King's Person, and who created himself Duke of Somerset.[8]

Henry VIII's will did not provide for the appointment of a Protector. It entrusted the government of the realm during his son's minority to a Regency Council that would rule collectively, by majority decision, with "like and equal charge".[10] Nevertheless, a few days after Henry's death, on 4 February, the executors chose to invest almost regal power in the earl of Hertford.[11] Thirteen out of the sixteen (the others being absent) agreed to his appointment as Protector, which they justified as their joint decision "by virtue of the authority" of Henry's will.[12] Seymour may have done a deal with some of the executors, who almost all received hand-outs.[13] He is known to have done so with William Paget, private secretary to Henry VIII,[14] and to have secured the support of Sir Anthony Browne of the Privy Chamber.[15]

Hertford's appointment was in keeping with historical precedent,[16] and his eligibility for the role was reinforced by his military successes in Scotland and France. In March 1547, he secured letters patent from King Edward granting him the almost monarchical right to appoint members to the Privy Council himself and to consult them only when he wished.[17] In the words of historian G. R. Elton, "from that moment his autocratic system was complete".[18] He proceeded to rule largely by proclamation, calling on the Privy Council to do little more than rubber-stamp his decisions.[19]

Somerset's takeover of power was smooth and efficient. The imperial ambassador, Francis Van der Delft, reported that he "governs everything absolutely", with Paget operating as his secretary, though he predicted trouble from John Dudley, Viscount Lisle, who had recently been raised to Earl of Warwick in the share-out of honours.[20] In fact, in the early weeks of his Protectorate, Somerset met opposition only from the Chancellor, Thomas Wriothesley, whom the Earldom of Southampton had evidently failed to buy off, and from his own brother.[21] Wriothesley, a religious conservative, objected to Somerset’s assumption of monarchical power over the Council. He then found himself abruptly dismissed from the chancellorship on charges of selling off some of his offices to delegates.[22] 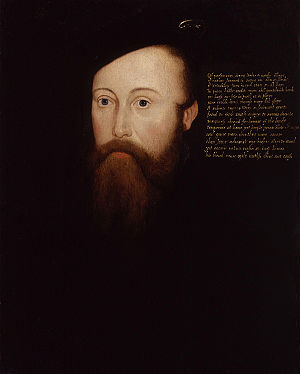 Somerset faced less manageable opposition from his younger brother Thomas, who has been described as a "worm in the bud".[23] As King Edward's uncle, Thomas Seymour demanded the governorship of the king’s person and a greater share of power.[24] Somerset tried to buy his brother off with a barony, an appointment to the Lord Admiralship, and a seat on the Privy Council—but Thomas was bent on scheming for power. He began smuggling pocket money to King Edward, telling him that Somerset held the purse strings too tight, making him a "beggarly king".[25] He also urged him to throw off the Protector within two years and "bear rule as other kings do"; but Edward, schooled to defer to the Council, failed to co-operate.[26]

In summer 1548, a pregnant Catherine Parr discovered Thomas Seymour embracing Princess Elizabeth.[28] As a result, Elizabeth was removed from Catherine Parr's household and transferred to Sir Anthony Denny's. That September, Catherine Parr died in childbirth, and Thomas Seymour promptly resumed his attentions to Elizabeth by letter, planning to marry her. Elizabeth was receptive, but, like Edward, unready to agree to anything unless permitted by the Council.[29] In January 1549, the Council had Thomas Seymour arrested on various charges, including embezzlement at the Bristol mint. King Edward himself testified about the pocket money.[30] Most importantly, Thomas Seymour had sought to officially receive the governorship of King Edward, as no earlier Lord Protectors, unlike Somerset, had ever held both functions. Lack of clear evidence for treason ruled out a trial, so Seymour was condemned instead by an Act of Attainder and beheaded on 20 March 1549.[31]

Somerset’s only undoubted skill was as a soldier, which he had proved on expeditions to Scotland, burning Edinburgh in May 1544, and in the defence of Boulogne-sur-Mer in 1546. From the first, his main interest as Protector was the war against Scotland.[32] After a crushing victory at the Battle of Pinkie Cleugh in September 1547, he set up a network of garrisons in Scotland, stretching as far north as Dundee.[33] His initial successes, however, were followed by a loss of direction, as his aim of uniting the realms through conquest became increasingly unrealistic. The Scots allied with France, who sent reinforcements for the defence of Edinburgh in 1548,[34] while Mary, Queen of Scots, was removed to France, where she was betrothed to the dauphin.[35] The cost of maintaining the Protector's massive armies and his permanent garrisons in Scotland also placed an unsustainable burden on the royal finances.[36] A French attack on Boulogne in August 1549 at last forced Somerset to begin a withdrawal from Scotland.[37]

During 1548, England was subject to social unrest. After April 1549, a series of armed revolts broke out, fuelled by various religious and agrarian grievances. The two most serious rebellions, which required major military intervention to put down, were in Devon and Cornwall and in Norfolk. The first, sometimes called the Prayer Book Rebellion, arose mainly from the imposition of church services in English, and the second, led by a tradesman called Robert Kett, mainly from the encroachment of landlords on common grazing ground.[38] A complex aspect of the social unrest was that the protestors believed they were acting legitimately against enclosing landlords with the Protector's support, convinced that the landlords were the lawbreakers.[39]

The same justification for outbreaks of unrest was voiced throughout the country, not only in Norfolk and the west. The origin of the popular view of Somerset as sympathetic to the rebel cause lies partly in his series of sometimes liberal, often contradictory, proclamations,[40] and partly in the uncoordinated activities of the commissions he sent out in 1548 and 1549 to investigate grievances about loss of tillage, encroachment of large sheep flocks on common land, and similar issues.[41] Somerset's commissions were led by the evangelical M.P. John Hales, whose socially liberal rhetoric linked the issue of enclosure with Reformation theology and the notion of a godly commonwealth.[42] Local groups often assumed that the findings of these commissions entitled them to act against offending landlords themselves.[43] King Edward wrote in his Chronicle that the 1549 risings began "because certain commissions were sent down to pluck down enclosures".[44]

Whatever the popular view of Somerset, the disastrous events of 1549 were taken as evidence of a colossal failure of government, and the Council laid the responsibility at the Protector's door.[45] In July 1549, Paget wrote to Somerset: "Every man of the council have misliked your proceedings ... would to God, that, at the first stir you had followed the matter hotly, and caused justice to be ministered in solemn fashion to the terror of others ...".[46]

The sequence of events that led to Somerset's removal from power has often been called a coup d'état.[45] By 1 October 1549, Somerset had been alerted that his rule faced a serious threat. He issued a proclamation calling for assistance, took possession of the king's person, and withdrew for safety to the fortified Windsor Castle, where Edward wrote, "Me thinks I am in prison".[47] Meanwhile, a united Council published details of Somerset's government mismanagement. They made clear that the Protector's power came from them, not from Henry VIII's will. On 11 October, the Council had Somerset arrested and brought the king to Richmond.[45] Edward summarised the charges against Somerset in his Chronicle: "ambition, vainglory, entering into rash wars in mine youth, negligent looking on Newhaven, enriching himself of my treasure, following his own opinion, and doing all by his own authority, etc."[48] In February 1550, John Dudley, Earl of Warwick, emerged as the leader of the Council and, in effect, as Somerset's successor. Although Somerset was released from the Tower and restored to the Council in early 1550, he was executed for felony in January 1552 after scheming to overthrow Dudley's regime.[49] Edward noted his uncle's death in his Chronicle: "the duke of Somerset had his head cut off upon Tower Hill between eight and nine o'clock in the morning".[50] Edward Seymour, Duke of Somerset was interred at St. Peter ad Vincula, Tower of London.

Historians have contrasted the efficiency of Somerset's takeover of power in 1547 with the subsequent ineptitude of his rule.[51] By autumn 1549, his costly wars had lost momentum, the crown faced financial ruin, and riots and rebellions had broken out around the country. Until recent decades, Somerset's reputation with historians was high, in view of his many proclamations that appeared to back the common people against a rapacious landowning class.[52] In the early 20th century this line was taken by the influential A. F. Pollard, to be echoed by Edward VI's 1960s biographer W. K. Jordan. A more critical approach was initiated by M. L. Bush and Dale Hoak in the mid-1970s. Since then, Somerset has often been portrayed as an arrogant ruler, devoid of the political and administrative skills necessary for governing the Tudor state.[53]

The line of Edward Seymour and Anne Stanhope died out with the seventh Duke of Somerset in 1750, when the descendants of Edward Seymour by his first wife, Catherine Fillol, inherited the Somerset dukedom in accordance with the Private Act of 1541.[60]