Edward George Geoffrey Smith-Stanley, 14th Earl of Derby KG GCMG PC (29 March 1799 – 23 October 1869) was a British statesman, three times Prime Minister of the United Kingdom, and to date the longest serving leader of the Conservative Party. He was known before 1834 as Edward Stanley, and from 1834 to 1851 as Lord Stanley. His record was unusual, since he is one of only four British Prime Ministers to have three or more separate periods in office.[1] However his ministries all lasted less than two years, and totalled 3 years 280 days.

Stanley was born to Lord Stanley (later the 13th Earl of Derby) and his wife, Charlotte Margaret née Hornby, the daughter of the Reverend Geoffrey Hornby. The Stanleys were a long-established and very wealthy landowning family whose principal residence was Knowsley Hall in Lancashire. Stanley was educated at Eton College and at Christ Church, Oxford.

He was elected to Parliament as a Whig in 1820. When the Whigs returned to power in 1830, Stanley became Chief Secretary for Ireland in Lord Grey's Government, and entered the Cabinet in 1831. In October 1831, Stanley wrote a letter, the Stanley Letter, to the Duke of Leinster establishing the system of National Education in Ireland – this letter remains today the legal basis for the predominant form of primary education in Ireland.[citation needed] In 1833, Stanley moved up to the more important position of Secretary of State for War and the Colonies. Stanley, a conservative Whig, broke with the ministry over the reform of the Church of Ireland in 1834 and resigned from the government. He then formed a group called the 'Derby Dilly' and attempted to chart a middle course between what they saw as the increasingly radical Whiggery of Lord John Russell and the conservatism of the Tories, but Tory leader Sir Robert Peel's turn to the centre with the 1834 Tamworth Manifesto robbed them of much of the uniqueness of their programme.

The term Derby Dilly was coined by Irish Nationalist leader Daniel O'Connell. Besides Stanley, the other principal members of the Dilly were Sir James Graham, who had resigned as First Lord of the Admiralty; Lord Ripon, who had resigned as Lord Privy Seal; and the Duke of Richmond, who had resigned as Postmaster General. These four ministers had all come from notably different political backgrounds – Stanley and Graham were old Whigs, Ripon was a former Canningite Tory, while Richmond was an arch-conservative Tory who had incongruously found himself in the Grey cabinet.

Although they did not participate in Peel's short-lived 1835 ministry, over the next several years they gradually merged into Peel's Conservative Party, with several members of the Derby Dilly taking prominent positions in Peel's second ministry. Joining the Conservatives, Stanley again served as Colonial Secretary in Sir Robert Peel's second government in 1841. In 1844 he was summoned to the House of Lords in his father's Baron of Stanley by Writ of Acceleration. He broke with the Prime Minister again in 1845, this time over the repeal of the Corn Laws, and managed to bring the majority of the Conservative party with him, (including, among others, the young Benjamin Disraeli). He thereafter led the protectionist faction of the Conservative Party. In the House of Lords, 23 November 1847, he accused the Irish Catholic clergy of using the confessional to encourage lawlessness and crime [2] This was disputed in a series of letters by the coadjutor Bishop of Derry, Edward Maginn. In 1851 he succeeded his father as Earl of Derby.

The party system was in a state of flux when the Conservatives left office in 1846, the outstanding issues being the question of Ireland and the unresolved franchise. The protectionists had a core of leaders, of whom Disraeli was a leading light. But in opposition the party was still in-fighting, although Disraeli was determined to heal rifts.

Derby formed a minority Government in February 1852 following the collapse of Lord John Russell's Whig Government. In this new ministry, Benjamin Disraeli would be appointed Chancellor of the Exchequer. With many senior Conservative ministers having followed Peel, Derby was forced to appoint many new men to office – of the Cabinet only three were pre-existing Privy Counsellors. When the aged Duke of Wellington, by then very deaf, heard the list of inexperienced Cabinet Ministers being read aloud in the House of Lords, he gave the government its nickname by shouting "Who? Who?". From then this government would be known as the "Who? Who? Ministry".[3]

Traditionally Derby's ministries were thought in hindsight to have been dominated by Disraeli. However recent research suggests that this was not always the case, especially in the government's conduct of foreign policy. There, Derby and his Foreign Secretaries Lord Malmesbury and later his son Lord Stanley pursued a course of action that was aimed at building up power through financial strength, seeking to avoid wars at all costs, co-operating with other powers, and working through the Concert of Europe to resolve diplomatic problems. This contrasted sharply with the policy of military strength and prestige that Disraeli would later pursue, and Derby's very different take on foreign policy could be seen as the precursor of "splendid isolation", as well as the diplomatic settlement of Europe pursued by later Conservatives in the late 19th century and the 1930s.

In the general election of June 1852, the Conservative party under Derby and Disraeli won only 330 seats in the House of Commons—42.9% of the total. Although the Whigs actually won fewer seats—292 seats—there were several small groups in Parliament, who might be willing to side with the Whigs on particular issues, like the 38 Conservative members of parliament who were Peelites,[4] who had already joined with the Whigs in June 1846 to repeal the Corn Laws; the 113 members who were Free Traders[5] and who were interested in eliminating all tariffs on consumer goods; and the 63 members of the Irish Brigade[6] who were interested in the independence of Ireland and Tenant's Rights for Irish tenants. Immediately following the election in June 1852, none of these small groups were willing to work with the Whigs to form a government. Accordingly, the Earl of Derby was invited to form a minority government. Derby did so and appointed Disraeli as the new Chancellor of the Exchequer.

However, the real issues facing Parliament could not be postponed for long and when Disraeli submitted his first Budget to Parliament in December 1852, it proved so unpopular with the Peelites, the Free Traders and the Irish Brigade that it was voted down in a "no confidence" vote. As a result, the Derby minority government fell making way for a Peelite-Whig coalition under Lord Aberdeen.

In 1858, Derby formed another minority government upon the demise of Lord Palmerston's first ministry, with Disraeli again at the Exchequer and Leader of the Commons. Among the notable achievements of this administration were the end of the British East India Company following the Sepoy Mutiny, which brought India under direct British control for the first time. Once again, the government was short-lived, collapsing after only a year. In 1859, he was appointed a Knight of the Garter.

Derby returned to power for the third and last time in 1866, following the collapse of Lord Russell's second government. Once again, Disraeli was a leading figure. This administration was particularly notable for the passage of the Reform Act 1867, which greatly expanded the suffrage. In early 1868, Derby retired from political life, leaving Disraeli to succeed him. In 1869, he was appointed a Knight Grand Cross of the Order of St Michael and St George in recognition of his former role as Secretary of State for War and the Colonies.[8]

Although a great orator, Derby was frequently criticised for his languid leadership. Nevertheless, he had many significant achievements, both as minister and Prime Minister, and has been described as the father of the modern Conservative Party.[citation needed] His tenure of 22 years as party leader still stands as the longest in Conservative Party history and indeed the history of any other political party in British history, only Labour's Clement Attlee came close at 20 years. 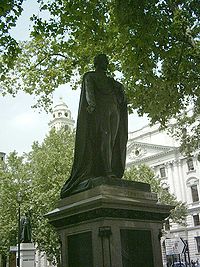 Edward Smith-Stanley's ancestors were Kings of Man from 1405 and later Lords of Man. Thomas Stanley, First Earl of Derby famously switched sides at the Battle of Bosworth and placed the crown of the fallen King Richard III upon the head of Henry Tudor.

The National School system in Ireland, National school (Ireland) the predominant form of primary school education, remains based on the multi-denominational system set up by Stanley in the Stanley Letter – the letter tries to deal with the seemingly intractable issue of different Christian religions living together in Ireland. The former site of Fort Langley, British Columbia was renamed Derby by the Royal Engineers in 1858, apparently in honour of the Earl, who was British Prime Minister at the time. Stanley (sometimes referred to as "Port Stanley") on East Falkland, capital of the Falkland Islands is named after Edward Smith-Stanley, Port Stanley in Ontario Canada, as well as the area Stanley in Hong Kong.