He was born to Edward Smith-Stanley, 14th Earl of Derby, who led the Conservative Party from 1846–1868 and served as Prime Minister three times, and Emma Caroline Bootle-Wilbraham, daughter of Edward Bootle-Wilbraham, 1st Baron Skelmersdale, and was the older brother of Frederick Arthur Stanley, 16th Earl of Derby. The Stanleys were one of the richest landowning families in England. Lord Stanley, as he was styled before acceding to the earldom, was educated at Eton, Rugby and Trinity College, Cambridge, where he took a first in classics and became a member of the society known as the Cambridge Apostles.[1]

In March 1848 he unsuccessfully contested the borough of Lancaster, and then made a long tour in the West Indies, Canada and the United States. During his absence he was elected member for King's Lynn, which he represented till October 1869, when he succeeded to the peerage. He took his place, as a matter of course, among the Conservatives, and delivered his maiden speech in May 1850 on the sugar duties. Just before, he had made a very brief tour in Jamaica and South America. In 1852 he went to India, and while travelling in that country he was appointed under-secretary for foreign affairs in his father's first administration. On 11 March 1853, he was commissioned a captain in the 3rd Royal Lancashire Militia.[2]

From the outset of his career he was known to be more politically sympathetic to the Liberals rather than the Conservatives, and in 1855 Lord Palmerston offered him the post of Secretary of State for the Colonies. He was much tempted by the proposal, and hurried down to Knowsley to consult his father, who called out when he entered the room, "Halo, Stanley! what brings you here?—Has Dizzy cut his throat, or are you going to be married?" When the object of his sudden appearance had been explained, the Conservative chief received the courteous suggestion of the prime minister with anything but favour, and the offer was declined. On 13 May 1856, he was appointed to the Royal Commission on the purchase of commissions in the British army.[3] In his father's second administration Lord Stanley held, at first, the office of Secretary of State for the Colonies (1858), but became President of the Board of Control on the resignation of Lord Ellenborough. He had the charge of the India Bill of 1858 in the House of Commons, became the first Secretary of State for India, and left behind him in the India Office an excellent reputation as a man of business.

After the revolution in Greece and the disappearance of King Otto, the people most earnestly desired to have Queen Victoria's second son, Prince Alfred, for their king. He declined the honour, and they then took up the idea that the next best thing they could do would be to elect some great and wealthy English noble, not concealing the hope that although they might have to offer him a Civil List he would decline to receive it. Lord Stanley was the prime favourite as an occupant of this bed of thorns, and it has been said that he was actually offered the crown. That, however, is not true; the offer was never formally made. 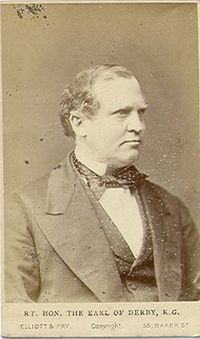 The Earl of Derby.

After the fall of the Russell government in 1866 he became Secretary of State for Foreign Affairs in his father's third administration. He compared his conduct in that great post to that of a man floating down a river and fending off from his vessel, as well as he could, the various obstacles it encountered. He thought that that should be the normal attitude of an English foreign minister, and probably in the circumstances of the years 1866–1868 it was the right one. He enunciated the policy of Splendid isolation in 1866 :

it is the duty of the Government of this country, placed as it is with regard to geographical position, to keep itself upon terms of goodwill with all surrounding nations, but not to entangle itself with any single or monopolizing alliance with any one of them; above all to endeavor not to interfere needlessly and vexatiously with the internal affairs of any foreign country."[4][5]

He arranged the collective guarantee of the neutrality of Luxembourg in 1867, negotiated a convention about the Alabama, which, however, was not ratified, and most wisely refused to take any part in the troubles in Crete. In 1874 he again became Foreign Secretary in Disraeli's government. He acquiesced in the purchase of the Suez Canal shares, a measure then considered dangerous by many people, but ultimately most successful; he accepted the Andrassy Note, but declined to accede to the Berlin Memorandum. Derby's conduct during the Eastern Crisis was mysterious to many of his contemporaries and for some time thereafter. The 1911 Encyclopædia Britannica could still state that Derby's "part in the later phases of the Russo-Turkish struggle has never been fully explained, for with equal wisdom and generosity he declined to gratify public curiosity at the cost of some of his colleagues. A later generation will know better than his contemporaries what were the precise developments of policy which obliged him to resign. He kept himself ready to explain in the House of Lords the course he had taken if those whom he had left challenged him to do so, but from that course they consistently refrained."

The fact of the matter was that Derby's hope for peace with Russia led him (and his wife) to share Cabinet secrets with the Russian ambassador, Pyotr Shuvalov, in hopes of averting war with Russia.[6] Robert Blake commented that "Derby surely must be the only Foreign Secretary in British history to reveal the innermost secrets of the Cabinet to the ambassador of a foreign power in order to frustrate the presumed intentions of his own Prime Minister." Derby resigned in January 1878 when the Cabinet resolved to send the British fleet through the Dardanelles, but when that action soon proved unnecessary, Derby was allowed to withdraw his resignation. However, he resigned again and finally in the same year when the Cabinet agreed to call up the reserve.

By October 1879 it was clear enough that he had thrown in his lot with the Liberal Party, but it was not till March 1880 that he publicly announced this change of allegiance. He did not at first take office in the second Gladstone government, but became Colonial Secretary in December 1882, holding this position till the fall of that government in the summer of 1885. In 1886 the old Liberal party was run on the rocks and went to pieces. Lord Derby became a Liberal Unionist, and took an active part in the general management of that party, leading it in the House of Lords till 1891, when Lord Hartington became Duke of Devonshire. In 1892 he presided over the Labour Commission.

He served as President of the first day of the 1881 Co-operative Congress.[7]

Lord Derby married Lady Mary, daughter of George Sackville-West, 5th Earl De La Warr and widow of James Gascoyne-Cecil, 2nd Marquess of Salisbury, in 1870. They had no children. Derby's health never recovered from an attack of influenza which he had in 1891, and he died at Knowsley on 21 April 1893, aged 66. He was succeeded in the earldom by his younger brother, Frederick. Lady Derby died in December 1900.