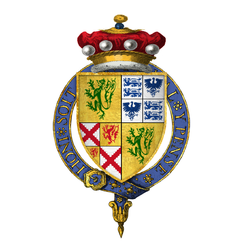 Edward Sutton was the son of Sir Edmund Sutton and Joyce de Tiptoft,[1] daughter of Sir John Tiptoft, 1st Baron Tiptoft. In right of his wife Joyce, Edmund Sutton benefited from the her inheritance of the Tibetot barony and Cherleton barony, and thus co-heir to the Powis inheritance, but was never created baron of these holdings.

Edward married Cecily Willoughby,[1] granddaughter of Katherine Neville, Duchess of Norfolk, by whom he had:[2]