Philip Edward Thomas (3 March 1878 – 9 April 1917) was a British poet, essayist, and novelist. He is commonly considered a war poet, although few of his poems deal directly with his war experiences, and his career in poetry only came after he had already been a successful writer and literary critic. In 1915, he enlisted in the British Army to fight in the First World War and was killed in action during the Battle of Arras in 1917, soon after he arrived in France.

Thomas was born in Lambeth, London. He was educated at Battersea Grammar School, St Paul's School in London and Lincoln College, Oxford. His family were mostly Welsh. In June 1899 he married Helen Berenice Noble (1878-1967),[1] in Fulham, while still an undergraduate, and determined to live his life by the pen. He then worked as a book reviewer, reviewing up to 15 books every week.[2] He was already a seasoned writer by the outbreak of war, having published widely as a literary critic and biographer as well writing on the countryside. He also wrote a novel, The Happy-Go-Lucky Morgans (1913), a "book of delightful disorder".[3]

Thomas worked as literary critic for the Daily Chronicle in London and became a close friend of Welsh tramp poet W. H. Davies, whose career he almost single-handedly developed.[4]

From 1905, Thomas lived with his wife Helen and their family at Elses Farm near Sevenoaks, Kent. He rented to Davies a tiny cottage nearby, and nurtured his writing as best he could. On one occasion, Thomas even had to arrange for the manufacture, by a local wheelwright, of a makeshift wooden leg for Davies. 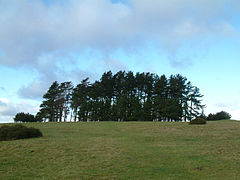 Clump of Scots pine trees on May Hill - Robert Frost and Thomas walked here and it was here that Thomas began writing his poem "Words".[5]

Even though Thomas thought that poetry was the highest form of literature and regularly reviewed it, he only became a poet himself at the end of 1914[2] when living at Steep, East Hampshire, and initially published his poetry under the name Edward Eastaway.

By August 1914, the village of Dymock in Gloucestershire had become the residence of a number of literary figures, including Lascelles Abercrombie, Wilfrid Gibson and American poet Robert Frost. Edward Thomas was a visitor at this time.[6]

Thomas immortalised the (now-abandoned) railway station at Adlestrop in a poem of that name after his train made a stop at the Cotswolds station on 24 June 1914, shortly before the outbreak of the First World War.[7] 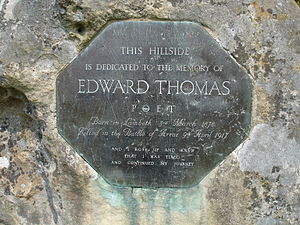 His memorial stone near Steep

Thomas enlisted in the Artists Rifles in July 1915, despite being a mature married man who could have avoided enlisting. He was unintentionally influenced in this decision by his friend Frost, who had returned to the U.S. but sent Thomas an advance copy of "The Road Not Taken".[8] The poem was intended by Frost as a gentle mocking of indecision, particularly the indecision that Thomas had shown on their many walks together; however, most audiences took the poem more seriously than Frost intended, and Thomas similarly took it seriously and personally, and it provided the last straw in Thomas' decision to enlist.[8]

Thomas was promoted corporal, and in November 1916 was commissioned into the Royal Garrison Artillery as a second lieutenant. He was killed in action soon after he arrived in France at Arras on Easter Monday, 9 April 1917. To spare the feelings of his widow Helen, she was told the fiction of a "bloodless death" i.e. that Thomas was killed by the concussive blast wave of one of the last shells fired as he stood to light his pipe and that there was no mark on his body.[9] However, a letter from his commanding officer Franklin Lushington written in 1936 (and discovered many years later in an American archive) states that in reality the cause of Thomas' death was due to being "shot clean through the chest".[10] W. H. Davies was devastated by the death and his commemorative poem "Killed In Action (Edward Thomas)" was included in Davies's 1918 collection "Raptures".[4]

Thomas is buried in the Commonwealth War Graves Cemetery at Agny in France (Row C, Grave 43).[11]

Thomas was survived by his wife, Helen, their son Merfyn and their two daughters Bronwen and Myfanwy. After the war, Thomas's widow, Helen, wrote about her courtship and early married life with Edward in the autobiography As it Was (1926); later she added a second volume, World Without End (1931). Myfanwy later said that the books had been written by her mother as a form of therapy to help lift herself from the deep depression into which she had fallen following Thomas's death.

Helen's short memoir My Memory of W. H. Davies was published in 1973, after her own death. In 1988, Helen's writings were gathered into a book published under the title Under Storm's Wing, which included As It Was and World Without End as well as a selection of other short works by Helen and her daughter Myfanwy and six letters sent by Robert Frost to her husband.[12]

Thomas is commemorated in Poets’ Corner, Westminster Abbey, London, by memorial windows in the churches at Steep and at Eastbury in Berkshire and with a blue plaque at 14 Lansdowne Gardens in Stockwell, south London, where he was born.[13]

There is also a plaque dedicated to him at 113 Cowley Road, Oxford, where he lodged before entering Lincoln College.[14]

East Hampshire District Council have created a "literary walk" at Shoulder of Mutton Hill in Steep dedicated to Thomas,[15] which includes a memorial stone erected in 1935. The inscription includes the final line from one of his essays: "And I rose up and knew I was tired and I continued my journey."

As "Philip Edward Thomas poet-soldier" he is commemorated, alongside "Reginald Townsend Thomas actor-soldier died 1918", who is buried at the spot, and other family members, at the North East Surrey (Old Battersea) Cemetery.

He is the subject of the biographical play The Dark Earth and the Light Sky by Nick Dear, which premiered at the Almeida Theatre, London in November 2012, with Pip Carter as Thomas and Hattie Morahan as his wife Helen.[16]

The flowers left thick at nightfall in the wood
This Eastertide call into mind the men,
Now far from home, who, with their sweethearts, should
Have gathered them and will do never again.

Thomas's poems are noted for their attention to the English countryside and a certain colloquial style. The short poem In Memoriam exemplifies how his poetry blends the themes of war and the countryside.

On 11 November 1985, Thomas was among 16 Great War poets commemorated on a slate stone unveiled in Westminster Abbey's Poet's Corner.[19] The inscription, written by fellow poet Wilfred Owen, reads: "My subject is War, and the pity of War. The Poetry is in the pity."[20]

Thomas was described by British Poet Laureate Ted Hughes as "the father of us all."[21]

At least nineteen of his poems were set to music by the Gloucester composer Ivor Gurney.[22]

References to Thomas by other writers 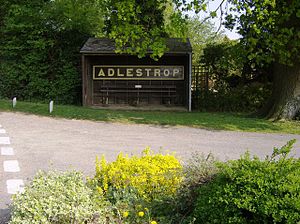 Adlestrop bus shelter with the station sign. Thomas immortalised the (now-abandoned) railway station at Adlestrop in a poem of that name after his train made a stop at the Cotswolds station on 24 June 1914

'Now all roads lead to France/ And heavy is the tread/ Of the living; but the dead/ Returning lightly dance:'