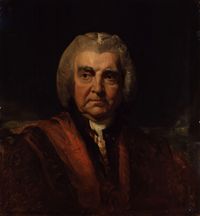 An 1803 portrait of Lord Thurlow by Thomas Lawrence.

Born at Bracon Ash, Norfolk, Thurlow was the eldest son of Reverend Thomas Thurlow. Thomas Thurlow, Bishop of Durham, was his brother. He was educated at King's School, Canterbury and at Caius College, Cambridge.[1] However, he was forced to leave Cambridge in 1751 without a degree after coming into conflict with the authorities of the university. He was for some time articled to a solicitor in Lincoln's Inn, but in 1754 he was called to the Bar, Inner Temple. After a slow start, Thurlow eventually established a successful legal practice. He was made a King's Counsel in 1761 was elected a bencher of the Inner Temple in 1762.[2] 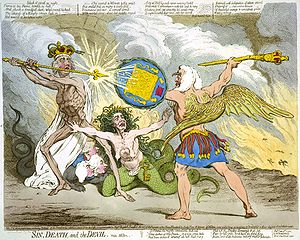 In Sin, Death, and the Devil (1792), James Gillray caricatured the political battle between Pitt (Death) and Thurlow (Satan), with Queen Charlotte (Sin) in the middle, protecting Pitt.

Thurlow then turned to politics, and in 1768 he was elected Member of Parliament for Tamworth as a Tory. Two years later, as a recognition of his defence in the previous January of the expulsion of John Wilkes he was appointed Solicitor-General in the government of Lord North.[2] He held this post until 1772, when he was promoted to Attorney General. He was to remain in this office for six years, during which period he became known as an ardent opponent of the American colonists' strive for independence. He is noted for his defeat in the case of Woodfall, who was publisher of the Letters of Junius, upon which a verdict of mistrial was entered by Lord Mansfield.

In 1778 Thurlow was admitted to the Privy Council, raised to the peerage as Baron Thurlow, of Ashfield in the County of Suffolk,[3] and appointed Lord Chancellor by Lord North. In this post he notably opposed the economical and constitutional reforms proposed by Edmund Burke and John Dunning. The Tory administration of Lord North fell in March 1782, after twelve years in office. The Whigs under Lord Rockingham came to power, but Thurlow nevertheless managed to cling on as Lord Chancellor. Rockingham died in July 1782, but Thurlow remained Lord Chancellor also when Lord Shelburne became Prime Minister. The latter government fell in April 1783, when a coalition government under Charles James Fox and Lord North was formed (with the Duke of Portland as titular Prime Minister). Thurlow was not invited to resume the role of Lord Chancellor, and instead the Great Seal was put into commission. He went into opposition and contributed to the downfall of the coalition in December 1783. William Pitt the Younger then became Prime Minister and reinstated Thurlow as Lord Chancellor. The relationship between Pitt and Thurlow was always fragile, and Thurlow often relied on his friendship with King George III to be able to remain in office. He opposed a bill for the restoration to the heirs of estates forfeited in the Jacobite rising of 1745. Partly to please the king, he consistently and strongly supported Warren Hastings, and negotiated with the Whigs to ensure his continued power in the event of a change of government. In 1792, when he attacked Pitt's bill to establish a fund to redeem the national debt, he was finally dismissed.[2]

As a way of compensation, Thurlow was given a second peerage as Baron Thurlow, of Thurlow in the County of Suffolk, with remainder to his younger brothers and their heirs male.[4] He was never to hold office again and retired into private life. However, in 1797 he intrigued for the formation of a government from which Pitt and Fox should be excluded, and in which the Earl of Moira should be Prime Minister and himself Lord Chancellor.[2] Despite the tacit support of the Prince of Wales the enterprise failed. His last recorded appearance in the House of Lords was in 1802.[2]

Lord Thurlow never married, but left three natural daughters. He died at Brighton on 12 September 1806, aged 76, and was buried in the Temple Church.[2] The barony of 1778 became extinct on his death, while he was succeeded in the barony of 1792 according to the special remainder by his nephew Edward. He was the eldest son of the Right Reverend Thomas Thurlow, Bishop of Durham.

Thurlow appears as a character in Alan Bennett's play The Madness of George III and the subsequent film adaptation, in which he was played by John Wood.